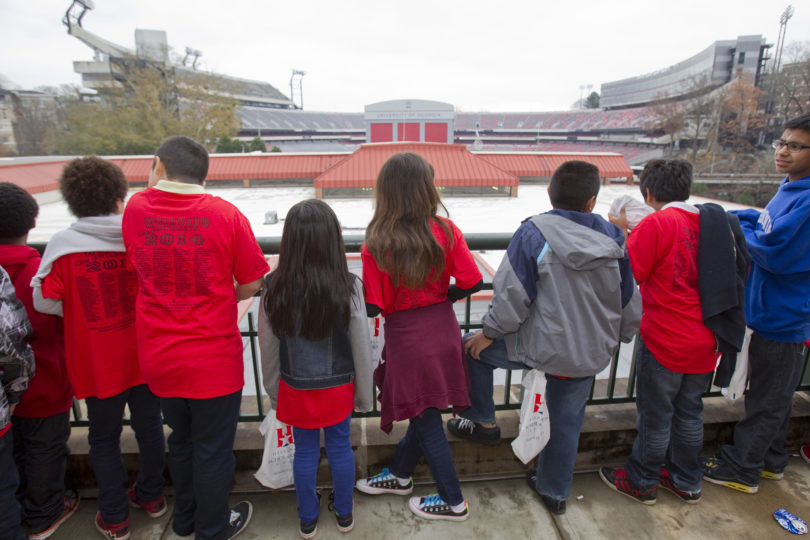 Fifth-graders from Woodward Elementary School in Brookhaven look at Sanford Stadium during a campus tour last month. The students used statistics generated by the UGA football team’s 2013 season to enhance their math skills.

Scarlett Childers may not be a UGA Bulldog fan, but she certainly is making some fifth-graders at ­Woodward Elementary School Bulldog lovers. Childers and her students have studied UGA’s football team as part of a math project this year.

During the just completed football season, the 115 students followed one of five teams—UGA, Louisiana State University and the universities of South Carolina, Alabama and Florida—to track wins and losses. They then used the football scores and statistics to practice their skills with fractions, decimals, rounding, graphing and other math concepts.

“One night, I was looking over some of the standards that the fifth grade covers, and I was trying to come up with different ways of teaching, and I came up with this project,” said Childers, a fifth-grade teacher at Woodward Elementary School and a University of South Carolina graduate and fan. “Our school also is trying to get the students thinking about college and higher education, so I thought this project would put it in their minds or at least get them thinking about it, too.”

Along with her partner teacher, Lynda Cosby-Pinnock, who had the students compose an informational writing piece about UGA, Childers has helped fuel a passion for football and UGA in her students.

“A lot of these children love soccer, so it was something to get them to open up their minds to another sport,” Childers said. “At first they were really resistant, but now they like all sorts of sports.”

Childers said the students also have taken to the lessons and skills that have gone along with the project. She recalled several times when students got stuck on a problem, but were able to complete it after connecting it to concepts learned in the football project.

“When you make those connections, you start to understand things and really learn,” Childers said. “Because of this, the students already know how to do half the standards they’re required to know [for their grade level].”

Another part of the project was a campus visit Childers and her students took in early December. During their day, the DeKalb County students heard about college admissions, talked with students and even toured Sanford Stadium and Stegeman Coliseum.

After a lunch provided by Krystal, UGA wide receiver Chris Conley spoke to the students about the importance of education. Conley told the students he didn’t start playing football until high school, and even then he had to focus on school first.

“People are going to use what you do in the classroom to see what kind of person you are,” he said. “There’s so many opportunities to reach goals you set in your life, but college and higher education are a big one.”

The students, who will be following the UGA basketball and baseball teams for their next projects, also heard from Christopher Lakos, associate sports communications director, who walked them through a stat sheet and gave them some tips.

Julie Munoz, one of the students, said her favorite part was touring Sanford Stadium.

“I liked when we went to the football field; we were running and racing each other,” Munoz said. “It was really some fun.”

“When we were on the field, it was all so cool,” she said.

Childers said her students were really excited during the visit. Coming to the campus, she said, only helps reinforce to them the importance of higher education.

“With this trip I hope that they’re able to really see college,” Childers said. “We’ve been telling them they should have this goal, but they can’t hope to attain that until they really visualize it.

“A lot of these students just don’t have experiences like this, so it’s important for us to provide them at school,” she also said.