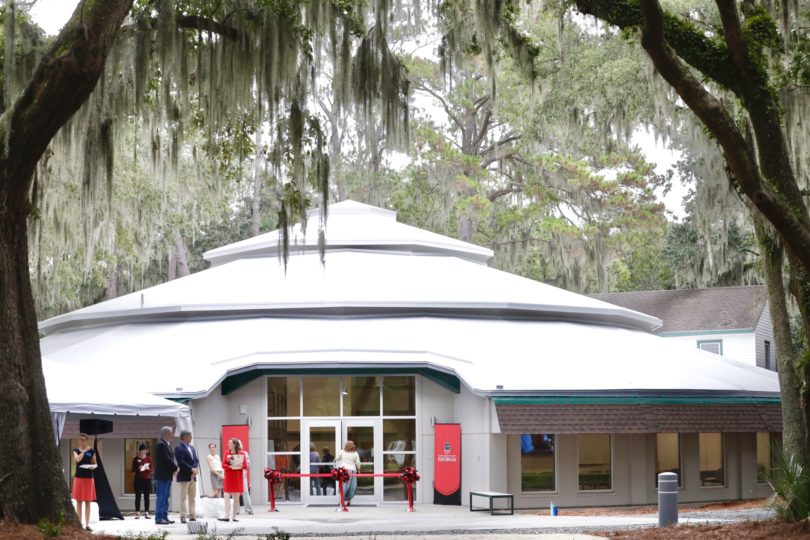 A 71-year-old cattle barn was repurposed as a modern classroom and laboratory building in a dedication ceremony on Oct. 22 at the University of Georgia’s Skidaway Institute of Oceanography.

UGA President Jere W. Morehead presided over the ceremony, which capped the yearlong renovation of the reinforced concrete and steel beam structure that is now known as the Ocean Sciences Instructional Center.

“Today marks the beginning of a new era at the Skidaway Institute as this renovated facility will greatly enhance the educational and outreach capacity of this unique part of the University of Georgia,” said Morehead. “We are especially grateful to our state and local leaders for their support of the project. The Ocean Sciences Instructional Center will support every program at the institute, helping our faculty, staff and students carry out UGA’s vital sea-grant mission.” 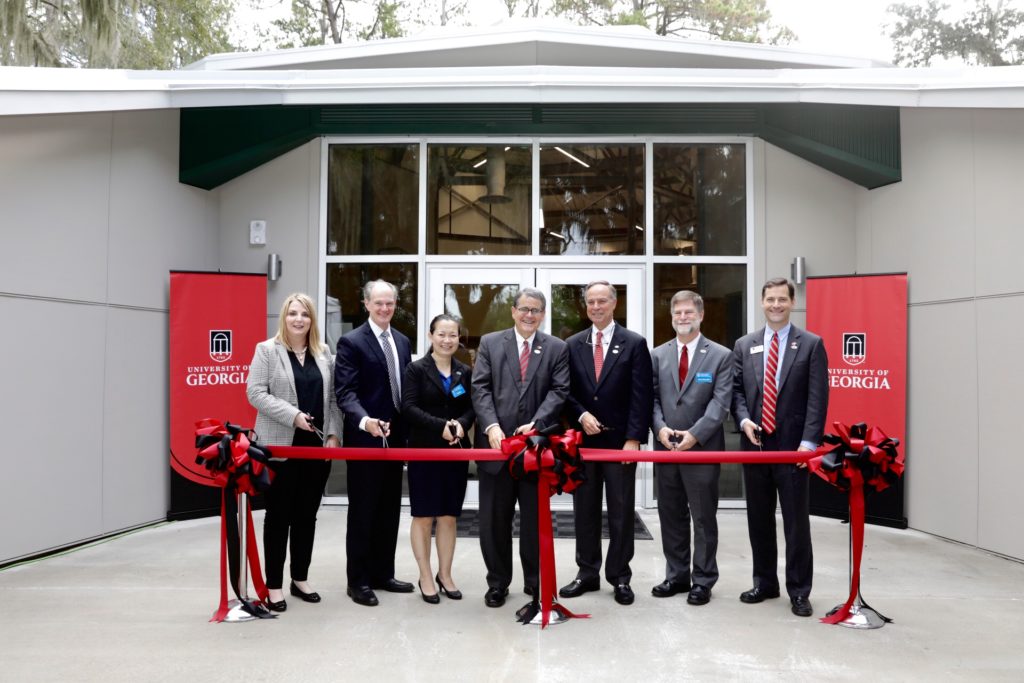 Cutting the ribbon at the dedication were, from left, Jennifer Frum, vice president of public service and outreach; Alan Dorsey, dean of the Franklin College of Arts and Sciences; Kun Ma, UGA and Skidaway Institute graduate student; President Jere W. Morehead; Don Waters, chairman of the USG Board of Regents; Clark Alexander, director of the UGA Skidaway Institute of Oceanography; and Toby Carr, vice president of government relations.

The ceremony also included comments from Board of Regents Chair Don Waters, who represents the 1st Congressional District on the University System of Georgia Board of Regents, and department of marine sciences doctoral student Kun Ma, who is based at Skidaway.

With the support of the Chatham County Legislative Delegation, the Georgia General Assembly appropriated $3 million in 2016 to remodel and repurpose the cattle barn. The new Ocean Sciences Instructional Center contains two state-of-the-art digital classrooms. These can be used by Skidaway Institute-based department of marine sciences faculty to teach courses that include students on the main UGA campus in Athens or for Athens-based faculty to teach students at Skidaway Institute in courses such as marine microbiology, biogeochemistry, physical oceanography and quantitative methods in marine science. 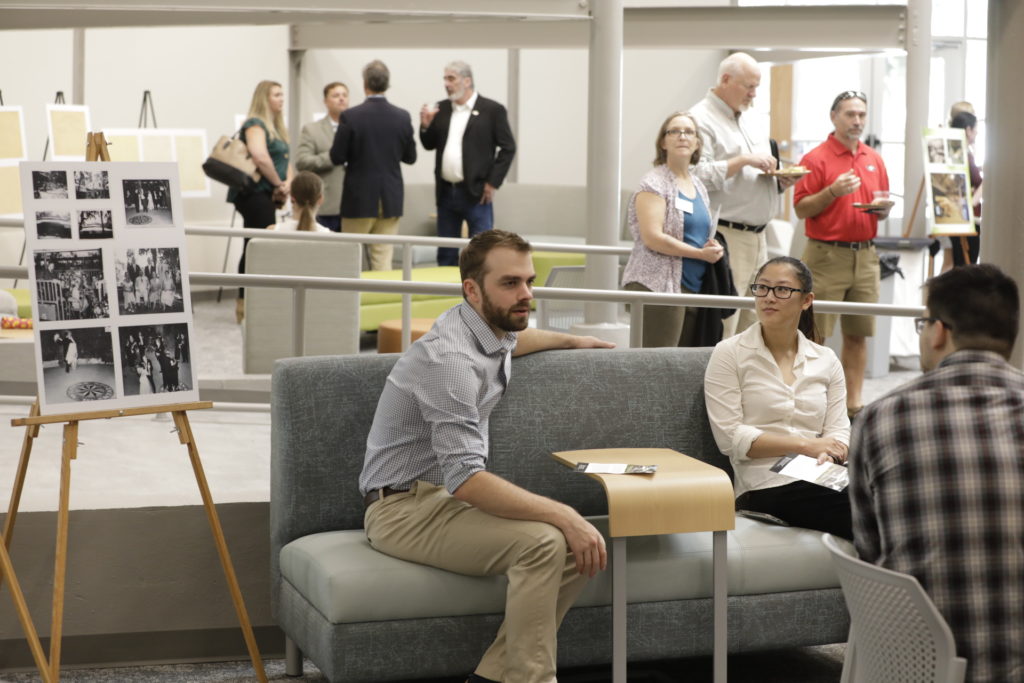 The renovated structure includes a collaborative space in the main section of the building.

The building also houses a teaching laboratory and prep lab designed to support up to 20 students. The intentional design of the teaching lab includes a large observation window that will allow visitors to watch research and instruction in progress. The teaching lab is named for the late Albert Dewitt Smith Jr., a UGA alumnus, in recognition of a gift from his daughter and UGA alumna, Michelle Vine, and her husband, Barry, who live in Savannah.

In addition, the Ocean Sciences Instructional Center offers several faculty offices, as well as ample collaborative space for students and faculty to work together on projects.

The architect for the project was Cogdell & Mendrala. The construction manager was New South Construction.

The building was originally built in 1948 by Robert and Dorothy Roebling, who operated a cattle breeding facility on Skidaway Island. The Roeblings designed the barn as a venue for their annual cattle show, which attracted buyers from around the country and Europe. They built a round structure 110 feet in diameter with a ring of stalls around the perimeter and nursing and holding stalls in the inner circle. It contained a second deck for hay storage and auction seating. At one end were a small silo with a feed mixing room and an attached apartment for a herdsman. 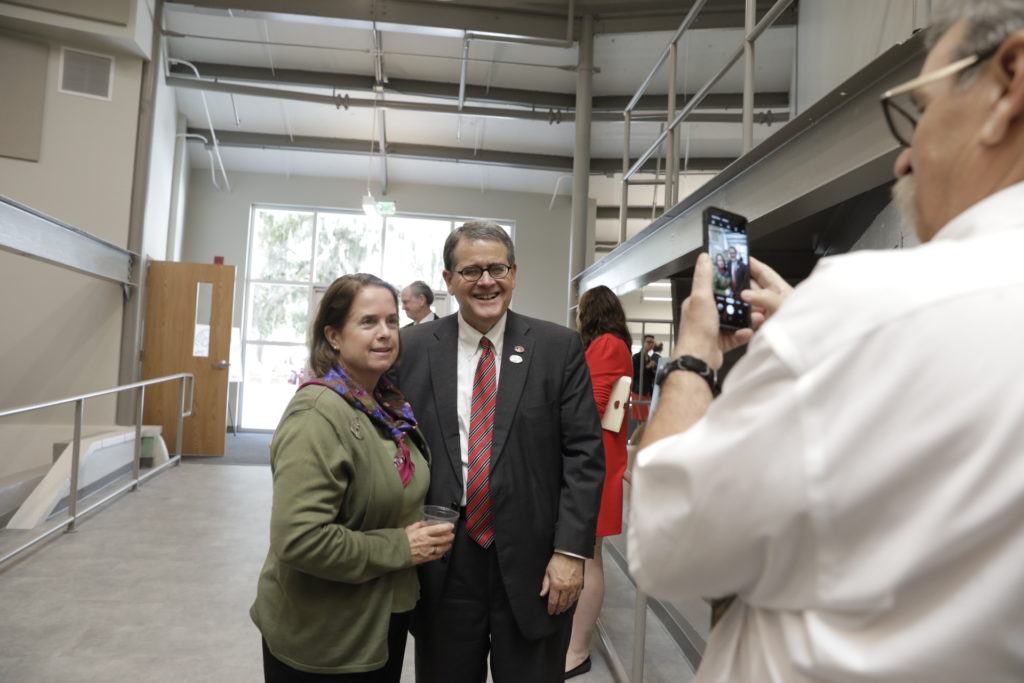 UGA President Jere W. Morehead poses for a photo with Audrey Roebling, a granddaughter of Bob and Dorothy Roebling, who operated the cattle plantation and donated the property to the state. Her father, Wainwright “Rip” Roebling, grew up on Modena Plantation.

In 1967, the Roeblings donated the property to the state of Georgia to create the Skidaway Institute of Oceanography. Since the institute took over the property, the barn has served primarily as storage and as a place to prepare large pieces of equipment for research voyages.

The institute has maintained ties to the Roebling family throughout the years, and several family members were on hand for the dedication.

One of the Roeblings’ sons, Wainwright “Rip” Roebling, described the barn as his father’s pride and joy. “I know Mother and Dad would be very proud of it, just as we are,” he said.