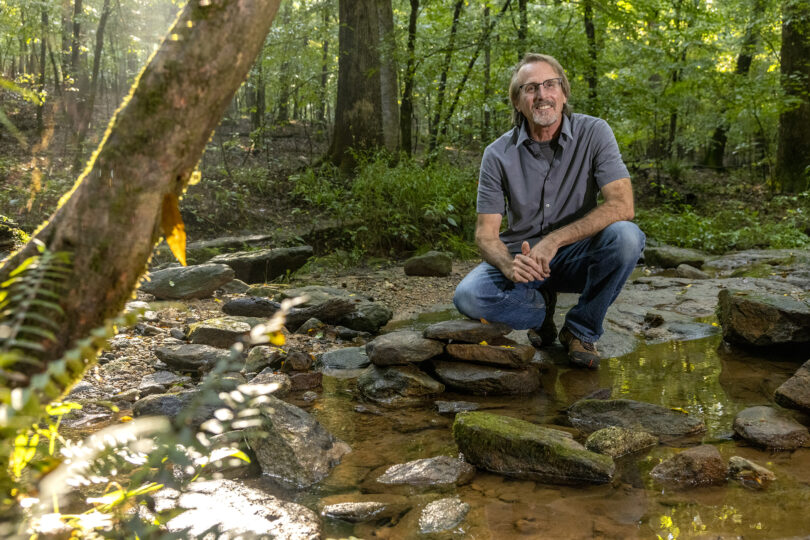 Scott Connelly is a lecturer in the Odum School of Ecology. (Photo by Dorothy Kozlowski/UGA)

When teaching Ecology 3400, Professional Development for Careers in Ecology, one of the things Scott Connelly tells his students is that their career paths are not likely to follow a straight line. That’s a lesson that Connelly, a lecturer in the Odum School of Ecology, has learned firsthand.

Growing up on the shores of Lake Ontario, Connelly spent as much time as he could outdoors.

“All summer long I’d be fishing or catching turtles or frogs and just playing in nature with a raft and fishing pole,” he said. “That was my world, but it never occurred to me that I could make a career out of ecology.”

It wasn’t until years later, having pursued a career in business, that he realized he was in the wrong profession.

“It just occurred to me one day, I can’t keep doing this,” he said. “I want to go back and learn about what I found exciting as a kid.”

An internet search for courses about the subjects that interested him led him to the Odum School—at the time the Institute of Ecology—at UGA. Connelly enrolled, planning to pursue a master’s degree. That changed when Catherine Pringle, Distinguished Research Professor of Ecology, received a grant to study the impacts on tropical stream ecosystems of a deadly chytrid fungus, which was then sweeping through Panama wiping out frog populations. She invited him to join the project as a doctoral student.

“That’s really what set me on my path, getting down there and just getting my hands wet and getting dirty and getting in the field immediately for that part of my graduate work,” he said. “And that led to more of my teaching in the tropics, and doing the research and teaching just kind of built on each other.” 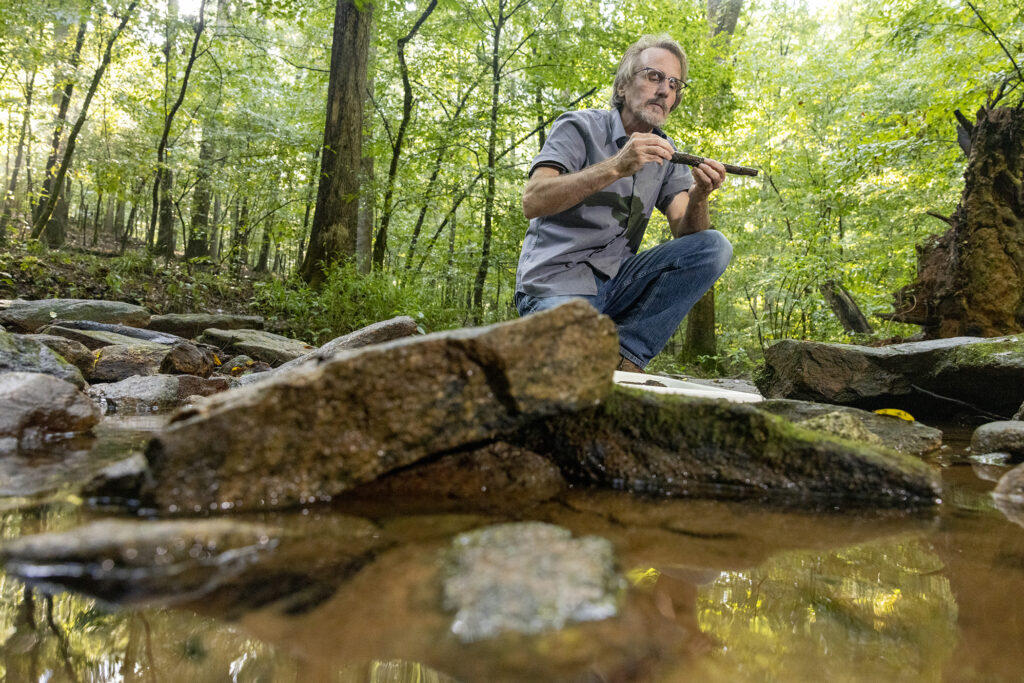 Scott Connelly looks for herps in a stream at the State Botanical Garden. (Photo by Dorothy Kozlowski/UGA)

After finishing his doctorate, Connelly was able to combine his love for the tropics and for teaching when he became the science director for the UGA study abroad program in Costa Rica, teaching tropical ecology and conducting research. After several years in that position, he joined the Odum School as a lecturer as part of UGA’s 2013 hiring initiative focused on teaching emphasis faculty.

“Over time, I gravitated more and more toward instruction, because that was really the most rewarding part of the job for me,” he said. “And I’m grateful that Odum let me push my career path in that direction.”

Connelly continues to lead a Maymester program in Costa Rica, which he was happy to be able to do this year after the disruption caused by COVID-19.

“I’m glad we had the students back down there again,” he said, adding that this year’s program was one of the largest in terms of student numbers. He also expressed gratitude to emeritus faculty Ron Carroll and Carol Hoffman for their support of the program in many ways, including establishing a tropical ecology travel scholarship.

“Ron and Carol have been instrumental in providing the opportunity for more students to study in Costa Rica,” he said.

Besides the Maymester, tropical ecology and professional development courses, Connelly teaches conservation biology, introductory ecology for majors and environmental science for non-majors, which he particularly enjoys.

“Ecology 1000 is a favorite just because it’s a course that students find applicable to their own surroundings and their own life,” he said.

As much as he enjoys the various courses he teaches, Connelly said the most rewarding part of his job is following his students’ progress over the years and seeing where their paths take them.

“I think one of the biggest fears and frustrations of undergraduates is thinking, ‘everybody else knows what they’re doing and I don’t, and I don’t know what my next steps are,’” he said. He and Professor Emeritus Alan Covich, with whom he co-taught the professional development course, do their best to allay those fears.

“Alan is good at convincing students that if you just give this your best shot, and you’re sincere in your efforts, something very likely will turn up that excites you down the road,” he said. “I like to tell them to be prepared, and certainly something will come up that will grab your interest. It took me a long time to find it, but here I am.”