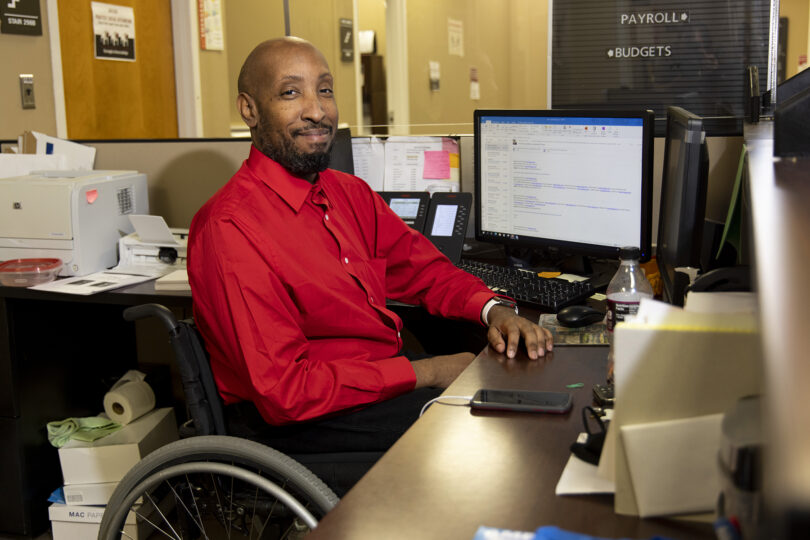 Quincy Kerbo is the office assistant in the travel and encumbrance section of Accounts Payable in the Division of Finance and Administration. (Photo by Andrew Davis Tucker/UGA)

A longtime fan of the Georgia Bulldogs football team, Quincy Kerbo first joined the University of Georgia community as a football fan before applying to become a UGA employee and transitioning to his role as office assistant.

Although Kerbo’s parents are from South Georgia, he grew up a self-described “Army brat” and has lived in multiple U.S. states as well as Ludwigsburg, Germany. He moved with his family back to Georgia in 1999, and then moved to Athens in 2002.

“Moving a lot gave me a chance to meet a lot of great people and develop some great relationships that I still maintain today,” he said. “Living abroad taught me about many different cultures and also the influence that America has on the rest of the world.”

Now, Kerbo is the office assistant in the travel and encumbrance section of Accounts Payable in the Division of Finance and Administration. And in that position, he gets to do it all—receptionist duties, data entry, handling calls and assisting in any way possible. Accounts Payable ensures payments of all non-salary financial obligations owed by UGA. The travel and encumbrance section includes responsibilities like printing checks and approving travel authorizations.

“I work with a great group of folks, and I just feel like it’s my responsibility to do my part,” he said.

According to Kerbo, one of the best things about working in Accounts Payable is the department itself.

“I love the people that I work with, even though I don’t see them that much anymore,” he said. “They make it worthwhile coming in every day, especially some days when we have to work from home. They keep morale up.”

Adapting to the new normal

Although it doesn’t happen as much as it used to, Kerbo said he enjoyed greeting people as they came in and would help lost students find where they needed to be. However, the COVID-19 pandemic changed that.

“My favorite part, I would say, is when we were under normal times, interacting with the people that came in,” he said. “I got to put faces with the names of people that I have to speak to across campus … and I got to know a lot of people that way.”

In the future, he aims to continue doing what he loves—helping others at UGA and developing his own business.

“I’d like to be still working for UGA in some capacity and growing my little business on the side, but ultimately, I’d like to still be here at UGA,” Kerbo said. “It’s one of the best places I’ve ever worked, and I love the environment.”

Life as a business owner

When he’s not tackling all his responsibilities as office assistant, Kerbo enjoys watching movies—particularly in the Marvel universe—and spending time with his four nephews.

Kerbo also has a small business with his brother and a friend of theirs. The business, named after his nephews, is called Neil Nyrone. Here, Kerbo and his business partners specialize in making fashion accessories such as bowties. For the past six years, they’ve been doing what they love and generating a following.

“The little following that we have—people really like them,” he said. “It’s a passion of ours.”

Kerbo’s expertise and his knack for helping people definitely works twofold, both in his work at UGA and for his business.

“The best part of having this business on the side is having happy customers. Seeing the pride in their faces when they receive one of our products makes it worthwhile,” he said.

And he hopes the customers he helps at UGA are just as happy.