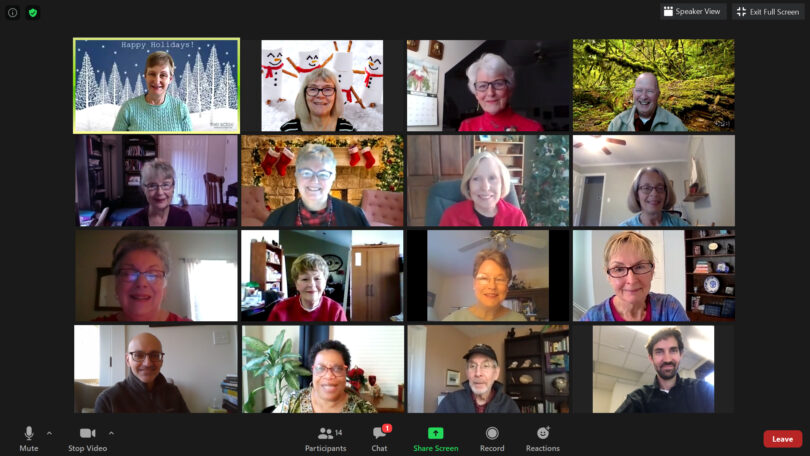 When the COVID-19 pandemic hit Athens in March, the university’s shutdown impacted learning beyond traditional student instruction. The closure of in-person classes, lectures and activities required more than 1,200 older adult learners in OLLI@UGA to adapt to new technology, which meant a high-learning curve for many of the retirees.

OLLI@UGA, one of 124 institutes in the national Osher Lifelong Learning Institute network, is a College of Education program housed at Rivers Crossing. OLLI@UGA is comprised of adults 50 and older, with the majority in the most COVID-vulnerable risk group above 65. For a program whose face-to-face format is known for strengthening relationships vital to members’ mental and social well-being, the shutdown was potentially devastating.

“We spent all of spring break anticipating a shutdown to enable us to start Zoom classes the Monday after spring break,” said Meehan. “Even then it was clear that older adults were at risk, and we were prepared to keep our members safe by producing socially distanced programming.”

According to Meehan, some of the hands-on classes that involved cooking or handling geological specimens, as well as social groups like the hikers and pétanque players, didn’t translate well into a virtual format and were canceled. Other classes were paused to give staff and instructors time to adapt.

When they decided to extend Zoom classes into the summer and fall semesters, OLLI@UGA staff began helping the presenters and participants get comfortable with Zoom video conferencing.

“Some members took to Zoom more than others. It’s not quite the same as being in person, but this allows our members to keep in touch with each other while keeping their minds stimulated,” Meehan said.

Rosemary Woodell, like most of her OLLI@UGA friends, is from the generation that endured two major wars, social unrest and a polio epidemic. Woodell believes that one should “bloom where you’re planted,” so she adapted quickly to the change and leaned into the new format. Although she misses going to classes at River’s Crossing, Woodell is grateful for the virtual format to reconnect with her friends in a time of isolation.

“The fact that we can have Zoom classes is such a blessing. It’s a bonus to see (friends’) faces and hear their voices in the online sessions,” Woodell said.

Navin Patel has taken a number of Zoom classes since March and enjoys the mental stimulation in a wide range of subjects and experiences.

“It’s been a real pleasure to meet people with similar interests,” he said.

Meehan and his team modified around 270 classes to 150 across both halves of the fall semester. Some of the shared interest groups like the Memoir Writing Group have strengthened their memberships.

“The average class size experienced a small drop, but there are still enough participants to make the classes enjoyable,” Meehan said. “The staff and OLLI@UGA members have been amazing—it’s not what we’d planned for this year, and the large amount of unknowns has made things a lot harder. But a lot of OLLIs nationwide had to pause their classes for a length of time, so we were fortunate to adapt so well.”

Spring online classes begin in February, and Meehan plans to move the program forward with a safe return to River’s Crossing later in 2021.