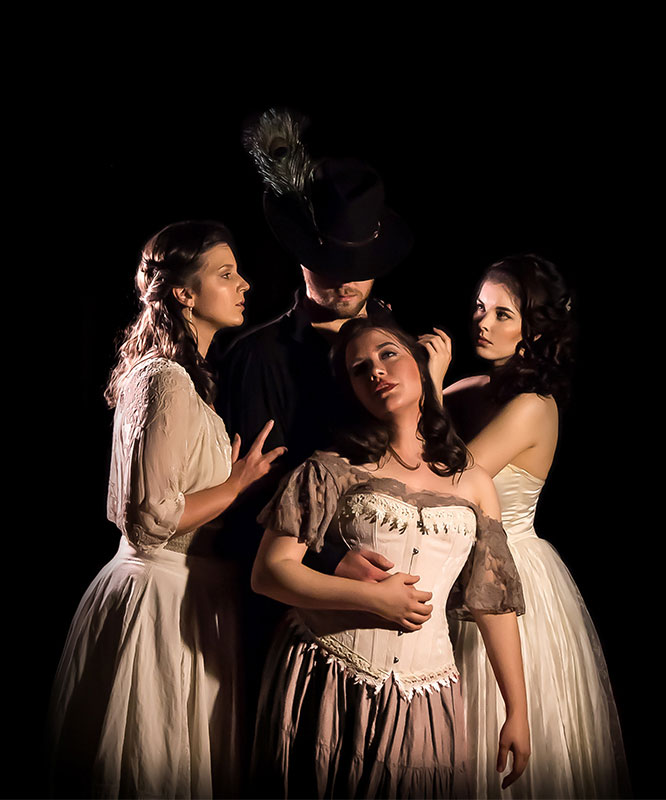 The UGA Opera Theatre’s spring production of Mozart’s “Don Giovanni” will bring the talented singing actors of the Hugh Hodgson School of Music back to the UGA Fine Arts Theatre for three performances Feb. 10 and 11 at 8 p.m. and Feb. 12 at 3 p.m.

This version of the classic Don Juan tale is a cornerstone of opera repertoire, according to Frederick Burchinal, the Opera Theatre’s director.

“As a great work of operatic and musical art, ‘Don Giovanni’ always ranks in the top ten of the most favorite and well known, most attended and most produced operas of the entire repertoire,” Burchinal said. “Historically, it has been considered by most to be one of the greatest works ever written.”

Indeed, the opera has drawn praise from all corners for centuries—even famed Danish philosopher Soren Kierkegaard wrote that “Mozart’s ‘Don Juan’ occupies pride of place among all classical works of art.”

Perhaps part of what makes the opera so highly regarded is the musical mastery demanded by a Mozart composition. Burchinal believes that Mozart’s music is both a challenge and necessity for singers to master and incorporate into their repertoire.

“Whether intended or not, Mozart has written music that tests the technical abilities of every singer to produce vocally and musically the pure beauty of tone combined with precision of execution,” said Burchinal.

He is confident his group of singing actors—”an outstanding group whose talents seem ideally suited to take on their roles, vocally and dramatically”—are up to the task.

Audiences will recognize many of the performers from recent performances with the UGA Symphony Orchestra, the Hodgson School’s Choral area and even the theatre and film studies department, with which the lead of “Don Giovanni,” Isaiah Feken, performed as the titular Sweeney Todd in April 2016.

Joining the Hodgson School students are Maestro Hilary Griffiths as conductor of the UGA Opera Orchestra and Vince Liotta as stage director. Liotta has worked with the UGA Opera Theatre on multiple past performances, and Griffiths is a newcomer.

“Our guest artists have long international careers in opera and the experience of producing productions of ‘Don Giovanni’ worldwide,” said Burchinal.

Tickets to the concert are $20 each or $6 with a UGA student ID and can be purchased at pac.uga.edu or the PAC box office.