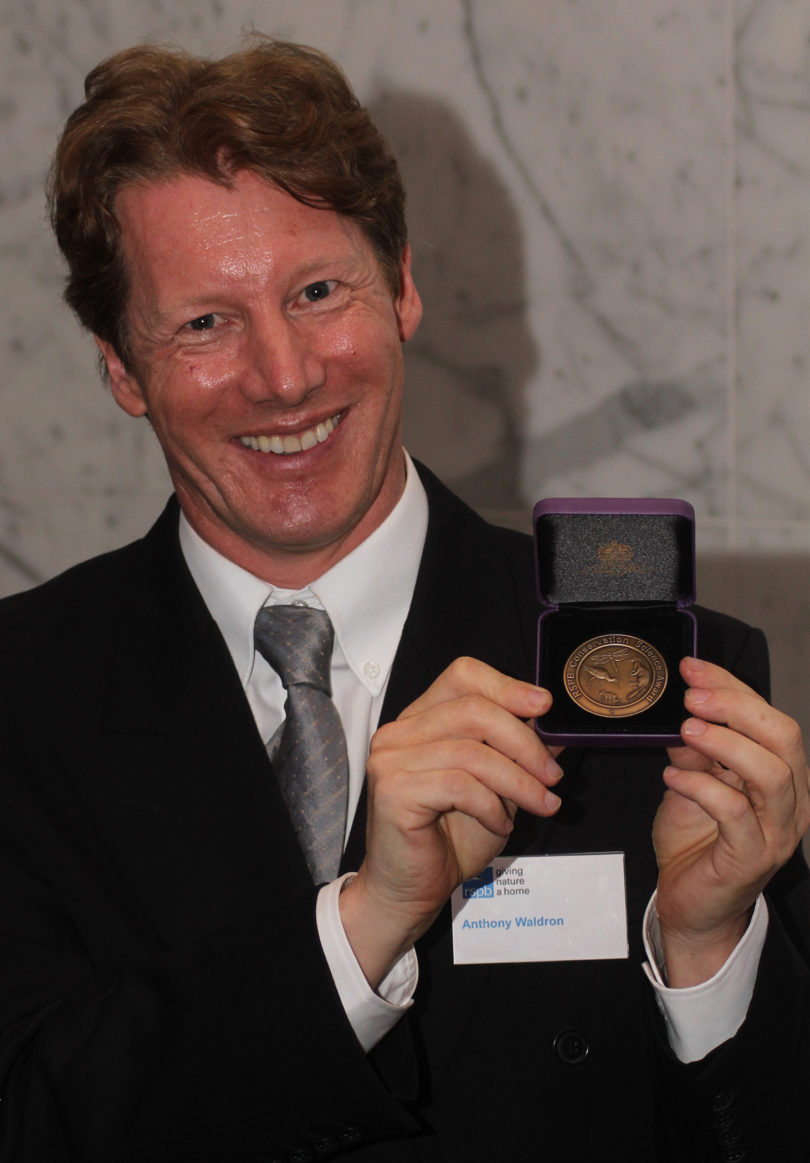 Athens, Ga. – The authors of a University of Georgia study on global conservation funding have received an inaugural Conservation Science Award from the Royal Society for the Protection of Birds. Lead author Anthony Waldron, a former postdoctoral associate at the UGA Odum School of Ecology now at Oxford University, accepted the award on behalf of his co-authors at a ceremony on Feb. 26 at the Royal Society in London that marked the launch of the RSPB Centre for Conservation Science.

The study, which appeared in the Proceedings of the National Academy of Sciences in 2013, collated information on biodiversity conservation funding worldwide and modeled the distribution of funding to show which countries have major conservation finance shortfalls. The paper also pointed out that for many of the world’s most species-rich countries, a modest increase in funding could make a surprisingly large difference to conservation, generating a major improvement in overall global conservation for relatively little money.

David Gibbons, head of the RSPB Centre for Conservation Science, presented the award for a paper of great conservation importance to Waldron. He said that RSPB scientists selected 15 candidate papers from the global scientific literature and then voted for the paper they thought most deserving of the award. “There was a clear winner,” he said.

Gibbons said the study helps fill a crucial knowledge gap. “Prioritizing conservation spend toward those countries where you will get the biggest bang for your buck could be an effective global strategy, but there has been a real lack of information to guide such an approach,” he said.

With more than one million members, the RSPB is the United Kingdom’s largest conservation organization, as well as one of the oldest. Formed in 1889 to fight the trade in egret plumes and other feathers used in fashionable women’s hats, the RSPB now conducts field research, monitors species, promotes conservation policy and manages more than 200 nature reserves, with international projects from Sierra Leone to Kazakhstan to the Caribbean.

The organization’s new initiative will focus on finding solutions to 21st century conservation problems. An online research hub, www.rspb.org.uk/science, will house a database of hundreds of peer-reviewed papers by RSPB scientists. The Centre also will recognize the work of conservation scientists in the U.K. with three annual awards.

“This recognition from the RSPB is most appreciated,” said John Gittleman, dean of the UGA Odum School of Ecology and one of the paper’s coauthors. “It’s important that this award is really given to Dr. Waldron because of the painstaking effort he put into gathering a tremendous global database on conservation funding.

“It’s also valuable to recognize that economics is at the heart of great conservation, that some countries around the world are passionate about conserving their species biodiversity and that we should all be vigilant in how we use our budgets for conservation efforts.”

Waldron said that the award came as a complete surprise. “Conservation is the ultimate applied science and yet academic conservation scientists sometimes wonder whether we are doing more than filling journal space,” he said. “I was pleased and inspired to find that conservation practitioners in the RSPB and, we have now been told, in other international organizations, are both reading and using the results of our work.”

Support for the study was provided by the Natural Sciences and Engineering Research Council of Canada, the Odum School of Ecology and the MacArthur Foundation’s Advancing Conservation in a Social Context research initiative. The paper is available online at http://www.pnas.org/content/early/2013/06/26/1221370110.full.pdf+html.