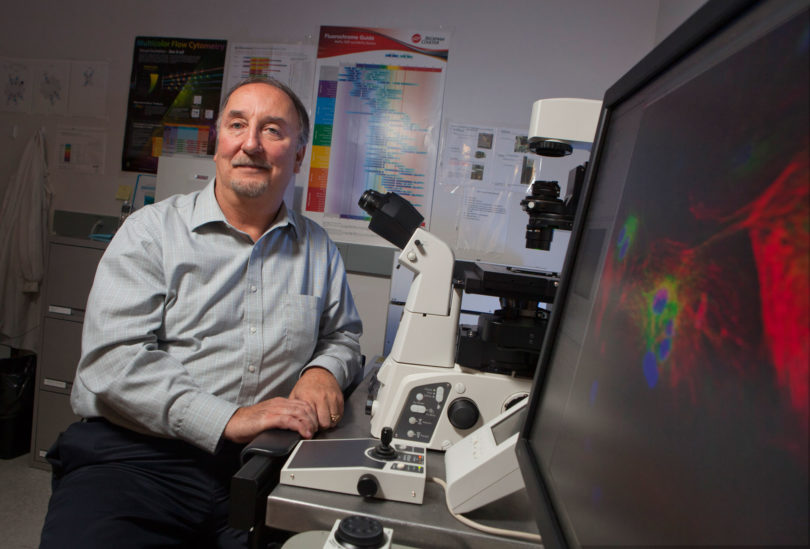 Athens, Ga. – On the list of undesirable medical conditions, a parasitic worm infection surely ranks fairly high. Although modern pharmaceuticals have made them less of a threat in some areas, these organisms are still a major cause of disease and disability throughout much of the developing world.

But parasites are not all bad, according to new research by a team of scientists now at the University of Georgia, the Harvard School of Public Health, the Université François Rabelais in Tours, France, and the Central South University, Changsha, Hunan, China.

A study published recently in Nature Medicine demonstrates that once inside a host, many parasitic worms secrete a sugar-based anti-inflammatory molecule that might actually help treat metabolic disorders associated with obesity.

The sugar molecule, or glycan, is released by parasites to help them evade the body’s immune system. By reducing inflammation, they are better able to hide in tissues, and humans experience fewer symptoms that might reveal their presence.

“Obesity is an inflammatory disease, so we hypothesized that this sugar might have some effect on complications related to it,” said Donald Harn, study co-author who worked on the research while at Harvard School of Public Health and is now Georgia Research Alliance Distinguished Investigator in the UGA College of Veterinary Medicine’s Department of Infectious Diseases.

The researchers tested their hypothesis on mice fed a high-fat diet. Those in the control group exhibited many of the symptoms associated with excessive weight gain, such as insulin resistance, high triglycerides and high cholesterol.

Mice that received treatment with the sugar still gained weight, but they did not suffer the same negative health effects as those in the control.

“All of the metabolic indicators associated with obesity were restored to normal by giving these mice this sugar conjugate,” said Harn, who is also a member of UGA’s Faculty of Infectious Diseases and the Center for Tropical and Emerging Global Diseases. “It won’t prevent obesity, but it will help alleviate some of the problems caused by it.”

The same sugars excreted by the parasites are also found in the developing human fetus and in human breast milk, which Harn suspects may establish proper metabolic functions in the newborn infant. Beyond infancy, however, sugar expression is only found on a few cells, and the only external source for the sugar is parasitic worms.

Because parasites co-evolved with mammals over millions of years, some scientists believe that the relationship between humans and worms is more symbiotic than parasitic, and that small worm infections might actually have some benefits.

“Prevalence of inflammation-based diseases is extremely low in countries where people are commonly infected with worms,” Harn said. “But the minute you start deworming people, it doesn’t take too long for these autoimmune diseases to pop up.”

This doesn’t mean that people should actively seek out parasitic infections as treatment, he said. But it is an indication that the compounds secreted by worms may serve as the basis for future therapies.

In addition to obesity-related disease, Harn and his colleagues have demonstrated that the sugar molecule released by parasites may alleviate a number of other serious inflammatory medical conditions.

It may work as a treatment for psoriasis, a disease that causes skin redness and irritation. The sugar also appears to serve as a powerful anti-rejection drug that may one day be used in patients who have received organ transplants. And it has been shown to halt or even reverse the symptoms of multiple sclerosis in mice.

More research is needed before this sugar molecule can be tested in humans, but Harn and his colleagues are hopeful that they can create effective treatments that provide all the benefits of parasitic worms without the worms themselves.

“We see great promise in this sugar, and we hope that future research and collaborations will eventually lead to marketable therapies for people suffering from disease,” he said.

UGA College of Veterinary Medicine
The UGA College of Veterinary Medicine, founded in 1946, is dedicated to training future veterinarians, conducting research related to animal and human diseases and providing veterinary services for animals and their owners. Research efforts are aimed at enhancing the quality of life for animals and people, improving the productivity of poultry and livestock and preserving a healthy interface between wildlife and people in the environment they share. The college enrolls 102 students each fall out of more than 800 who apply. For more information, see www.vet.uga.edu.