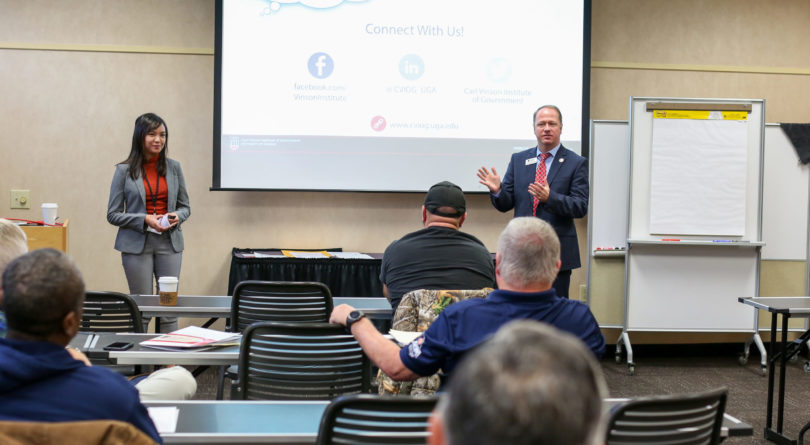 Angela Nguyen has been sheltering at home since March, but the University of Georgia College of Engineering graduate student is still hard at work researching how to help Georgia communities — specifically smaller communities — better care for their bridges.

Nguyen is the second graduate assistant from the University of Georgia to work with the American Public Works Association Georgia chapter in as many years, thanks to a partnership with the Carl Vinson Institute of Government and the UGA College of Engineering. The program, developed by Walt McBride, a senior public service associate at the Vinson Institute, partners an engineering graduate student with the APWA Georgia chapter to help Georgia communities address infrastructure challenges they may not be able to handle on their own.

Nguyen didn’t see herself in this situation as she moved closer to finishing her undergraduate work last year. The daughter of a Vietnamese immigrant and the first in her family to go to college, she felt that graduate school was too expensive and instead had her eye on the workforce once she had her civil engineering degree in December.

But Stephan Durham, professor and assistant dean for student success and outreach with the College of Engineering, suggested Nguyen stay in school, earn a master’s degree from UGA, and work as a graduate assistant with the APWA Georgia chapter—a yearlong arrangement that Nguyen considered a “no-brainer.”

“I never really thought of doing grad work, because it was always a financial issue,” she said. “Dr. Durham said that I would really fit with his program and that the topic of the research would interest me, because I am interested in bridges and that sort of infrastructure. Also, it would only take a year, I’d be doing great work, and it would also be funded by APWA.”

Nguyen’s research is focused on developing an asset management plan specifically for bridges, with the aim of creating an easy-to-follow guide for communities to use. The goal is to help municipalities learn how to better monitor the status of their bridges and become more proactive in their maintenance — something that would help prolong the structure’s life and ultimately save taxpayers’ money.

The project builds on the work of Caroline Dickey, a 2019 Double Dawg who served as the APWA Georgia chapter’s first grad student in 2019. Dickey focused her research on the larger umbrella of asset management, a need many APWA members mentioned as a top priority.

For her final project, she put her thesis into practice and created a step-by-step asset management guide specifically for Washington County, a UGA Archway Partnership community. The experience opened her eyes to an area of engineering she hadn’t considered.

“I’ve been able to use my experience from that in the job that I’m doing now, which has been really cool,” said Dickey, who works at the Kercher Group in Raleigh, North Carolina, where she helps municipalities across the country manage their assets. “I feel like now I’m in a supporting role for local governments, to be a consultant with them. I really took my experience in grad school as sort of a springboard into what I wanted to do. I didn’t really know that I could do asset management as a job.”

The APWA Georgia chapter was impressed enough with Dickey’s work to fund a second graduate assistantship this year and plans to continue for a third year if its budget allows.

“I think it’s been a win-win,” said Stan Brown, APWA Georgia chapter board member. “It’s been great for the students. It gives them something that they can have a point of pride in, knowing that they’ve done something that will help cities and counties in Georgia. And at the same time, it’s given us something that we can use.”

Still in the early stages of her study, Nguyen hopes to produce a similar guide for a Georgia community in need. While working at home with her mother and two younger sisters, she has remotely surveyed and interviewed several Georgia communities—large, medium, small and rural—and has begun compiling a list of potential cities and counties to serve as test subjects for her work.

“For us, it’s exciting to be able to go and test it and see the potential impact of this work on communities throughout Georgia while partnering with other Public Service and Outreach units,” Durham said. “That’s broadly what UGA wants to do, serve the state, and that’s what we’re doing with this.”