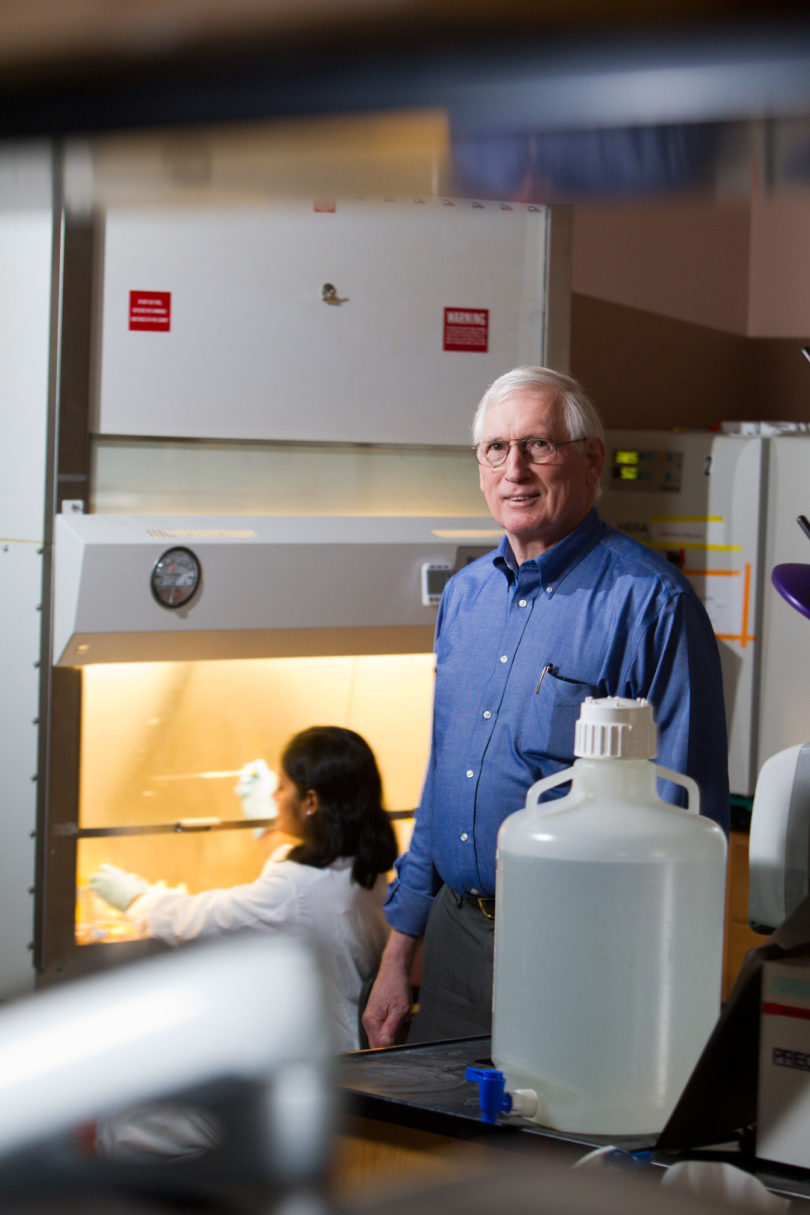 For more than a decade

Athens, Ga. – Clifton A. “Cliff” Baile, a D.W. Brooks Distinguished Professor and GRA Eminent Scholar in Biotechnology at the University of Georgia whose recent research focused on the physiology and biochemistry of obesity and bone disorders, died May 19 following a cerebral aneurysm. He was 74.

His memorial service will be held Monday, June 30, at 11 a.m. at Athens First United Methodist Church.

Baile joined UGA in 1995 after several decades spent on a career path that alternated between academia and industry. Most recently, he was named the director of the university’s campus-wide Obesity Initiative, which launched in January 2012.

“Cliff Baile was an extraordinary Eminent Scholar who crossed disciplinary lines to bring the entire campus community together around the Obesity Initiative,” said UGA President Jere W. Morehead. “He was a beloved figure at the University of Georgia, and I join in the deep grief over his loss.”

Baile was housed in both the College of Agricultural and Environmental Sciences department of animal and dairy sciences and the College of Family and Consumer Sciences department of foods and nutrition. The joint appointment-along with an extensive research background in nutrition-afforded him the opportunity in the summer of 2011 to start pulling together a diverse group of faculty, staff and administrators who all had the desire and expertise to address childhood and adult obesity.

“In a few short years, Cliff Baile’s vision for the UGA Obesity Initiative has become a reality,” said Lynn Bailey, who is head of the department of foods and nutrition in the College of Family and Consumer Sciences and chair of the initiative’s maternal and childhood obesity team.

The very first meeting of the Obesity Initiative-before it was an official directive of the university-happened in January 2011, according to Anne Sweaney, then the interim dean of the College of Family and Consumer Sciences who is now a professor emerita. Baile was in the hospital for knee-replacement surgery, and “we had the meeting with him on the speaker phone,” she said. He was appointed the initiative’s director in June of that year.

Through initial face-to-face meetings with 200 interested faculty members, Baile was able to harness the power of UGA to focus the obesity effort through research, outreach-involving 4-H, UGA Extension and other programs-and teaching.

“It’s just amazing all that he was able to accomplish in that short period of time,” Sweaney said. “It’s very, very inspiring.”

Baile received a doctorate in nutrition from the University of Missouri in 1965 after completing a bachelor’s degree in agriculture and business from Central Missouri State University in 1962. He started his professional career in 1964 as a National Institutes of Health Research Fellow at the Harvard University School of Public Health’s department of nutrition.

In 1971, Baile left his position as an assistant professor of nutrition at Harvard and accepted an offer at Smith, Kline & French to head a program in neurobiological research. He later joined the University of Pennsylvania School of Veterinary Medicine and was appointed a professor of nutrition in 1979. He was awarded an honorary master’s degree by the University of Pennsylvania.

“Cliff was a force to be reckoned with, and he positively impacted a great many people here at the university,” said David Lee, UGA vice president for research. “He was filled with energy and determination and a strong desire to improve the institution. He leaves a lasting legacy through his efforts to recruit outstanding researchers to UGA, assist faculty with new company startups, and organize and lead the campus-wide Obesity Initiative. He was a unique individual and he will be sorely missed.”

Baile founded eight biotech companies while at UGA and helped secure millions in grants and contracts for research. He leveraged a heightened understanding of transferring research results to industry, so much so that his role at UGA was cited in the journal Nature as a model for others to emulate.

“Dr. Baile touched so deeply so many at UGA,” said J. Scott Angle, dean and director of the College of Agricultural and Environmental Sciences. “We are devastated by his passing. His work will go on, but it will never be the same.”

“Cliff was known for his incredible discipline,” said Margaret Wagner Dahl, now associate vice president for health information technology at the Georgia Institute of Technology, “but he also had real intuition about who needed to know who to get something really important accomplished. And this extended far beyond the university to his connections all over the world.”

Baile’s most recent focus as director of the Obesity Initiative had him leading more than 130 UGA faculty members in 14 collaborative teams focused on areas ranging from basic research on obesity, metabolism, genetics and disease to the development of pharmaceuticals, gaming and mobile technologies and programs on after-school exercise, obesity education, prevention and treatment.

“Cliff Baile touched so many here at UGA from graduate students, staff, faculty and administrators,” said Deborah Murray, associate dean for Extension and outreach in the College of Family and Consumer Sciences. “He always valued everyone and never discounted what you were or who you were. He knew that if we were going to tackle obesity we all had to work together. He loved UGA and the people who worked here.”

Baile’s awards were numerous, and so was his peer-reviewed research. Of the more than 360 scientific papers he has in print, 120 have been published since 1995 in addition to over 100 abstracts and invited lectures. He held 19 patents.

He was presented alumni awards from the three colleges he attended as a student: McPherson College Alumni Citation of Merit in 2007, University of Missouri Alumni Association Faculty-Alumni Award in 2009 and the University of Central Missouri Distinguished Alumni Award in 2010. He was named an American Society of Animal Science Fellow in 2009 and an American Association for the Advancement of Science Fellow in 2011. He also received the UGA Lamar Dodd Award in 2002 in recognition for success in encouraging the agricultural biotechnology industry in Georgia. In 2003, the Georgia Biomedical Partnership presented him with a community award for putting UGA “on the map as one of the most active biotech business incubation centers in the Southeast.”

A major part of his effort at the university involved mentoring graduate students and postdoctoral fellows. He also taught a First-Year Odyssey seminar on adult and childhood obesities.

He is survived by his wife, Beth, their children Christopher and Marisa and five grandchildren.

“It is a tremendous loss, but somehow I know it isn’t a loss because those of us who worked with Cliff will not let the work he started end here,” Murray said. “Cliff would expect no less of us.”