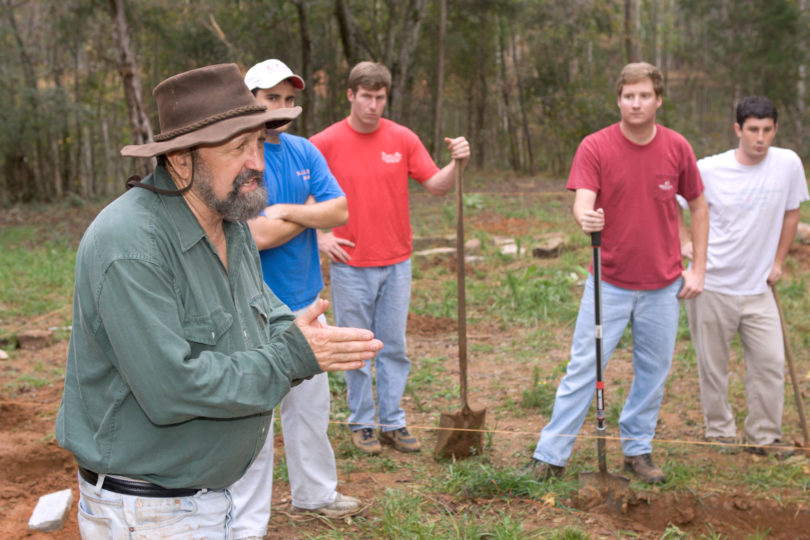 Professor Bob Rhoades discusses the building of a log cabin with UGA students at Pioneer Village.

Around 2,500 years ago, predecessors to Cherokee and Choctaw Indians grew corn, squash and beans there. Around A.D. 1800, early European pioneers farmed tobacco and indigo on a small scale, and eventually started to grow cotton. From 1875 to 1960, yeoman farmers grew crops of cotton and soybeans, starting to degrade the land in the process.

It’s true: Neighborhood sub-divisions are popping up all along Smithsonia Crawford Road in Crawford, where Agrarian Connections-a 312-acre farm Rhoades bought in 1993, and the site of the historic Indian, pioneer and yeoman farms-is located.

But while new construction surrounds the farm, Rhoades and his anthropology students are dedicated to making this land something different: a re-creation of the past, where someday soon people can visit a patchwork of rolling fields, undisturbed piney woods, restored log cabins and heirloom gardens, livestock and orchards.

“This is where we want the past to meet the future,” Rhoades said.

Rhoades’ annual historical ecology class-the next one will be held this spring-has already helped renovate several log cabins along the property. Now, in addition to using the land as headquarters for the Southern Seed Legacy and Southern Heritage Orchard projects, Rhoades will combine teaching with providing an educational service to the community in recruiting his students to help build a “Trail of Time.”

Rhoades and his students have identified the three historical farming sites at separate locations along the banks of Grove Creek, a waterway that twists through the farm and leads to the Broad River.

Rhoades envisions a sort of historical re-creation, open to the public within the next five years, that people could tour on foot, horseback or wagon, visiting re-created lodgings and learning about how their ancestors farmed and lived.

“Our purpose is to teach about agriculture, how we practiced it in the past, what we’re doing now and hope for the future,” said Rhoades. “Our teaching mission is to take the history of this place and look at how the human population over the past thousands of years have utilized the land through agriculture.

“Our image of the future is looking to the past and learning about the land, so we can design a more sustainable future,” he added.

Building the “Trail of Time” is just one way his students are able to look to the past for future solutions.

The seed legacy project has coordinator Jim Veteto, a doctoral student in anthropology, tilling a garden full of rare plants-like Nankeen cotton, which was grown on Louisiana plantations in the 1800s by slaves for their personal use, and several varieties of peas-both on the farm and in his own yard.

Through the heritage orchard project-coordinated by Susannah Chapman, a doctoral student in anthropology, and Tad Brown, a recent UGA graduate with a history degree-96 rare apple trees are thriving, and more will be added this winter along with heirloom fig and peach trees.

“At one time there were approximately 1,600 apple varieties in the Southeast,” said Chapman.

“Eight hundred have gone extinct or are not able to be located. These are 96 of the 800 remaining varieties.”

Students collect seeds and plants while learning about agricultural histories and the people who grew them, collecting cultural knowledge that Virginia Nazarea, UGA anthropology professor, co-founder of the Southern Seed Legacy and Rhoades’ spouse, calls “memory banking.” And in the process of working on the farm, students are waking up to their role in the future of agriculture.

Chapman had done some farming before taking Rhoades’ class, but “when I came out here, I realized the sheer diversity of the plants used by the people who came before me in the Southeast,” she said.

“It really turned me onto biodiversity on a larger scale.”

Working on the orchard project has “definitely affected how I think about food and my own diet,” says Brown.

“Our food system is really not healthy, and it will get more expensive as well,” said Rhoades.

“The young people, many of them realize the dangers inherent in a food system controlled by fewer people, and dependent on chemicals. There are alternatives cropping up, and the future lies in people like Susannah and Tad.”