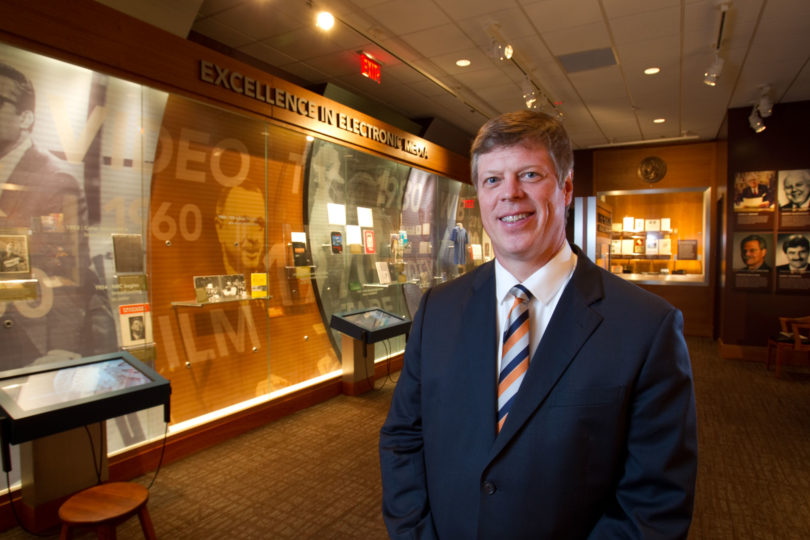 Jeffrey P. Jones, the new director for UGA’s Peabody Awards program, said the award has been called the “Pulitzer Prize for electronic media” and a “crown jewel” for the university.

The Peabody Awards, which are administered through the Grady College of Journalism and Mass Communication, recognize distinguished achievement and meritorious service by broadcasters, cable programmers and Internet-based producing organizations and individuals. The Peabody, which began in 1941, is the world’s oldest award for electronic media.

While the Peabody Awards are already something for UGA to be proud of, Jones hopes to usher the awards to greater visibility in the national public consciousness.

“We very much want to bring Peabody squarely into the digital age,” said Jones, who also holds the Lambdin Kay Chair in the Grady College. “We want to recognize winners not just by handing them a statuette, but by calling attention to their good work in a much more nationally prominent way.”

Jones is a TV studies scholar who also has a background in teaching political communication and documentary. He joined UGA in July after serving as an associate professor at Old Dominion University and director of its Institute for Humanities.

Jones’ writing has examined the intersection of TV and politics, which makes him no stranger to recent Peabody-winning TV shows such as The Wire, The Colbert Report and Homeland.

What distinguishes these programs, as well as other recipients in documentary, radio and webcasting, for Peabody Awards is not just their entertainment value and craftsmanship, Jones said, but also their value to educate and offer new perspectives on the world around us.

“It is a reward that recognizes excellence, but it’s excellence that helps us be better citizens,” Jones said.

Jones uses the example of HBO’s The Wire, a show that ran for five seasons in the 2000s and covered the failures of social institutions in Baltimore.

“What’s significant with a show like that is it’s an entertainment program. People have an emotional relationship with characters and they listen, follow, watch and begin to understand this situation over the course of a few years,” Jones said. “That’s very different from a journalist report on TV news in which you pay attention to a story for maybe four minutes and then it’s on to the next report or a commercial.”

In other words, the programs produced by Peabody winners encourage viewers to think more broadly and more in-depth about civic matters over a longer period of time.

This kind of recognition makes the Peabody Awards an anomaly in media scholarship, according to Jones.

“Scholars often have a critical eye on media. We talk about how media might increase violence in society or we look at how it may not serve democracy well,” he said. “The Peabody Awards are somewhat the opposite of that. We are highlighting media at their best; how media might help us be empathetic as well as more knowledgeable about our world and its myriad problems and challenges.”

As director of the awards program, Jones is primarily responsible for guiding the adjudication.

Over a three-month period, a 15-member board judges more than 1,000 entries and narrows them to 35 or so winners.

Winners are announced each March. After the announcement, the director facilitates the process of crafting the awards presentation show in New York in May. When the awards process is over each year, Jones said, the Peabody Awards should continue to foster discussion about current and past award winners.

In September, the Peabody Awards highlighted the work of the U.S. Supreme Court-centered blog and 2013 Peabody winner SCOTUSblog by hosting a forum covering topics touched by the groundbreaking website. That daylong forum featured notable experts on the Supreme Court and news media. The program aired on the cable network C-SPAN.

The Peabody Awards also are hosting a series this fall called Peabody Decades, which are screenings that highlight American cultural history through past Peabody winning and nonwinning submissions housed in the Peabody Archives.

That program takes advantage of a vast media collection started 72 years ago. The Peabody Awards house the third largest repository of radio, television and electronic media in the U.S.

These programs not only garner interest on campus from a variety of disciplines, Jones said, but they also can help build Peabody’s national reputation.

That reputation, he said, is important to UGA and the role it plays in housing the awards.

“The fact that the University of Georgia would be the one bestowing such a prestigious award on so few winners every year really calls attention that universities are places that recognize the best a society or civilization has to offer,” Jones said.