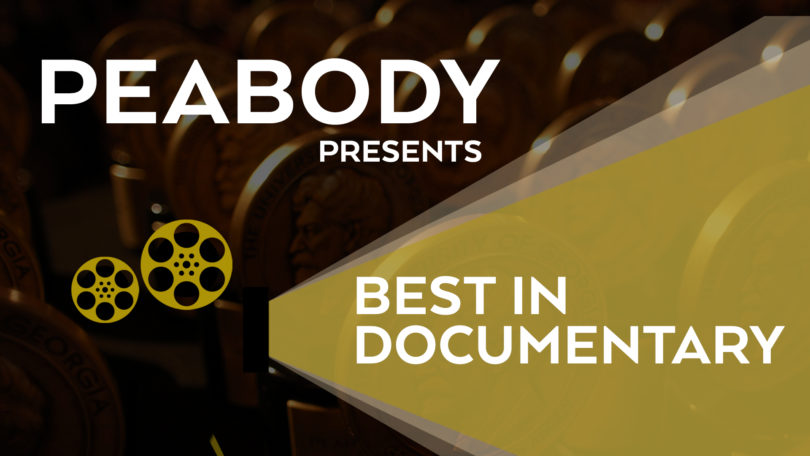 “Peabody Presents: Best in Documentary,” a 60-minute special will premiere on June 23 at 8:00 p.m. ET across PBS digital platforms.

The Peabody Awards has partnered with PBS for a roundtable special featuring the filmmakers of this year’s 10 Peabody documentary winners. The co-production, “Peabody Presents: Best in Documentary,” will celebrate the films while encouraging in-depth discussion around the social issues they address. Earlier this month, Peabody announced its 30 winners, a collection of stories that capture society’s most important issues.

Tabitha Jackson, director of the Sundance Film Festival, will moderate panels around social issues including African American Justice and Dignity; Scientific Frontiers; Authoritarianism and Threats to Democracy; and Families in Global Conflict Zones. Documentarians will discuss how their films address these issues, and clips from the winning programs will be used to provide further context.

The 60-minute special will premiere on June 23 at 8 p.m. ET across PBS digital platforms, including PBS’ primary YouTube channel and Facebook, as well as station-branded PBS platforms, including PBS.org and PBS Video App available on iOS, Android, Roku, Apple TV, Android TV, Amazon Fire TV, Samsung Smart TV and Chromecast. The Peabody Awards are based at the Grady College of Journalism and Mass Communication at the University of Georgia.

“The subjects of each of this year’s winners could not be more pressing and timely for both the American public and the media and entertainment industry to take up and examine,” said Jeffrey Jones, executive director of Peabody. “It is a privilege to hear such powerful voices and to give viewers a much closer look at the artistic vision bringing these stories to light.”

“Telling stories that help to elevate diverse perspectives and deepen understanding is at the core of PBS’ mission,” said Perry Simon, chief programming executive and general manager of general audience programming at PBS. “PBS is proud to partner with The Peabody Awards to help foster a public dialogue around the complex issues raised in these award-winning films that are both timely and relevant.”

RaMell Ross, INDEPENDENT LENS “Hale County This Morning, This Evening”
A brilliant articulation of place marked by the intimately beautiful yet quotidian dimensions of black lives in Alabama, the film is a welcome window into the spirit of African Americans far too rarely represented in film and media.

dream hampton, “Surviving R. Kelly”
This explosive six-part series, based on interviews with women who survived alleged sexual abuse from R&B superstar R. Kelly, chronicles the complicity of a music industry and fans who turned a blind eye to multiple allegations as the singer rose to staggering heights of fame. The result is a powerful exploration of celebrity, the double standard of justice around gender and race, and how speaking truth can effect change.

Trey Ellis, “True Justice: Bryan’s Stevenson’s Fight for Equality”
A profile of attorney Bryan Stevenson and his work at the Equal Justice Initiative seeking justice for the incarcerated poor and death row inmates in Alabama and the South, the film offers a searing indictment of the court system and helps viewers see how the U.S. Supreme Court is historically and directly accountable for sustaining racial violence, white supremacy and the exploitation of black people through the trajectory of decisions that leads from enslavement to lynching to the death penalty.

Todd Douglas Miller, “Apollo 11”
Comprised entirely and masterfully of archival materials, “Apollo 11” is a reminder of a time when America celebrated scientific accomplishment and engineers, test pilots, human “computers” and government agencies collaborated to pull off something that had never been done. With previously unreleased 70 mm film footage and audio files, reproduced here without talking heads or authoritative narration, this compelling documentary makes NASA’s first moon landing present and visceral for a new generation.

Laura Nix, POV “Inventing Tomorrow”
An inspiring profile of six amazing teenage scientists from around the world serves not only as a celebration of science, of knowledge and of sheer ingenuity, but as a celebration of young people working to solve the problems given to them by prior generations.

Authoritarianism and Threats to Democracy

Almudena Carracedo, Robert Bahar, POV “The Silence of Others”
A stunning reflection on fascism, memory and forgetting by documenting the struggle of victims seeking legal redress for torture and other human rights abuses committed during Spain’s Gen. Franco’s dictatorial reign. The film serves as a cautionary tale of fascism, its enduring wounds and enduring presence.

Petra Costa, “The Edge of Democracy”
Telling the epic tragedy of what happened in Brazil, from Lula to Bolsonaro, this film commandingly and chillingly shows how precarious a democracy can be.

Waad Al-Kateab, Edward Watts, FRONTLINE “For Sama”
In the painful and poetic testament that is “For Sama,” Waad Al-Kateab wrestles with why she and her husband remain in besieged Aleppo to help run a hospital, as the choice to flee is much more wrenching than one might imagine, and the choice to stay is equally confounding, yet understandable. We have all seen the war in Syria in countless news reports, but we have not seen it like this.

Hassan Fazili, POV “Midnight Traveler”
Filmed on phones, this autobiographical account of his refugee family’s journey from Afghanistan to Hungary is an arresting and deeply moving testament to the power of parenting through trauma. It offers a remarkably rare and valuable humanizing picture of the everyday life of a refugee family, while also stopping at points to consider the ethics of filming such a story.

Simon Lereng Wilmont, POV “The Distant Barking of Dogs”
This beautiful, moving and nuanced documentary chronicles life in a war zone through the eyes of a child. The story of an Eastern Ukrainian boy and his fiercely devoted grandmother pits the harsh realities of war against the innocence of childhood in a gracefully edited collection of cinéma vérité moments.

The Peabody Awards honor the most powerful, enlightening and invigorating stories in television, radio and digital media. Each year, Peabody Awards are bestowed upon a curated collection of 30 stories that capture society’s most important issues—known as the Peabody 30. Honorees must be unanimously chosen by the Peabody Board of Jurors, a diverse assembly of industry professionals, media scholars, critics and journalists who each bring a unique perspective of what constitutes a story that matters. From major Hollywood productions to local journalism, the network of Peabody Awards winners is a definitive collection of society’s most important stories and storytellers, including winners that have ranged from Edward R. Murrow, Carol Burnett, and David Letterman to “The Sopranos,” “Sesame Street,” “Breaking Bad,” and “Serial.” The Peabody Awards were founded in 1940 at the Grady College of Journalism and Mass Communication at the University of Georgia and are still based in Athens today. For more information, visit peabodyawards.com.