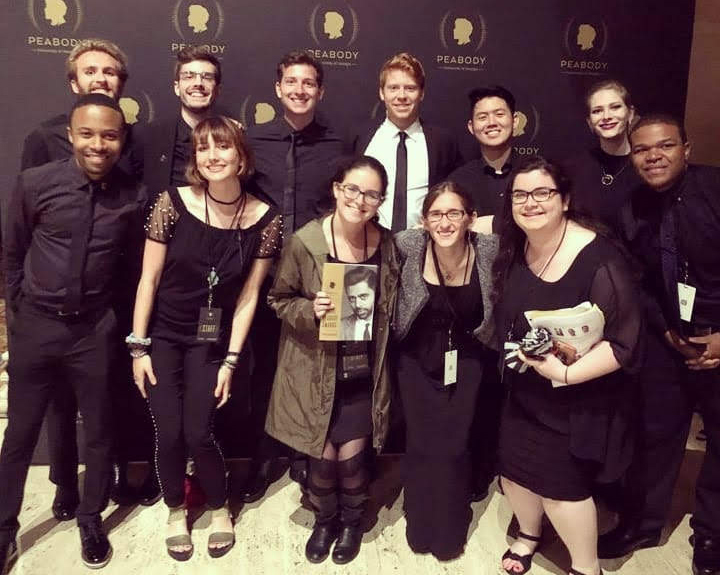 Members of 2018's Peabody Student Honor Board at the awards ceremony.

Each year, University of Georgia students get to be judges for one of the world’s most coveted media awards.

They’re members of the Peabody Student Honor Board, a semesterlong class that includes nominating and judging the Futures of Media Award as well as a trip to the Peabody Awards ceremony in New York City in May.

The group studies six innovative media: virtual reality, video games, webisodes, mobile media, interactive documentary and digital journalism. Students are tasked with finding the best examples of each medium and presenting them to the class, making a case for why their chosen pieces should be in the running for a Peabody.

“There are multiple demands on media workers today to be able to tell stories across platforms, to do stuff that’s innovative and compelling,” said Jeffery Jones, executive director of the Peabody Awards and Lambdin Kay professor of entertainment and media studies who teaches the class.

“This is a comparative media class. You’ll hear students say ‘this video game would work better as a virtual reality piece,’” Jones said, explaining how the experience of comparing different media makes for a richer student that’s more prepared for the workforce.

The group chooses winners for each category and heads to New York City to present the awards and work as production assistants at the Peabody Awards ceremony, an invaluable experience for those hoping to land a job in media.

“We get great exposure at the ceremony. It’s a major networking event,” said Ben Goren, a fourth-year entertainment and media studies major. “The winners don’t look at us as students but as judges.”

The students brush shoulders with the hottest names in media while escorting them to interviews and to the stage after a win.

“At the after party last year, Amy Sherman-Palladino—a writer and producer for ‘The Marvelous Mrs. Maisel’ and ‘Gilmore Girls’—was just hanging out, and I talked to her for like 20 minutes. She was the most approachable person,” said Jaime Conlan, a third-year majoring in entertainment and media studies and Spanish. “From people just starting out that are super humble to big names in the industry, it’s huge to be able to interact with them in any capacity.”

But these experiences don’t just provide a cool story for students to share with their peers when they come back from the ceremony. It’s a chance to get a leg up when entering the competitive world of media.

“These students help produce the ceremony, but they also work with the Los Angeles-based production company that has produced our television show for the last five years,” Jones said. “Anyone who wants to work in the television industry has to work their way up. The fact that these students have actually already worked with a production company at that ground level is significant. It’s fantastic for the students.”