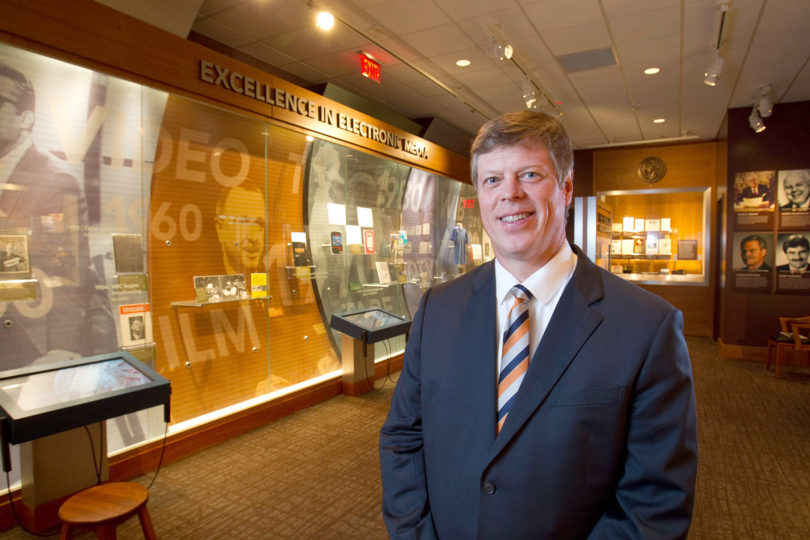 A revolutionary chef with a passion for French cuisine. A seasoned journalist trusted by Americans to bring the news of the day into their homes each evening. Families of all shapes, colors and sizes. Comedians, artists and activists.

The common thread linking these may not be immediately evident, but dig a little deeper and there’s a connection: All are in the elite club of recipients of a George Foster Peabody Award.

Perusing the list of winners reveals a who’s who of media and culture—from Julia Child to Walter Cronkite, All in the Family to The Simpsons, Carol Burnett to Oprah Winfrey, Steven Spielberg and Spike Lee.

Since its founding 75 years ago, the Peabodys have been issued under the auspices of UGA’s Grady College of Journalism and Mass Communication. What originated as a desire to acknowledge the best in radio has become an award that reflects compelling storytelling across all forms of electronic media. The carefully curated awards support the university’s stature as a pre-eminent institution of learning, often serving as catalysts for change across the globe.

In his third year as executive director of the Peabodys, Jeffrey Jones is committed to bringing the awards program into an expanded media landscape while maintaining its core credential: to recognize excellence in storytelling.

“We feel that if the story matters to us as citizens, then it will receive a Peabody Award,” said Jones, who also holds the Lambdin Kay Chair for the Peabodys. “For us, it’s to recognize that media can be an important voice, and shape who and what we are, if we pay attention to the best that media have to offer.”

During his tenure, the awards program has undergone several changes. The entry process was streamlined to receive digital submissions. Initial screening committees now include media experts from across the country, broadening the university’s outreach and invigorating the awards selection process.

Jones also created a formal advisory board of 25 upper-level media and entertainment industry executives, including CEOs, television and radio programming heads, entertainment lawyers, talent agents and others, who serve as consultants offering their assistance in furthering the interests and increasing the prominence of the awards.

He also struck a deal with the television network Pivot, part of Participant Media, to carry the awards ceremony, reimagined from a midday lunch to an evening event replete with a red-carpet walk. Last year’s gala at Cipriani Wall Street included guest presenters like Tina Fey and Charlie Rose, with Fred Armisen as emcee.

The changes are a necessary reflection of the times as well as a way to call attention to the worth of the Peabodys, according to Jones.

‘A diamond in the rough’
The status of the awards is only part of the story. As the clearinghouse for entries since the awards began, UGA has amassed the third-largest media archive in the country, behind the Library of Congress and the University of Southern California-Los Angeles.

For years, much of the archives languished in storage due to a lack of exhibit space on campus. When the university’s Richard B. Russell Building Special Collections Libraries opened in 2012, it included a permanent gallery for the Peabody Collection.

Ruta Abolins, director of the Brown Media Archives and Peabody Awards Collection, credits the building with raising the profile of the archives and its importance as a cultural touchstone.

“I don’t know any place where you can get a slice of media history like this,” she said. “The real benefit is looking at an entire year of programming-—it shows the real flavor of the year in the U.S. and abroad and what was important.”

The archives are also a record of technology and how media have changed over the years, with the Peabodys highlighting innovative programming or delivery methods long before they reach the public consciousness.

To raise awareness about the “tremendous reservoir” housed in the Peabody Collection, Jones and his team have hosted the first of two academic conferences that focus on the scholarly potential of the archives. The results will be preserved in the inaugural volume of a book series dedicated to the Peabody Archives and produced by the University of Georgia Press.

“It’s a way to recognize that this is a treasure trove we’ve not fully mined,” he said.