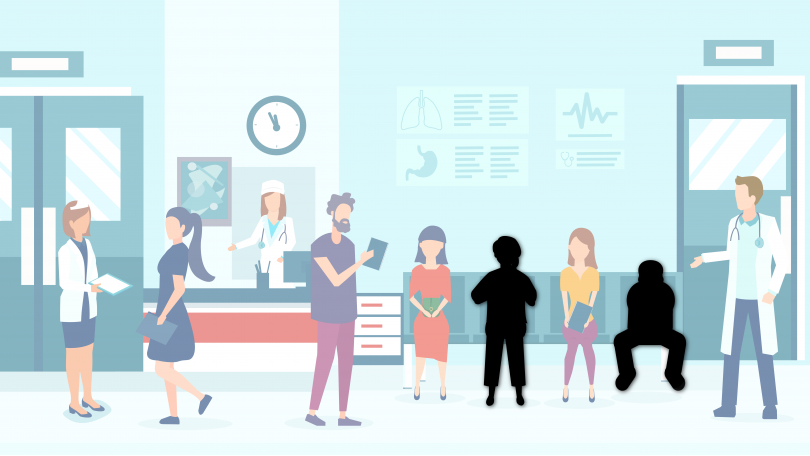 New research from the University of Georgia shows biases in emergency triage protocols during the COVID-19 pandemic. (Illustration by Lindsay Robinson)

When COVID-19 patients began filling up ICUs throughout the country in 2020, health care providers faced difficult decisions. Health care workers had to decide which patients were most likely to recover with care and which were not so resources could be prioritized.

But a new paper from the University of Georgia suggests that unconscious biases in the health care system may have influenced how individuals with intellectual disabilities were categorized in emergency triage protocols.

The state-level protocols, while crucial for prioritizing care during disasters, frequently allocated resources to able-bodied patients over ones with disabilities, the researchers found.

The study, published in Disaster Medicine and Public Health Preparedness, found that some states had emergency protocols saying that individuals with brain injuries, cognitive disorders or other intellectual disabilities may be poor candidates for ventilator support. Others had vague guidelines that instructed providers to focus resources on patients who are most likely to survive. Adults with disabilities are significantly more likely to have comorbidities, such as heart disease and diabetes. In the case of COVID-19, those conditions were considered risk factors for poor outcomes, relegating these patients to the bottom of care hierarchy.

Ableism, which is when people discriminate against those with disabilities and favor people with able bodies, is just so ingrained into the health care system.” —Brooke Felt, Master of Social Work and Master of Public Health graduate

To compound the problem, COVID-19 hospital protocols that banned visitors often shut out advocates and family members who might have been able to advocate for these individuals. For patients unable to communicate their needs, the situation could easily turn deadly.

“I think when you leave people out of the conversations making these decisions, you see an issue like structural discrimination and bias,” said Brooke Felt, lead author of the paper who graduated from UGA in 2020 with Master of Social Work and Master of Public Health degrees.

“Ableism, which is when people discriminate against those with disabilities and favor people with able bodies, is just so ingrained into the health care system. It is definitely a bias that a lot of people have, and sometimes people don’t even recognize it.”

Triaging, or prioritizing care and resources during emergencies or disasters, can be a subjective process. State protocols offer a degree of guidance about how to allocate resources, but in the moment, decisions about care often come down to individual health care providers.

In the case of the COVID-19 pandemic, hospitals were overwhelmed with patients and frequently had to make these judgment calls without extensive medical histories or patient advocates.

I do not believe clinicians are deliberately doing this … This is more of an educational opportunity for clinicians to recognize that an issue exists and begin to make systemic changes, so we do not repeat the same mistakes in the future.” — Curt Harris, director of the Institute for Disaster Management

Curt Harris, corresponding author of the paper and director of the Institute for Disaster Management in UGA’s College of Public Health, stressed that this research isn’t an attack on clinical providers, who have shouldered an enormous burden throughout the pandemic.

“I do not believe clinicians are deliberately doing this,” he said. “I just don’t think they have been given the requisite education needed for population-level health issues nor is it easy for clinicians to reconcile what constitutes high quality of life for patients with intellectual disabilities. This is more of an educational opportunity for clinicians to recognize that an issue exists and begin to make systemic changes, so we do not repeat the same mistakes in the future.”

At the center of these emergency protocols is the underlying implication that an able-bodied person is more worthy of life-saving treatments than one who is intellectually disabled, Felt said.

One way to address this oversight would be to integrate social workers into the emergency response process, the authors said. They can act as advocates for those who can’t speak on their own behalf.

“Involving social workers means you may be more likely to have someone who recognizes the structural inequalities, biases and discrimination and can bring those issues more into focus so they can be addressed,” said Felt.

Altering pre-medical and medical education curricula to incorporate training on how to work with individuals with disabilities—something that often isn’t covered—could also go a long way in closing the gap in care.

Felt had asked a friend in a medical program about bias and discrimination trainings in his coursework. She was shocked to learn his clinical education did not cover this topic.

“I feel like that should be a foundational class,” she said. “That’s something that definitely needs to change.”