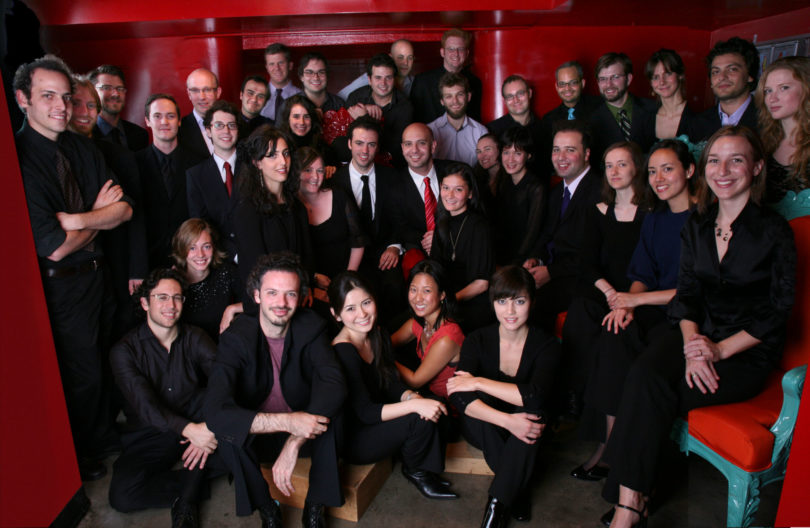 Athens, Ga. – The University of Georgia Performing Arts Center will present The Knights, one of the nation’s newest chamber orchestras, on April 16 at 8 p.m. in Hodgson Concert Hall. Based in New York, The Knights is a fellowship of adventurous musicians who are expanding the orchestral concert experience with diverse programming, innovative formats and a unique atmosphere of camaraderie.

Just five years old, the 40-member orchestra has quickly made a name for itself, performing critically acclaimed concerts in settings as diverse as Carnegie Hall and Le Poisson Rouge, the multimedia art cabaret in Greenwich Village.

The New Yorker magazine said, “Few ensembles are as adept at mixing old music with new as the dynamic young Brooklyn orchestra;” and the Los Angeles Times wrote, “If we are to talk about the future of classical music in America, sooner or later The Knights will come up.”

Led by conductor Eric Jacobsen, the orchestra has performed with many of the world’s leading soloists, including Yo-Yo Ma, who called his experience with The Knights “vibrant” and “energetic.”

The members of The Knights are graduates of the Juilliard, Curtis, Manhattan, Mannes and Eastman music schools. As soloists, the members have performed with the New York Philharmonic, the Chicago Symphony Orchestra, the San Francisco Symphony, the Israel Philharmonic and Lincoln Center’s Mostly Mozart Orchestra. Many members of The Knights also enjoy successful careers as composers, arrangers and singer-songwriters, bringing a range of cultural influences to the ensemble from jazz, pop and indie rock music.

The concert will be recorded for broadcast on American Public Media’s Performance Today, heard by more than 1.3 million listeners across the country.

The underwriters for this performance are Lawrence and Mary Hepburn.