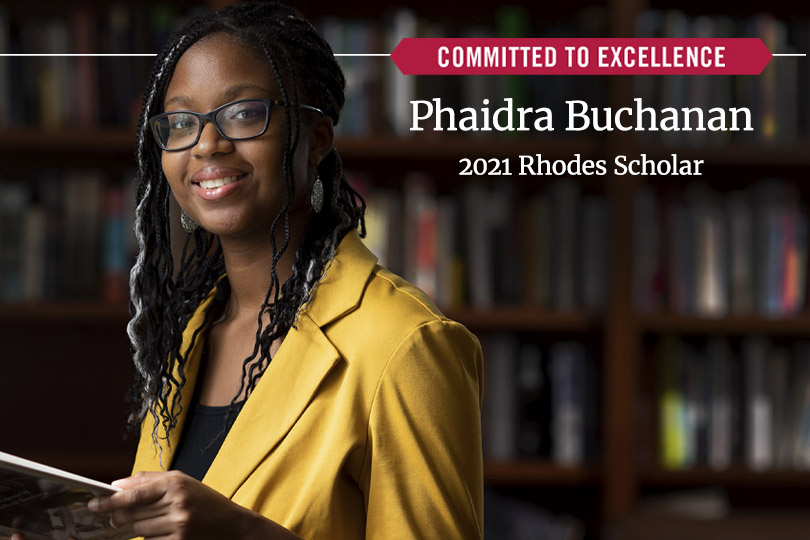 University of Georgia student Phaidra Buchanan joined recipients from 64 countries around the world this weekend as she was named a 2021 Rhodes Scholar, bringing the total number of UGA Rhodes Scholars to 25.

The Rhodes Scholarship is the oldest and most celebrated international fellowship award in the world. The 2021 scholars will begin their various courses of study at the University of Oxford in October. Buchanan is an Honors student at UGA.

“The University of Georgia is very proud of our newest Rhodes Scholar,” said President Jere W. Morehead. “Phaidra has amassed an impressive record of academic achievement, engagement and leadership already as a UGA student, and we look forward to the positive impact she will continue to make on the world as she pursues her education and career path.”

Buchanan, a Foundation Fellow and senior from Tyrone, is majoring in social studies education in the Mary Frances Early College of Education and minoring in German.

“Phaidra Buchanan is now part of a distinguished legacy of Rhodes Scholars who studied at the University of Georgia,” said Senior Vice President for Academic Affairs and Provost S. Jack Hu. “In addition to congratulating her, I also want to thank the faculty and staff in the Honors Program and across campus who supported Phaidra and helped make her success possible.”

Buchanan plans to generate policy that promotes equitable funding, school desegregation and culturally responsive curricula, pedagogy and assessments. Her goal is to work as a secondary social studies teacher for five years at a minimum to supplement her theoretical knowledge with practical experience.

As an undergraduate pre-service teacher, she investigated structural inequities in the American educational system and their historical roots, and how teachers, teacher educators and educational theorists have sought to combat them. She is currently working on two separate research projects—the first helps facilitate workshops designed to develop pre-service teachers’ cultural awareness, and the second involves investigating the history of slavery at UGA. In 2019, she completed an inquiry into the history and current state of school segregation in Fayette County, the school district where she completed her primary and secondary education.

Buchanan is a volunteer with U-Lead Athens, a tutor for the Athens Anti-Discrimination Movement Tutoring Service and an assistant and panel moderator for the Morehouse College Annual Math Competitions Bootcamp. She was a student assistant in the history department, on the Meigs Professorship Selection Committee, on UGA’s First Look Academic Panel and in the LEAD Fellows Program. Through the Honors Team-Based Problem-Solving Course, she also worked with Envision Athens and its partner organization MOB Athens.

A UGA Presidential Scholar and recipient of the Melanie A. Burden Community Arts Award, Buchanan studied abroad in Ghana, Germany and England.

Other recent UGA Rhodes Scholars include Laura Courchesne in 2017, Elizabeth Allan in 2013, Tracy Yang in 2011, and Deep Shah and Kate Vyborny in 2008. Among public universities, the University of Georgia has been one of the nation’s top three producers of Rhodes Scholars over the past 25 years.