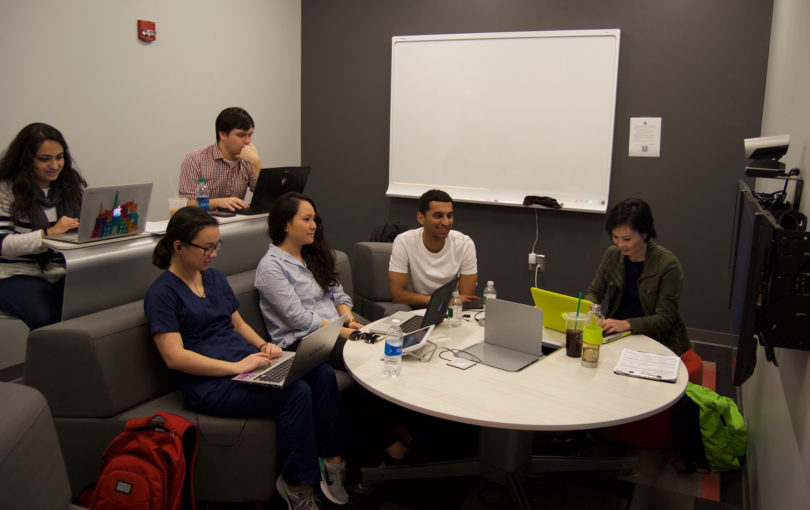 College of Pharmacy students in Augusta study in one of the small group rooms in the new facility.

Augusta, Ga. – For the first time in its more than 40-year history, the University of Georgia College of Pharmacy’s program in Augusta has its own facility.

Located on the Augusta University Health Sciences campus, the new facility offers a 50-seat classroom, eight small group learning spaces that feature video connectivity to other UGA College of Pharmacy campuses across the state, a collaboration lounge, faculty and administrative offices and a full-service kitchen and break area.

Prior to this new site, the program was housed in rented and shared buildings.

“With this new site, we’ve more than doubled the educational space for our expanded course offerings in Augusta,” said Susan Fagan, the Albert W. Jowdy Distinguished Research Professor and the college’s interim director of interprofessional education. “In addition, classroom and small group areas feature state-of-the-art technology and connectivity, allowing us to provide a truly superior academic experience for our professional pharmacy and graduate students.”

The college obtained approval from the Board of Regents of the University System of Georgia and a long-term ground lease from Augusta University in 2015, and the $3.2 million demolition and renovation of the former dialysis clinic began in January 2016.

Open house festivities were held in late January, where Fagan told the more than 100 guests and attendees that inspiration for the design of the facility came from collaborative efforts with building and design experts, faculty members and students enrolled in the program.

Designs for the project were developed by May Architecture + Interiors of Atlanta; construction of the facility was completed by the Augusta office of Christman Construction Inc.; and Ben Liverman from UGA’s Office of University Architects was the project manager.

A second phase of the Augusta expansion is planned for the near future and will support the college’s Program in Clinical and Experimental Therapeutics, which aims to identify new treatments for diseases, such as cancer, stroke, dementia and heart disease. New laboratory space will also support the planned expansion of the master’s in pharmacy programs on the Augusta campus.

Other campuses of the UGA College of Pharmacy include the main campus in Athens, Savannah, Albany, and a pharmaceutical regulatory affairs program in Gwinnett.