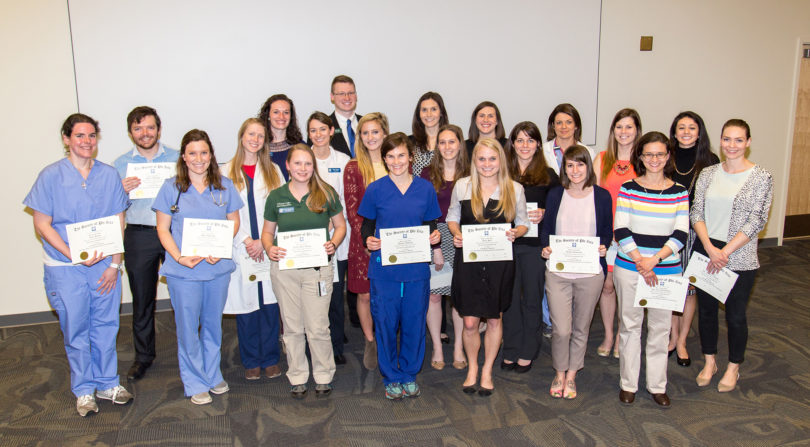 The Zoetis Award for Excellence in Research was presented to M. Stephen Trent, the UGA Foundation Distinguished Professor of Infectious Diseases, whose research focuses on the study of lipopolysaccharide biosynthesis in bacteria and, more specifically, on lipid A’s role in gram-negative bacteria and its potential as a therapeutic agent. Nominators praised his contributions toward greater understanding of the mechanisms that regulate gram-negative bacteria and of the biology of other emerging bacterial pathogens. Also mentioned was his robust research program-he currently has five active grants totaling more than $5.3 million in funding from the National Institutes of Health-and his ability to make significant contributions toward vaccine and other therapeutic development.

The Clinical Research Award was presented to Corey Saba, an assistant professor of oncology, in recognition for her clinical research program and the expansion of treatment options available to UGA Veterinary Teaching Hospital oncology patients through her efforts. During the last decade, Saba has led multiple clinical trials to evaluate the effectiveness of TANOVEA in treating dogs with lymphoma; the data obtained from the trials is currently being used to pursue U.S. Food and Drug Administration approval of this drug for dogs with lymphoma. In addition, UGA will be the lead trial site for evaluating the drug for use in cats with lymphoma. She has also worked to expand UGA’s participation in the National Cancer Institute’s Clinical Oncology Trials Consortium and has developed research collaborations with pharmaceutical companies investigating novel immunotherapies. Her efforts have helped to increase the Oncology Service’s caseload and enhance the level of treatment options available to the service’s patients.

The John M. Bowen Award for Excellence in Animal/Biomedical Research was awarded to Melinda Brindley, an assistant professor of virology who is jointly appointed to the departments of population health and infectious diseases. Brindley was recognized for her contributions toward the advancement of microbiology, collaborations with other researchers within the college and her track record in writing successful grants and having studies published in prestigious scientific journals.

The Outstanding Laboratory Service Award was presented to Bridget Garner, an associate professor of clinical pathology, for her role in leading the team that planned and orchestrated the Clinical Pathology Laboratory’s move to the new UGA Veterinary Medical Center, which opened in March 2015. The lab supports the UGA Veterinary Teaching Hospital and the Athens Veterinary Diagnostic Laboratory. The committee’s work included working out the details of the final construction of the new laboratory, planning the move with minimal disruption of services and procuring and deploying new equipment. Despite the extra work, nominators noted Garner still carried a full teaching load, published six papers in peer-reviewed journals and had a heavy service load for her lab work during 21 weeks of service duty.

The Outstanding Hospital Service Award was presented to Kate Myrna, assistant professor of ophthalmology, for her dedication to patients, referring veterinarians, students and colleagues. The Ophthalmology Service at the UGA Veterinary Teaching Hospital serves both large and small animals. For 14 months, Myrna single-handedly ran this service while managing to increase its already high caseload. And, she also became a mentor to a master’s student, taught all ophthalmology courses and labs in the pre-clinical curriculum, won two teaching awards, published three studies and submitted an additional four research papers for publication. She made time to improve her service’s relationships with both small- and large-animal veterinarians within the teaching hospital and with referring equine veterinarians. She improved both her service’s reputation and the quality of care it provides-as evidenced by it consistently receiving the highest level of client survey responses, which were overwhelmingly positive.

The Dennis Sikes Scholarship in Experimental Pathology was awarded to Stivalis Cardenas Garcia, a Ph.D. candidate in pathology who has focused her research on novel vaccination strategies for Newcastle disease, which impacts birds, particularly poultry, worldwide. This award is presented to a pathology graduate student who excels in research of disease processes. It is given in memory of Sikes, a research professor and veterinarian biologist at UGA who was the first Georgian to receive the Royal Society Award. He was a consultant pathologist for the Atomic Energy Commission.

The David Tyler Award for Advances in Teaching was awarded to Erik H. Hofmeister, an associate professor of anesthesiology and chief of small animal surgery and anesthesia at the UGA Veterinary Teaching Hospital. Nominators praised Hofmeister for his enthusiasm in exploring new avenues of teaching, including teaching courses to introduce undergraduates to research and scientific principles and designing an academic rotation course for fourth-year veterinary students interested in the various aspects of being an academic veterinarian.

William Clark and Tessa Sghiatti, both from the Class of 2018, received the Outstanding Sophomore Student Awards for having the highest cumulative grade point average and outstanding professionalism in the second-year class. As part of their award, they will serve as co-vice presidents on the Phi Zeta board for one year.

Four students, who were nominated by their peers, received the R. Bruce Hollett Student Leadership, Service and Outreach Awards: Joshua “Jed” Darden, Class of 2016; Yari Torres, Class of 2017; Scott Foster, Class of 2018; and Trey Callahan, Class of 2019. The award recognizes students for their leadership, service and outreach.

The seven residents/graduate students inducted were Desiree Rosselli, Nicola Volstad, Brett Gulledge and Jamie Brown all residents in small animal soft-tissue surgery; Vanna Dickerson, a master’s degree student in veterinary and biomedical sciences; Carmen Jerry, who is enrolled in the combined residency/Ph.D. program in anatomic pathology with a poultry emphasis; and Corry Yeuroukis, a resident in clinical pathology.

Amanda Erickson Coleman, an assistant professor of cardiology, was also inducted into Phi Zeta. Steven D. Holladay, department head for veterinary biosciences and diagnostic imaging and a professor of anatomy and toxicology, was inducted as an honorary member of Phi Zeta.

The awards were presented at the college’s annual Phi Zeta awards ceremony. The Phi Zeta Veterinary Honor Society was formally established in 1925 at Cornell University for the advancement of the veterinary profession, for higher educational requirements and for high scholarship. Phi Zeta recognizes and promotes scholarship and research in matters pertaining to the welfare and diseases of animals.

There are 27 chapters of Phi Zeta throughout the United States. The Xi chapter of Phi Zeta was established in 1959 at the University of Georgia.