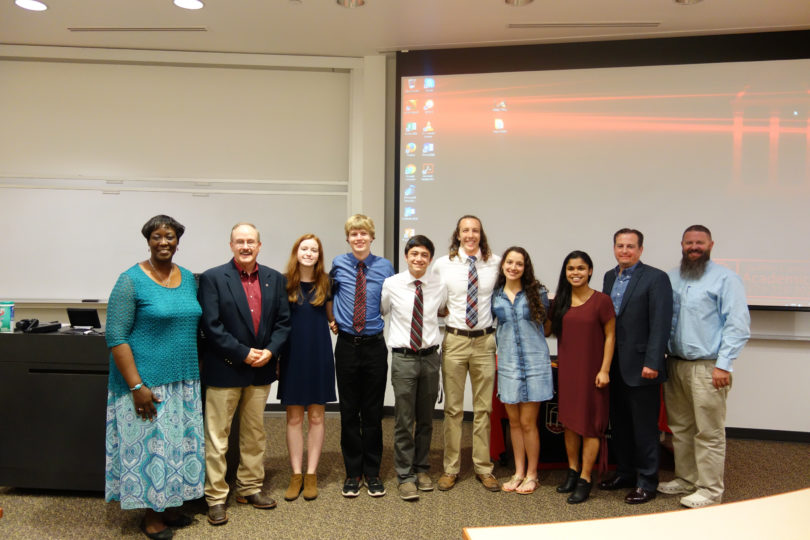 It is not often that high school students get to work with world-renowned research scientists before they enter college. However, for six seniors from Pike County High School, that is exactly what happened during the 2017-2018 school year.

The students are the second class of Pike County High School’s STEM Academy to complete the STEM Internship Program on the University of Georgia Griffin campus. To be eligible to apply for the program, students must be enrolled in the Pike County STEM Academy in their junior year and have a minimum GPA of 3.7.

Through the program, the students worked alongside UGA research scientists to become better prepared for post-secondary education and future careers in STEM fields.

“The UGA Griffin and Pike County STEM Academy partnership allows student interns to gain experiences in research and lab techniques that are not available in a high school setting,” said James Stanford, assistant principal for Pike County High School. “This opportunity is remarkable because high school students are able to intern at the Griffin campus working on authentic research with professors who are experts and leaders in their fields.”

The interns agree with Stanford’s sentiments, and all of them noted during their project presentations how grateful they were to have the chance to work with such renowned scientists. Each student gave a presentation on their experience April 12 at the End of Program Celebration at UGA’s Griffin campus.

Fancher and Ware assisted Tallury on “National Peanut Collection Maintenance and Characterization.” Fancher said she was amazed at the amount of experience she was able to gain as a high school student. She spent most of her time working in the lab using state-of-the-art equipment while working on the project. While touring the UGA main campus in Athens, Fancher spoke with a college junior who is just getting to use the equipment Fancher and Ware used during their STEM internship.

“It was amazing that she had just used the gel electrophoresis system as a junior in college and here we are using it as seniors in high school,” said Fancher.

Dodson and Tomko interned with Kealey and the FoodPIC team during the second semester. Their project, “Product Development of Low Cost Cattleman’s Carolina Tangy Gold Barbeque Sauce,” gave them the chance to not only work in the lab, but also gain hands-on experience working with the client.

The pair was charged with recreating the barbeque sauce for a restaurant that uses it as a base for its wing sauce. The client wanted to determine if it would be more cost efficient to make the barbeque sauce recipe from scratch as opposed to purchasing the Cattleman’s brand. Dodson and Tomko toiled away in the kitchen until they had a near exact recipe and ultimately did find it would be more economical for the client to make the sauce rather than purchase it. During their presentation, both said how much they enjoyed the internship and appreciated the chance to be a part of every step of the process.

Watts and Patel both worked with horticulturist Itle during the second semester on her blueberry research. Watts’ project was the “Analysis of Flavor Volatiles in Southern Highbush and Rabbiteye Blueberry Type” while Patel’s was the “Comparison of Seed Traits in Blueberry Cultivars Treated with Rescue Treatments.”

During her presentation, Patel said she learned a lot about Georgia-grown blueberries and the state’s blueberry industry through the internship.

“I have now learned just how important blueberries are to Georgia’s economy,” she said, describing her experience as “eye-opening.”

Exposing young people to different scientific fields and industries is a large part of why Stanford is glad his students have the chance participate in the program.

“Interns gain insight on the importance of scientific inquiry and witness firsthand how the research taking place at UGA Griffin impacts the world,” he said. “We are so fortunate to have UGA Griffin as a partner. The support and resources provided by faculty mentors and the university is amazing.”