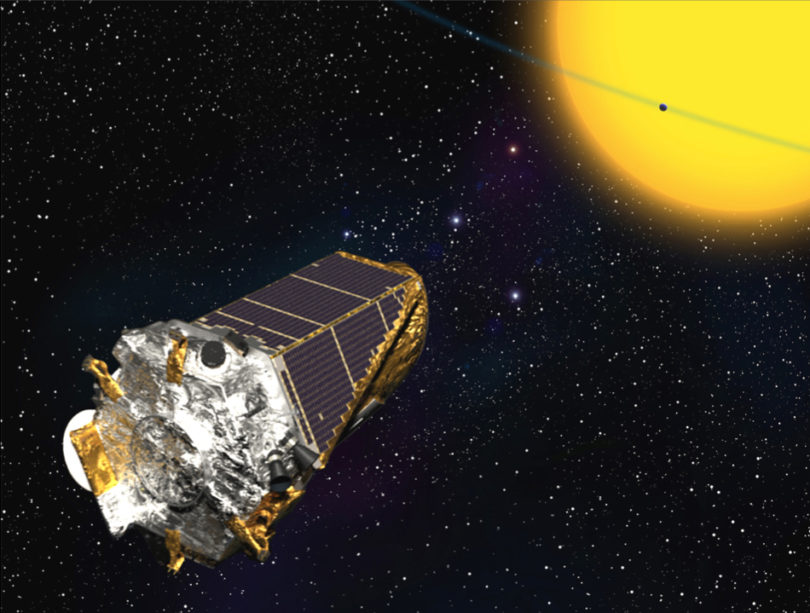 Above is an illustration of UGA-1785

Athens, Ga. – The nation’s first state-chartered university recently became the world’s first to have a star system named after it.

The University of Georgia and its Franklin College of Arts and Sciences received the honor after the Kepler mission, NASA’s first mission capable of finding earth-size planets, confirmed in 2012 the existence of three new planets in the system known as Kepler-37. This year, NASA authorized the nickname designation of this planetary system as UGA-1785.

The announcement was made in a letter from NASA Ames Research Center Director S. Pete Worden to Franklin College Dean Alan T. Dorsey in March 2013. Roger C. Hunter, a Franklin College alumnus, presented the letter to Dorsey during a recent visit to campus.

“It’s a wonderful gesture on the part of NASA and a humbling tribute to the history of UGA,” Dorsey said. “We are grateful to NASA, to the Kepler mission and to Roger Hunter for this unique honor.”

Hunter became program manager for the Kepler mission when it went into operation in 2008. He began looking for ways to connect the mission with the public imagination and honor his alma mater. NASA first approved the naming of one other planet, Kepler 16-B, for Tatooine, a fictional planet from the Star Wars film series that was the home of Luke Skywalker, before naming UGA-1785.

When the Kepler-37 system was confirmed in 2012, Hunter noticed from reports that the innermost planet in the system was the smallest ever detected with the Kepler space observatory. Measurements indicated its distance to be 211 light years away from the Earth and about the size of our moon.

“Knowing my UGA history, I knew that the light from this star began its journey toward the Kepler telescope in 1801, the same year that the Franklin College was founded and that classes began at UGA,” Hunter said, explaining the origins of UGA-1785.

Hunter presented Dorsey with a poster of the system with a color photograph of the star as it would appear above our atmosphere, along with coordinates of the system. Looking through the Cygnus Constellation, the Kepler field of view is visible over Athens from March through late October each year. Coordinates for UGA-1785 are right ascension 18 56 03.732 hours and declination +44 33 13.84 degrees (J2000).

“I think the best science is when people take ownership of a mission and feel some sort of kindred spirit with it,” Hunter said. “It’s gratifying to know that the Bulldog nation now extends into interstellar space.”