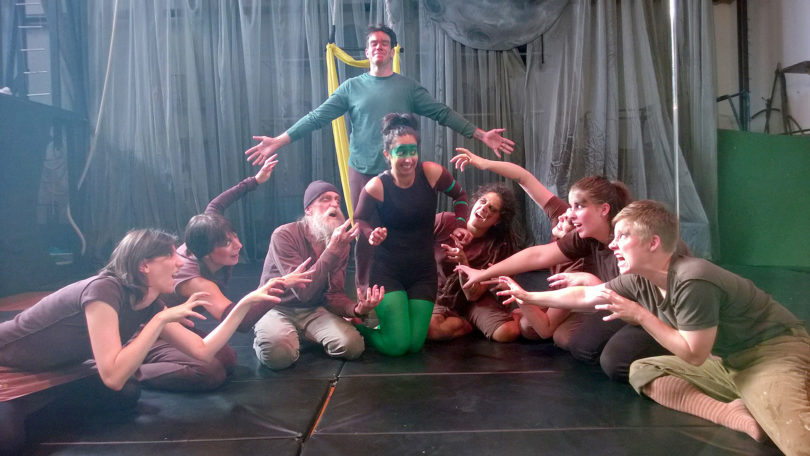 Athens, Ga. – University of Georgia doctoral student Uma Nagendra flipped and twisted her way to the top prize in the seventh annual Dance Your Ph.D. contest for her video explaining biology research through an aerial dance performance.

The contest, sponsored by Science Magazine, the Association of the Advancement of Science and HighWire Press, challenged scientists around the world to explain their Ph.D. research through the art form of dance. Nagendra’s video was chosen from 12 finalists as the overall winner by an expert panel of scientists and artists. Her video also won first place in the biology category.

Nagendra, a student in the Franklin College of Arts and Sciences department of plant biology, studies how forests regenerate after severe disturbances like tornadoes.

In 2005, Nagendra’s home city of New Orleans was devastated by Hurricane Katrina. This piqued her interest in studying how the natural world recovers from disasters. Nagendra began her doctorate at UGA in 2011 and set out to research tornadoes, a more readily occurring disaster.

Nagendra attended the New Orleans Center for Creative Arts part time as a high school student but later shifted her attention to science as an undergraduate at Swarthmore College.

“From the moment I first saw a Dance Your Ph.D. video, I knew I would enter the contest someday,” she said. “I really think that art can help communicate scientific ideas and fuel creative thinking.”

As an avid aerial dance enthusiast, she takes classes regularly at Athens-based Canopy Studio. When she decided to enter the contest, she enlisted the help of her classmates and graduate students.

“I have the good fortune to be a part of both a creative trapeze community and an amazing group of graduate students,” Nagendra said. “When I brought up the idea, my trapeze class was eager to participate in such an unusual project. I think we were all eager to be a part of the first aerial Dance Your Ph.D. And there were a surprising number of graduate students and friends who responded enthusiastically to my casting call to ‘roll around on the floor and unleash your inner soil pathogen.’ It’s a great break from pipetting, or weighing samples.”

Aerial dance has been a tool in her own success as a graduate student, as well as many other UGA scientists.

“I like that it helps me use a different part of my brain after a long day of looking at data. It’s a different way of challenging yourself, both creatively and physically,” she said. “A friend of mine in college first introduced me to aerial arts, and I was glad to find out that Athens has its own unique and wonderful aerial studio—where many scientists take dance classes, actually. One of my first trapeze instructors is a researcher in the genetics department, and several former graduate students in my program did trapeze and silks at Canopy for many years.”

For winning the biology category and the overall prize, Nagendra will receive $1,000 and a free trip to Stanford University where her video will be screened at the annual scholarly publishing meeting organized by HighWire press.

To view today’s announcement of the contest winner, see http://news.sciencemag.org/scientific-community/2014/10/dance-your-phd-winner.