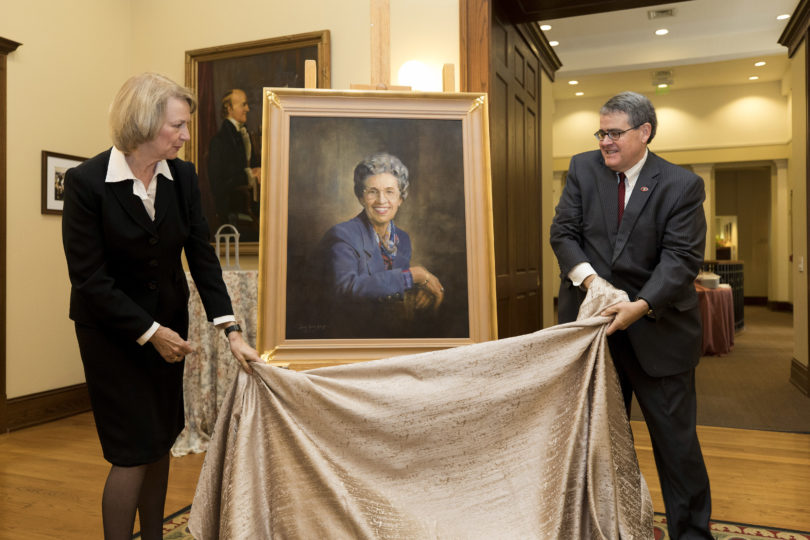 The University of Georgia celebrated the lifetime achievements of Dr. Louise McBee by unveiling her portrait in the Administration Building at a ceremony on Nov. 28 at 11 a.m., UGA President Jere W. Morehead announced. McBee held leadership positions for more than 25 years at the University of Georgia before serving for more than a decade as a champion for higher education in the Georgia State House.

“Dr. McBee’s extraordinary legacy at UGA is one that will endure for many years to come,” said Morehead. “She helped to guide the university community in a thoughtful and nurturing manner. She later served the Athens community as a highly effective state legislator. Her many contributions to this institution and to higher education make her deserving of this special recognition.”

McBee came to UGA in the early 1960s and served for four years as the dean of women, a position that was later broadened and renamed the associate dean of student affairs. It was not common for women to be in senior leadership positions during that era, but McBee thrived and was widely admired.

She went on to hold several other positions at UGA, including dean of student affairs, a job that placed her in an elite group of female administrators in higher education. At the time, she was one of four women in the United States holding top jobs in student personnel in schools with more than 10,000 students.

In 1987, McBee was appointed interim vice president for academic affairs, becoming the university’s second-highest ranking official. She served in the position for a year before retiring in 1988.

McBee was elected to the Georgia House of Representatives in 1991 and served for 14 years, using her experiences at UGA to help set state policy in higher education. Among her many accomplishments in office, McBee was key to establishing the successful Governor’s Teaching Fellows Program. She also devoted herself to a bill that allowed teachers to count their unused sick leave as service creditable toward retirement.

This year marks the 30th anniversary of the Louise McBee Lectureship in Higher Education, which was created in her honor and is one of the few annual lecture series in the United States that focuses solely on higher education. Founded by the UGA Institute of Higher Education in 1989, the series has brought numerous persons of great distinction to IHE and the University of Georgia to comment upon current directions and themes in higher education.