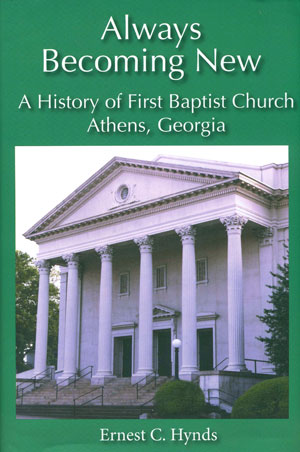 Always Becoming New is the theme and title of a history of the First Baptist Church in downtown Athens. The 520-page book was written by Ernest C. Hynds, emeritus professor of -journalism.

The book contains information about the university—with the church’s first building in 1830 located on land provided by the university between what is now the Holmes-Hunter Academic Building and Lumpkin Street. The church’s first pastor, James Shannon, was a professor of ancient languages at UGA, and a number of other pastors in the 1800s had university ties.

Chapters cover the founding years, building the church in the antebellum period, transitions in the decade after the Civil War as well as the growth and expansion in the late 19th and early 20th centuries. The book also covers developments during the administrations of prominent -ministers. Always Becoming New concludes with an index of topics and people referenced in the book.