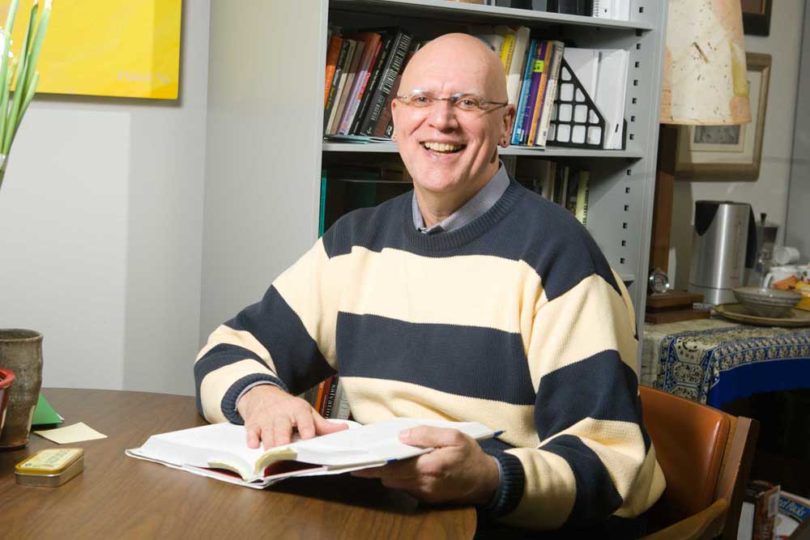 Robert Hill recently received one of four 2008 President’s Fulfilling the Dream Awards for his work for greater acceptance and tolerance.

Robert Hill works for greater acceptance and tolerance for all people by teaching adult education in the context of social justice rights. But if you tighten the lens, he often focuses specifically to further acceptance of the Lesbian, Gay, Bisexual, Transgender and Queer community.

Twice in a recent interview he referenced the adage, “There is room for all of us at the table.” On the surface, it’s a metaphor, but it also works literally for Hill, a recipient of a 2008 President’s Fulfilling the Dream Award and associate professor in the department of lifelong education, administration and policy.

On his desk in the River’s Crossing Building, Hill keeps a stack of books that includes tomes on Zen Buddhism, Christianity, Hinduism and The Art Lover’s Almanac.
These books, representative of various peoples and ideologies, form the basis of what could be called his professional philosophy: People and traditions are worthy of dignity and respect; our lives are a sojourn across hallowed ground.

“At a land-grant university, we have a responsibility to be public intellectuals, and there are two components to that,” he said. “One is that we are engaged in the public sphere, that we make our work here known and make the walls of the ivory tower very porous. The other thing is a call to be deeply scholarly.”

As a testimony to the latter, you can find him drawing on such diverse sources as the Grateful Dead, rap music, Chaucer and Milton. He also pulls from religious traditions, saying, “all the great faith families have something to teach us.”

The President’s Fulfilling the Dream Award is given annually to local community leaders  who work to achieve the Rev. Dr. Martin Luther King Jr.’s dream of universal equality and justice.

Hill’s work extends these notions throughout campus, the state, the nation and the globe. After coming to UGA in 2001, he helped found the Campus Climate Research Group, whose report, “In the Shadow of the Arch: Safety and Acceptance of Lesbian, Gay, Bisexual, Transgender and Queer Students at the University of Georgia,” was a monumental step toward acceptance and tolerance for the LGBTQ community at UGA.

Hill has partnered with UNESCO, the United Nations’ peace promotion wing, to spearhead efforts to add human rights and social justice in all of their educational efforts.
He also has worked with schools and programs across Georgia and the U.S. by teaching workshops on topics such as environmental racism and educating people on sexual orientation and gender identity.

Although his work for sexual minority rights may seem like a progressive-minded call for justice, it is actually an old-fashioned revival of a rarely cited aspect of King’s dream.

“Unlike many people in his time—and today as well—Dr. King knew the value of lesbians and gay men and their contributions to the civil rights movement,” Hill said.
He pointed to Lillian Smith, a lesbian whom King mentions in his “Letter from a Birmingham Jail,” and Bayard Rustin, a gay man who helped organize the Montgomery, Ala., bus boycott.

“Another world is possible. My work in adult education is largely about that. But I would take that statement further,” Hill said. “I would go so far as to say that another world is absolutely essential.”