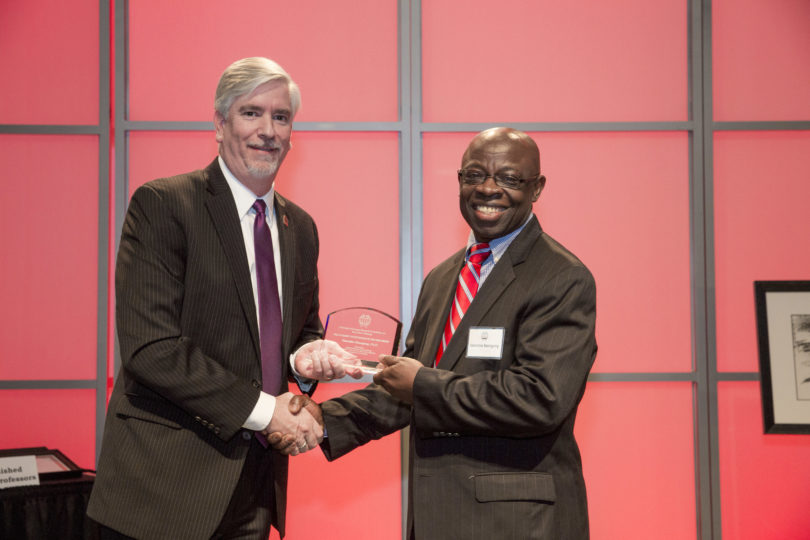 Valentine Nzengung, professor of environmental geochemistry in the Franklin College Department of Geology, has been named a Fellow of the National Academy of Inventors, becoming the eighth UGA faculty member to receive the honor, all since 2013.

Nzengung is the founder and CEO of MuniRem Environmental, which provides remediation products and services for soils and physical sites that have been contaminated by residues from munitions and also for the neutralization and destruction of explosives in support of demilitarization. He has developed multiple sustainable remediation technologies that MuniRem employs in its services. In October 2019, Georgia Trend magazine picked MuniRem as “a trendsetter and planet protector.”

The NAI Fellows program highlights academic inventors who have demonstrated a spirit of innovation in creating or facilitating outstanding inventions that have made a tangible impact on quality of life, economic development and the welfare of society. Election to NAI Fellow is the highest professional distinction accorded solely to academic inventors. To date, NAI Fellows hold more than 41,500 issued U.S. patents, which the organization says have generated more than 11,000 licensed technologies and companies and created more than 36 million jobs. According to NAI, $1.6 trillion in revenue has been generated based on NAI Fellow discoveries.

“This is a humbling endorsement of the applied research I have focused on as a faculty member at the University of Georgia,” Nzengung said. “I never thought of the solutions to environmental problems that I have developed as deserving of this very high level of recognition. My focus has been and remains developing and applying innovative solutions that benefit human health and our environment.”

The 2019 Fellow class represents 136 research universities and governmental and nonprofit research institutes worldwide and collectively hold over 3,500 issued U.S. patents. Among the 2019 Fellows are six recipients of the U.S. National Medal of Technology & Innovation or U.S. National Medal of Science and four Nobel Laureates, as well as other honors and distinctions. Their collective body of research covers a range of scientific disciplines including neurobehavioral sciences, horticulture, photonics and nanomedicine.

“Valentine’s selection as an NAI Fellow is a testament both to his ingenuity and dedication as a scientist and to UGA’s commitment to innovation that benefits the broader world,” said David Lee, vice president for research. “I congratulate him on this honor, and my hope is that he and our other NAI Fellows serve as inspirations to their fellow investigators at UGA.”

“My election happened in part because of the enabling environment created by UGA’s administration to foster innovation and academic inventions by its students and faculty,” Nzengung said. “The years ahead at UGA look even more promising for faculty and students engaged in applied research.”

The new NAI Fellows will be formally inducted at a ceremony during the NAI annual meeting, to be held April 10, 2020, in Phoenix, Arizona. Laura Peter, deputy undersecretary of commerce and deputy director at the U.S. Patent and Trademark Office, will keynote the event.