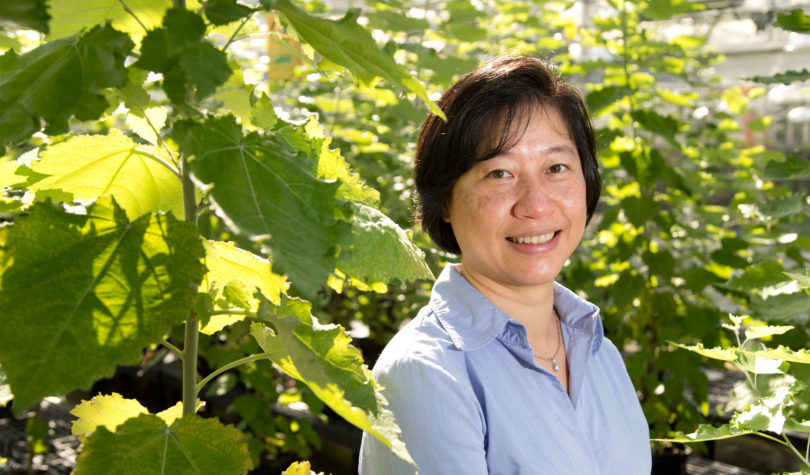 Chung-Jui “C.J.” Tsai has a lot of patience. Anyone studying forestry does, as trees don’t exactly grow fast. But Tsai has a different kind of commitment that she combines with an eye for complicated details. As UGA’s Winfred N. Hank Haynes Professor in forest biotechnology, Tsai wants to grow better trees to use in biofuel-and she knows that might take a while.

“Biofuel could help revitalize the forest industry,” Tsai said. “But turning trees into fuel is a tricky thing, and it won’t happen right away.”

Since joining the faculty of the Warnell School of Forestry and Natural Resources in 2008-she also has a joint appointment in the genetics department in the Franklin College of Arts and Sciences-Tsai has focused her research on breaking down the complex genetic codes that hold the secret to growing better and smarter trees. Her interests probe the genetics of tree defense mechanisms, and her team recently had a breakthrough in discovering how poplar trees can be coaxed into raising their salicylic acid levels without negative side effects. Salicylic acid is crucial for protecting plants from everything from extreme temperatures to diseases, but increasing this chemical without inhibiting growth has been a hurdle for plant researchers.

“We are able to increase salicylic acid levels by a thousandfold in poplars, and we know our method also works in other plants,” Tsai said. “This is exciting not just for its agronomic potential, but also for its value in basic research-we can study the response mechanisms without the growth complications.”

Tsai certainly gave UGA’s bioenergy initiative a boost, arriving here as a Georgia Research Alliance Eminent Scholar after some convincing recruitment by UGA. Tsai has published dozens of peer-reviewed articles and holds six patents that involve methods ranging from wood fiber-specific gene switches to modification of lignin, the key component that acts as glue in trees but also hinders efforts to extract the much-desired cellulose, which is vital to biofuel production.
It’s her bioenergy research that brought Tsai to UGA’s attention. Tsai believes that if she can exploit tree genetics, then trees can be created that grow faster and fight off disease and pests better.

Her team, which includes research scientist-and husband-Scott Harding, also has been attempting to increase tree productivity by genetically modifying certain proteins critical to wood formation. Sucrose transporter proteins shuttle food from leaves throughout the rest of the tree, delivering sugars produced in leaves during photosynthesis to other parts of the growing plant that do not carry out photosynthesis. The well-known examples include grain or tubers in food crops.

Tsai and Harding were surprised to discover that sucrose transporter genes are very abundant in the developing wood of young trees. They hope that tweaking the proteins will modify the way trees divide their photosynthate (sucrose and other sugars) between wood-forming and other organs like roots and bark.

Her team also is studying a protein family called tubulin, which is found in both animals and plants and plays critical roles in many processes such as cell division and expansion.

By modifying tubulin proteins, they hope to engineer trees with not only altered cell wall properties, but also stomatal response to drought stress.