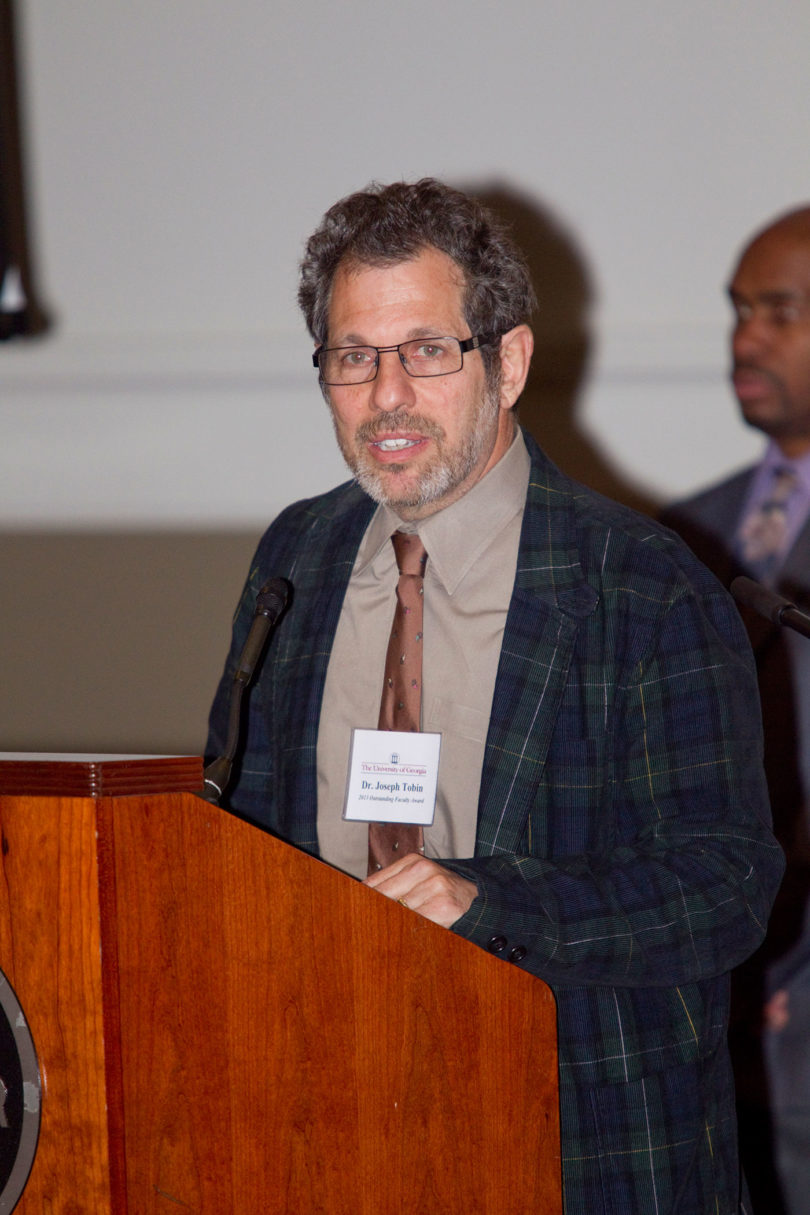 As Joseph Tobin accepted the Disability Resource Center’s Outstanding Faculty Member Award for 2013-2014, he gave credit to the student who nominated him as well as those in the center who work hard to aid those with disabilities.

“I’m very pleased to have this award, but it’s mostly because of the pleasure I’ve had with working with Patrick Graham,” Tobin said. “He’s among just a handful of deaf students who communicate with sign language who are receiving a Ph.D. from any university that doesn’t teach in sign language. That’s not just to Patrick’s credit or to mine; because of the Disability Resource Center at the University of Georgia, this has been possible.”

Graham nominated Tobin, the Elizabeth Garrard Hall Professor in the College of Education, for his positive attitude and the constant encouragement he gives to all his students. Graham wrote in his nomination that Tobin deserved much of the credit for helping push him further in his experiences in education and being a teaching assistant.

“I know if it wasn’t for him, I would not be a doctoral candidate, and many ‘Orientation to Early Childhood Education’ students would not have had the experience of having a deaf instructor,” Graham wrote.

Tobin told those in attendance at the Oct. 24 Student and Faculty Recognition Reception that he is extremely grateful for all the work the staff at the Disability Resource Center does.

“I want to also point out that Patrick and others need the resources offered by the Disability Resource Center, but so do I,” he said. “I’m equally disabled; I’m no more able to communicate with Patrick in sign than he is able to survive in a speaking environment. I would not be able to have the pleasure of working with Patrick and other deaf students if it weren’t for the incredible services.”

Graham, recipient of the Joe Coile Award, was one of 20 graduate and undergraduate students who received scholarship awards at the reception. Each of the recipients had a chance to thank the private donors for their support and share their experiences of living with a disability.

Lauren Collins, one of three recipients of the Gregory Charles Johnson Scholarship, said her learning disability has presented her with many challenges.

“Ultimately, other college students may only need four years to complete a degree, but some students with learning disabilities may take five to six years,” she said, adding that she would not be able to continue educating herself without support from people like the donors.

“I have learned that my disability does not define me and that I have a lot of love and support as I pursue my college education,” she said.

Victor Wilson, vice president for student affairs, said he was inspired and humbled by the students who received scholarships at the event.

“One of the things that was most encouraging to me was that almost every single one of the students got up and said ‘I will not let my disability overcome what I want to be,’ ” he said. “And I hope you never lose that passion to continue to overcome the disability. We’re so encouraged and so proud of what you have to do every single day.”