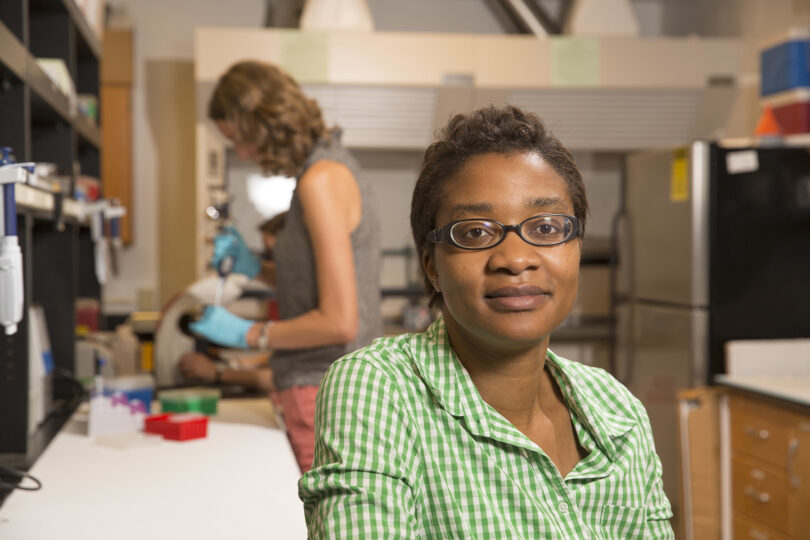 A professor in the Odum School of Ecology and College of Veterinary Medicine department of infectious diseases, Vanessa Ezenwa’s research integrates perspectives that range from the microbial to the ecosystem scale. (Peter Frey/UGA)

A professor in the Odum School of Ecology and College of Veterinary Medicine department of infectious diseases, Ezenwa’s research integrates perspectives that range from the microbial to the ecosystem scale. Her work explores the ways that parasites influence the social behavior of large mammals and how that social behavior in turn influences parasite transmission. Her goal is to understand how those dynamics affect not only individuals but entire populations and communities of both parasites and hosts. And while she generally studies ungulates, her findings have implications for human health, as well.

Ezenwa, a recipient of a CAREER award from the National Science Foundation who came to UGA from the University of Montana in 2010, didn’t set out to study the relationships between parasite transmission and social behavior in animals. As an undergraduate biology major at Rice University, her plan was to attend medical school—until, that is, she had the chance to work in a lab that focused on animal behavior.

“Since high school I was quite interested in infectious diseases as related to medicine, but working in that lab got me interested in ecology and evolution,” she said. “Fast forward, I decided to go to graduate school to study animal behavior. I got introduced to the idea that how animals were socially organized, the types and size of groups they lived in and how fluid those dynamics were, that those things were associated with the transmission of parasites, and in turn that parasites actually drive the evolution of social organization in animals.”

Ezenwa did her doctoral research at Princeton University on African ungulates in Kenya, where many species overlapped in the same locations. Her dissertation focused on 11 species that varied from living singly or in pairs to living in groups of 100 or more.

“It really gave me the range of social types to look at, but at the same time I realized they’re all living together and they’re grouping together, as well. They often transmit the same parasites amongst one another and are infected by multiple parasite species simultaneously,” she said. “That has really shaped a lot of my research ever since.”

A major theme of her current work is understanding the effects of coinfection by more than one parasite and/or pathogen on individuals and populations. In particular, she is investigating how the immune response to one pathogen influences the outcome of infection to another.

“This work is inspired by a lot of work in humans, where for a long time people have been interested in the effect of parasitic worms—because they’re so common in humans in some parts of the world—on diseases caused by microbes like tuberculosis-causing bacteria and HIV, and what the connections are,” she said. “I’ve been fascinated by the fact that we can try to understand these ideas and the underlying mechanisms, and also how they influence large-scale population level patterns of pathogen spread, in wildlife, potentially more easily than we could ever understand it in humans.”

Ezenwa’s interest in exploring these questions from the microbial to the community level led her to develop the Infectious Disease Ecology Across Scales (IDEAS) doctoral training program. With funding from the National Science Foundation, the program introduces students to the study of infectious diseases from multiple scales and disciplinary perspectives.

“Our goal is to train up-and-coming scientists studying infectious diseases to appreciate cross-scale linkages,” said Ezenwa. “And by cross-scale, it’s really different levels of biological organization, from the smallest to the largest, and realizing that all of these steps along the hierarchy actually matter.”