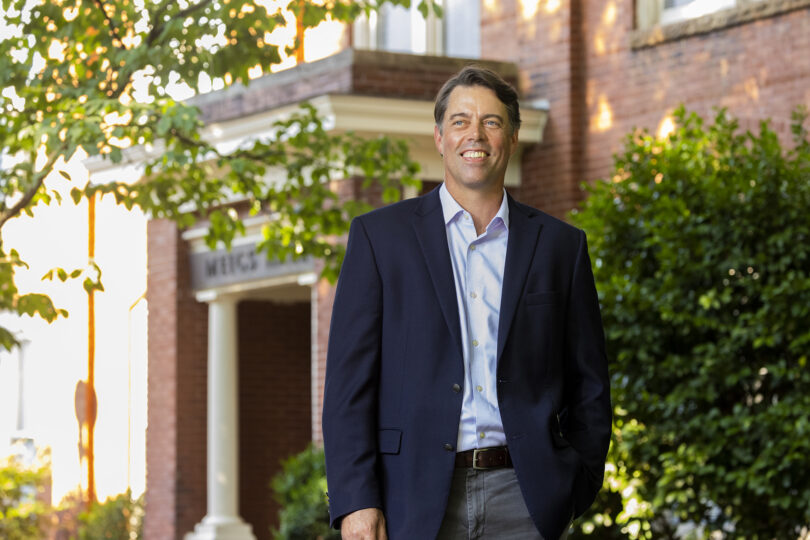 Erik Ness is the the graduate coordinator and a professor of higher education in the Louise McBee Institute for Higher Education. (Photo by Dorothy Kozlowski/UGA)

Erik Ness has personified the mission of the Louise McBee Institute of Higher Education for the past 13 years.

As the graduate coordinator and a professor of higher education in the institute, Ness teaches students about the ins and out of education policy in Georgia and beyond and works with the graduate programs to help students make meaningful connections during their time at UGA.

His own path to UGA was serendipitous and began at North Carolina State where Ness earned a B.A. in political science.

“I knew I was interested in politics, broadly, and thought I wanted to be either a lawyer or a high school history teacher,” said Ness.

He decided instead to pursue a master’s degree in comparative and international education at Loyola University in Chicago, culminating in a thesis on values education in West Africa.

“It’s writing that master’s thesis that pointed me towards thinking that a more academic career might be something that I would be interested in,” he said. “I really enjoyed that process, and I remained interested in education.”

While working toward his Ph.D. at Vanderbilt University, Ness served as a policy analyst for the Tennessee Higher Education Commission, a group roughly comparable to the University System of Georgia Board of Regents.

“Really it was those pair of experiences, on the graduate school side learning about new theories and research methods and then working in the state higher education office, that I got to see ‘the sausage being made’ of state policy,” said Ness.

At the time, Tennessee was considering adopting a similar scholarship program to the HOPE Scholarship in Georgia. Ness traveled with other state policymakers to Athens to meet with two economists and learn from Georgia’s HOPE Scholarship. They hoped to learn how something similar could be enacted in Tennessee, and in 2009 they began offering their own HOPE scholarship for Tennessee universities.

“In fact, the state senator who was the sponsor for the Tennessee scholarship bill had little bracelets made that said, ‘What would Georgia do?’” said Ness.

Years later, a position opened up at the then-named UGA Institute of Higher Education.

“My dream job opened up. I’ve always admired UGA from that first visit, and I got to know faculty and students from the institute,” said Ness.

Going beyond the classroom

Throughout the past 13 years at UGA, Ness has taught a variety of classes on education policy and developed his own coursework to follow and examine his research interests and other topics in the field of higher education.

One of these courses, a seminar titled, “Research Evidence, Alternative Facts, and Fake News,” won a First-Year Odyssey Teaching Award in 2021 and continues to be a passion project of his. He says that in any political space, it’s important to lean on research evidence when considering alternative viewpoints. This type of evidence-based thinking also directly ties into his research focus.

“One [project] that I’m really excited about now is a chance to study how states authorize various post-secondary education institutions. That could be anything from for-profit colleges to more vocational training opportunities. There is wide variation as to how states do that, so I’m excited to collaborate with two of our students on that project,” he said. 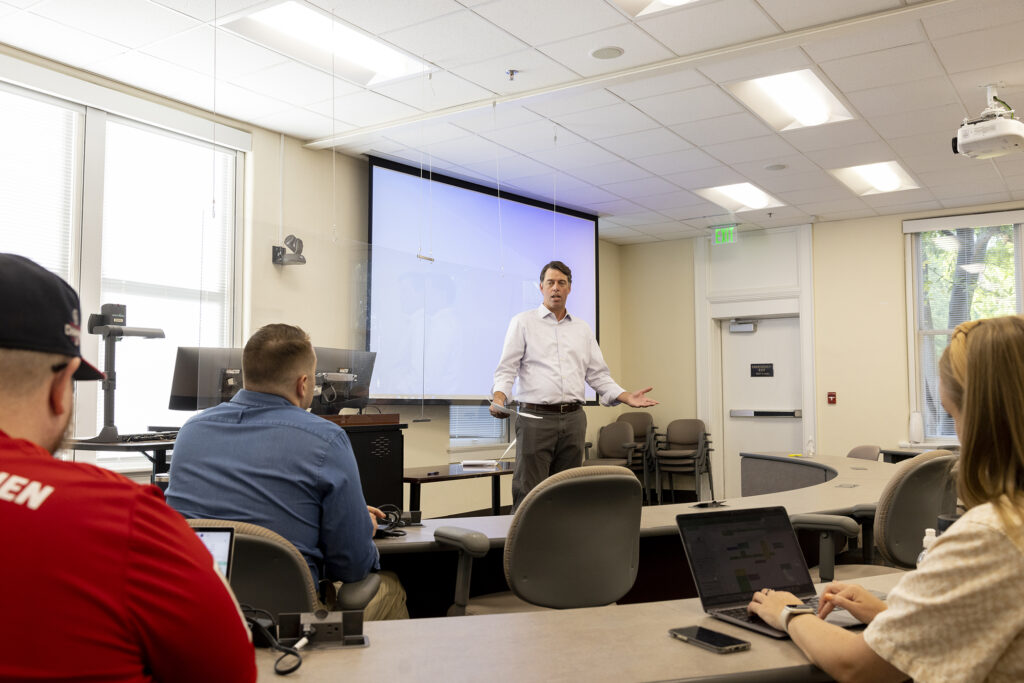 Erik Ness has taught a variety of classes on education policy in the Louise McBee Institute for Higher Education. (Photo by Dorothy Kozlowski/UGA)

Ness also teaches a course focusing on state systems of higher education, and he structures the class to make real differences in state policy.

“What I really try to do is get folks who are in the university system to tell me what the hot topics are in higher education. What do you need help on?” he said.

He then assigns those hot topics to his students. The reports that his students produce are given back to higher education leaders and can even help teach them something that they can use in policy. Ness says this is one way to ensure that students are working with topics that are important to the greater conversation around higher education, and not just topics that he finds interesting as a researcher.

“It’s really amazing how many offices our students have been able to gain important experience in, and it has led to career opportunities for them,” Ness said. “Because our program is an applied program, we are teaching students how to be leaders in higher education either as researchers or administrators, so we find that our students have a lot to offer to other academic units and other public service units on campus.”

Ness works to recruit new graduate students and emphasizes the community at the Louise McBee Institute of Higher education as a major draw for prospective students.

“The way that we try to distinguish ourselves is that we have a sense of community here that we are really proud of,” said Ness. “We want students to come here to be in an environment where they can learn from one another, and we are very intentional about our advising relationships that we set up.”

Outside of the classroom, Ness is just as passionate, but this time it’s directed toward his children.

Ness says that most of his Friday nights and weekends are spent around a ball field or at a dance performance for his three children. Whether in a coaching role or as a supportive parent, he finds joy in watching his children pursue their passions and interests.