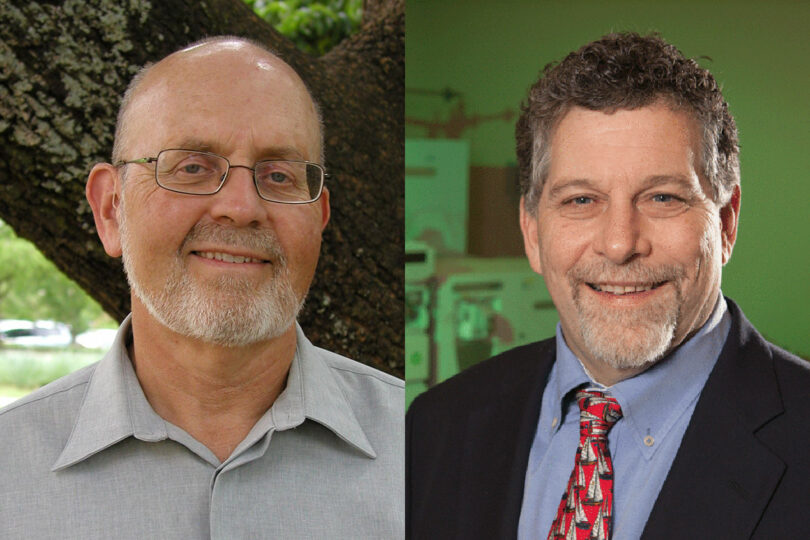 The National Academy of Inventors has named two University of Georgia faculty members to the 2020 class of NAI Senior Members.

Richard Meagher, Distinguished Research Professor of Genetics, and Ronald Orlando, professor of biochemistry and molecular biology, and chemistry, are the first UGA researchers to receive the senior membership distinction. They join a new class of 38 prolific inventors representing 24 research universities along with government and nonprofit research institutes worldwide.

Meagher has dedicated nearly five decades to performing pioneering research across several diverse biotechnology disciplines, including plant molecular genetics, monoclonal antibody development and epigenetics. His research contributions at UGA have led to 58 invention disclosures, eight issued U.S. patents and one pending U.S. application. He’s also co-founded four biotechnology companies based on these technologies. One company, Abeome, is developing therapeutic antibodies against inflammatory and other diseases. Meagher received the UGA Inventor’s Award in 2004 and the UGA Entrepreneur’s Award in 2017.

“Consistent encouragement by my colleagues and the creative environment at UGA have been essential to this recognition by NAI and much of my success as an inventor and entrepreneur,” said Meagher.

Orlando joined the Complex Carbohydrate Research Center in 1993 and leads a prominent research group dedicated to glycobiology and biochemistry. He holds two U.S. patents and four pending patent applications and has appeared as an inventor on 17 invention disclosures ranging from software to novel compounds and methods of analysis. Orlando has launched three startup companies based on UGA-licensed technology that have raised more than $7.8 million in funding and launched 57 new products. He serves as CEO of GlycoScientific, an Innovation Gateway resident company developing research tools and potential therapeutic antibodies for cancer, and was the inaugural recipient of the UGA Entrepreneur’s Award in 2010.

“I am deeply honored to have been elected as a senior member of the National Academy of Inventors, but I am not the only person deserving recognition for this honor,” Orlando said. “Innovation Gateway provided the guidance and infrastructure I needed to move my research into the marketplace.”

The NAI Senior Member program recognizes national and international academic inventors who have demonstrated success in developing new technologies that benefit society. Senior members are elected biennially and undergo a rigorous selection process by the NAI Advisory Committee, which is composed of elected NAI members and other professionals considered pioneers in their respective fields.