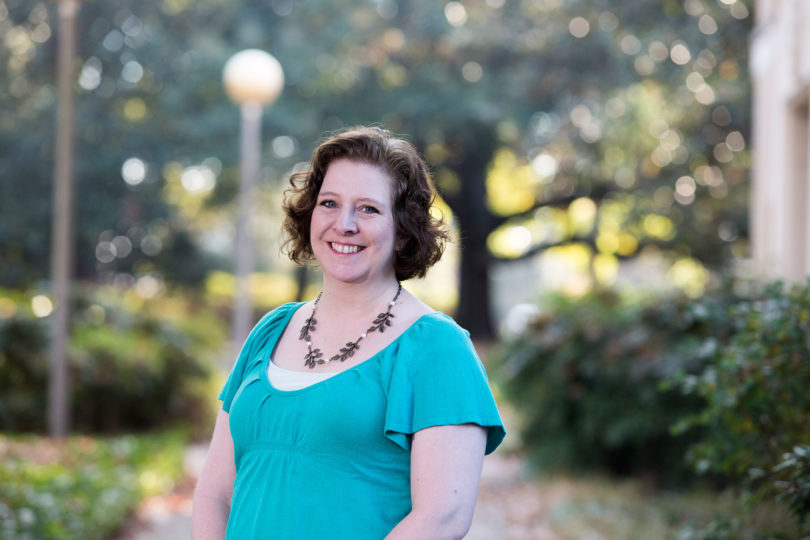 Heidi Ewen is an assistant professor in the financial planning

The middle of an Illinois cornfield, it turns out, can prove fertile ground for a career in academic research.

Heidi Harriman Ewen spent her formative years there in the Midwestern quiet, shaped by regular journeys to the local nursing home and senior center where her mother taught quilting and gardening classes and by daily conversations with her nearby grandparents.

Those early years spent sitting under a quilting frame or on the porch in conversation with her grandparents provided the foundation for Ewen’s eventual career as an aging-in-place and relocation expert.

“I spent the majority of my childhood with older people,” she said. “It had a huge influence on me.”

Now an assistant professor in the financial planning, housing and consumer economics department of the College of Family and Consumer Sciences, Ewen also has a joint appointment in the Institute of Gerontology in the College of Public Health.

Her primary scholarly work deals with the ways in which older adults make decisions about where to live, whether aging-in-place in their own homes or relocating; how they adapt their environment or themselves as they age; and stress and adaptation.

Her current research focuses on low-income older adults and how they manage finances, housing and health.

Those seeds were planted early, she said.

“I learned a lot of things I don’t think my peers knew about,” Ewen said of those early days. “A lot of it was just listening to them talk. The women’s stories were fascinating to me. The old women used to tell me, ‘You need to take every opportunity given to you. We didn’t have those kinds of things.’ ”

As part of her master’s work in the late 1990s, Ewen began interviewing residents of low-income housing facilities about how they developed coping strategies for dealing with stress.

“I became fascinated with how people made the decisions to move,” Ewen said. “Either they planned 10 years in advance or it was the result of a huge crisis. There wasn’t a whole lot in between.”

Ewen later went on to receive a doctorate in gerontology and behavioral science from the University of Kentucky, one of only seven gerontology programs in the country at the time.

Ewen began at UGA in 2014, and splits her time between research and teaching housing for aging populations and family demographics within FACS and on the biopsychosocial aspects of aging and health in the Institute of Gerontology.

The joint appointment makes for an interesting dynamic in the classroom, where issues of aging and housing intersect.

“A lot of our (gerontology) students are master’s of public health/master’s of social work dual-degree students, so they’re the front line people who are out there helping older adults transition from home to hospital to rehabilitation and back home,” Ewen said. “They also work in hospice and provide support to those who are dying and their families.”

Her methodology for the FACS housing classes is a little different, focusing more on the need for senior housing, home and community-based services, and housing modifications to enable older people to stay in their homes.

Ewen said she feels fortunate her career has coincided with the emergence of the senior housing industry, particularly the enormous growth of retirement communities for both independent and assisted living, driven largely by the retirement of the baby boomers.

“Back when my grandparents were alive, about the only options were nursing homes and trailer park communities in the Sun Belt states,” Ewen said. “Now we have these varied facilities for healthy, active older people as well as those who need more support. A lot of those have dementia care attached to them, too. It has been rewarding to see it change.”

Ewen added she’s grateful to have found a home at UGA where interdisciplinary work is valued and encouraged.

“I cannot imagine a better fit for my research and teaching,” she said. “It’s the perfect blending for imparting knowledge and skills to our students so they may address the needs of an aging population.”