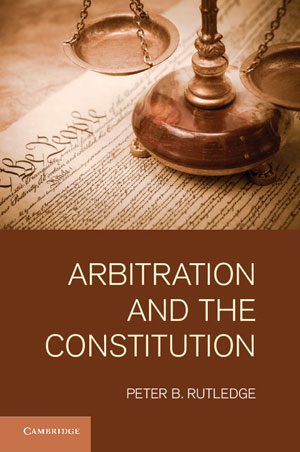 Arbitration and the Constitution
By Peter B. Rutledge
Cambridge University Press
$99

Arbitration has become an increasingly important mechanism for dispute resolution, both in the domestic and international setting. Despite its importance as a form of state-­sanctioned dispute resolution, it has largely remained outside the spotlight of constitutional law.

Arbitration and the Constitution, written by Peter B. Rutledge, the Herman E. Talmadge Professor in the School of Law, represents one of the first attempts to synthesize the fields of arbitration law and constitutional law.

Drawing on Rutledge’s extensive experience as a scholar in arbitration law-he has lectured and studied around the world-the book offers unique insights into how arbitration law implicates issues such as separation of powers, federalism and individual liberties. The book also discusses the ways that two fields of law influence each other beyond the express application of doctrine.