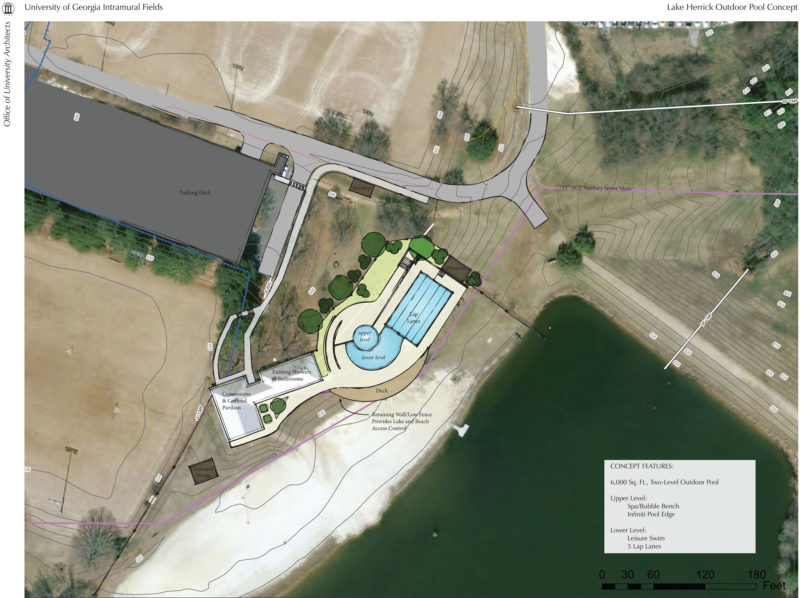 The proposed intramural pool concept is designed for location on Lake Herrick.

Athens, Ga. – The Lake Herrick outdoor pavilion will get a student-friendly facelift if a University of Georgia project proposal is approved by the University System of Georgia Board of Regents in August. The concept includes plans for a 6,000-square-foot outdoor pool.

The board will consider the university’s integrated review concept at its August meeting. Pending approval of that, UGA will seek project approval at the board’s September meeting.

The pool project is estimated to cost $2.6 million. If the proposal is accepted, design will begin in October and construction will start in January in preparation for a May 2013 opening.

“At Lake Herrick, the recreational fields and trails around it are in active, heavy use,” said Lara Mathes, who is overseeing the project and is the assistant director of campus planning in the University Architect’s office. “The lake itself has been closed for some time. They had to close down the beach and pavilion when water quality levels could no longer support a public swimming area.”

If approved, the Lake Herrick pool will replace the existing Legion Pool located on Lumpkin Street. The 1935 facility is in need of extensive repairs and has become too costly for the university to maintain in an appropriate manner. The new pool will be designed to minimize waste and use natural resources as efficiently as possible.

The land where Legion Pool is now located is projected to be incorporated into the student housing on Baxter Street. As a campus quad and green space, the acreage will complement and support the master plan for that housing area.

The proposed pool will be situated overlooking Lake Herrick, and the space will include a 16,000-square-foot deck and two pool levels. The lower level will have a recreational swimming area and five 25-yard lap lanes. The upper—and smaller—level will house a spa/bubble bench with an infinity pool edge.

“The new design will afford views of the lake and Oconee Forest Park,” Mathes said. “I’m glad this site was selected for the new pool.”

Funding for the project will come from various sources—$1 million from Student Affairs reserves, $600,000 in internal plant funds and $1 million from the UGA Athletic Association. The majority of the costs are associated with building the new facility.

The budget also includes renovations to the existing Lake Herrick pavilion, which will be incorporated into the pool’s design. The building will house updated restrooms, changing rooms, a lifeguard office and concessions.

Mathes says the new pool’s location will work well with the rest of the intramural facilities. Plus, the existing campus bus stop and intramural fields parking deck will serve pool users, negating the need for additional infrastructure.

“We will have good synergy going on over there with the pool and the other recreational uses,” she said.

Besides recreation, the new pool will also be used for physical education classes. Recreational Sports will oversee the new facility.