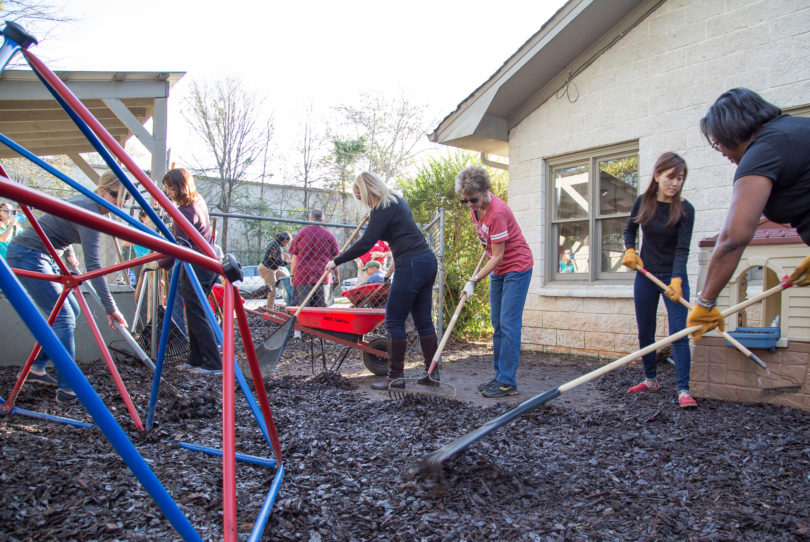 Athens, Ga. – Gwen Moss works for the University of Georgia’s Office of Public Service and Outreach but that doesn’t mean she’s on the ground serving every day.

The assistant vice president for fiscal affairs is more often in the office, so when PSO launched its first Day of Service, Moss jumped at the chance to contribute to the mission she supports daily.

“My position keeps me in the office and behind the desk,” Moss said during a break while working on the grounds at Stroud Elementary School in Athens. “So this is an opportunity to get out and, you know, do service work like the other Public Service and Outreach staff do all across the state. This is a perfect opportunity for me to get my hands dirty.”

That was one of the driving ideas behind PSO’s first Day of Service on Nov. 20. Staff and faculty members and students from the eight units of Public Service and Outreach fanned out to nine sites while also participating in a supply drive for Mercy Health Center and the Athens Area Homeless Shelter, and a coat drive for the Salvation Army. Some contributions began the day before with UGA Campus Kitchen, which is a part of the Office of Service-Learning, delivering meals and sorting food at the Northeast Georgia Food Bank on Nov. 19.

According to Josh Podvin, from the Office of Service-Learning, who coordinated the projects for the Day of Service:

• 189 individuals from UGA Public Service and Outreach, as well as several from UGA Extension and unit-based outreach offices, participated in at least one project;
• 113 people donated supplies for local nonprofits;
• Employees performed 235 total hours of service at project sites; and
• 189 coats were collected for the Salvation Army’s annual winter coat drive.

Jennifer Frum, UGA vice president for public service and outreach, participated in several projects and stopped by others to thank employees for their contributions to the effort.

“We try to get together once a year to celebrate our work and celebrate the impact of the work that the University of Georgia does across the state,” Frum said. “Our faculty and staff really wanted something more meaningful than an ice cream social or a barbecue lunch. So our faculty and staff asked the question, ‘How can we do something where we come together as a group but we’re also making a difference?’ We couldn’t think of a better way to do that than working with our great external partners in the Athens community.”

Employees were enthusiastic about the day, including the State Botanical Garden of Georgia’s William Tonks, who helped out with a number of projects centered on the Clarke Middle School garden on Baxter Street.

Across town on Hawthorne Avenue, the Georgia Center for Continuing Education’s EJ Hovell was among a large group of PSO employees helping the Project Safe Thrift Store organize its shelves. Hovell and her co-workers stumbled on a number of interesting items, including a folder the Georgia Center had once produced for a conference.

“For those of us who are actually involved in community service yearlong, it’s an opportunity to learn about new projects especially perhaps in a county in which we don’t live,” said Hovell, a resident of neighboring Oconee County. “I love what Project Safe does. I’m a firm supporter in the support that they offer people who are trying to flee and rid themselves of a situation of abuse. I know this is a major moneymaker for them. It’s hard to run a thrift shop.”

Other projects included cleaning at the Interfaith Hospitality Network, a pollinator project at Coile Middle School, meal box preparations for Campus Kitchen’s Turkeypalooza at the Athens Area Council on Aging, some brush clearing and the construction of an amphitheater at the Center for Hard to Recycle Materials on College Avenue and spreading mulch on a playground at the Athens Area Homeless Shelter.

The UGA Small Business Development Center’s Melissa Stoker chose to spend her morning at the Interfaith Hospitality Network, a place where her mother used to work. Like Moss, she said it felt good to be out and doing work the community would appreciate.

“I thought (a day of service) was a great idea,” Stoker said. “We are turning around and doing the things the community needs us to do.”

The Office of Public Service and Outreach includes the Archway Partnership, the Carl Vinson Institute of Government, the J.W. Fanning Center for Leadership Development, the Georgia Center for Continuing Education, Marine Extension/Georgia Sea Grant, the Small Business Development Center, the State Botanical Garden of Georgia and the Office of Service-Learning, which also reports to the UGA vice president for instruction.