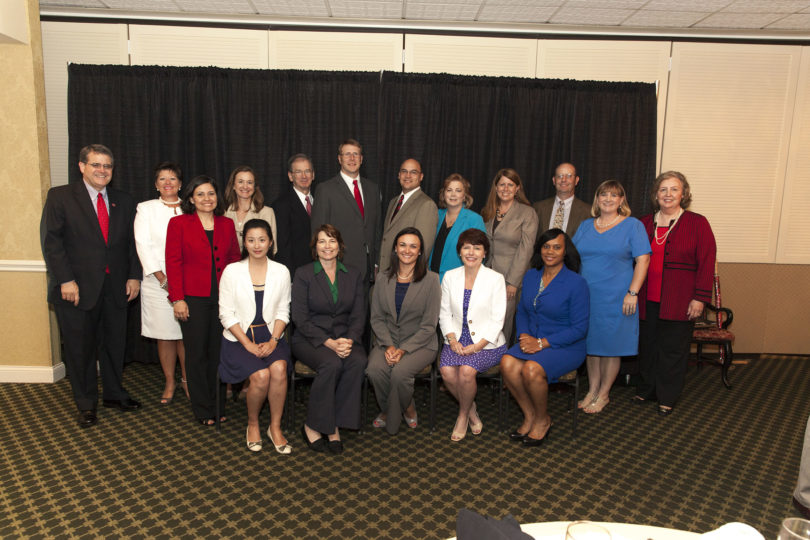 Seventeen UGA faculty and staff graduated from the public service and outreach leadership academy June 2, then turned the tables on academy leaders, presenting them with a class gift, a pledge of $4,200 to help support the leadership academy in the future.

Members of the 2013-2014 Vivian H. Fisher Public Service and Outreach Leadership Academy raised the money in the five days prior to their graduation, which followed a nine-month course to help them develop a deeper understanding of the scope and reach of public service at UGA. This year is the first time a leadership class has joined together to make a gift. However, alumni of the leadership academy have given more than $11,000 since the program was renewed in 2011.

“There are a number of examples where this year’s class has taken the leadership development, networking and learning experiences of the academy and created collaborative projects across public service and outreach and UGA as a whole,” said Matt Bishop, director of the Fanning Institute for Leadership Development, which facilitated the program. “The gift to the academy represents a keystone example of that collaborative leadership. The gift will have immediate impact ensuring the academy is successful in the future.”

UGA President Jere W. Morehead was the keynote speaker for the graduation ceremony.

“The work that you do is the kind of work that keeps us front and center when it comes to the people of the state of Georgia,” Morehead said. “You do the work that tells our story across the state in so many ways.”

The academy began in 2006, under the direction of then-Associate Vice President for Public Service and Outreach Vivian Fisher. It was discontinued in 2008 due to state budget cuts. Fisher retired in March 2008 and died just six months later. The program was reinstated in 2011, and Frum announced at the graduation of the 2011-2012 class that it would be named for Fisher to honor the service she provided the university and state. Fisher’s husband, Dexter, attended the June 2 ceremony.

The 2013-14 Leadership Academy kicked off with a two-day session in Athens last October. Since then the group met eight times before the June graduation. They learned about each unit of public service and outreach and UGA Extension. In addition, they explored a variety of leadership development topics.