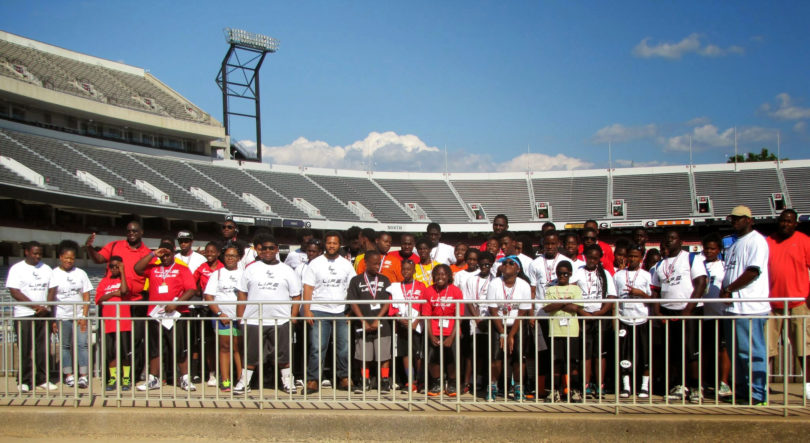 The Hawkinsville/Pulaski County LIFE League visited the UGA campus July 16 and took a picture in front of Sanford Stadium.

Athens, Ga. – More than 40 minority students from middle Georgia spent a day at the University of Georgia on July 16 touring the campus, talking with admissions advisers, eating in a dining hall, meeting athletes and playing basketball.

The 2014 Hawkinsville/Pulaski County LIFE League championship game day at UGA was hosted by the UGA Archway Partnership and the Office of Institutional Diversity. The trip was the culmination of the LIFE League program, which teaches life skills and encourages excellence through basketball and other programs for at-risk youth in Pulaski County. The group’s organizers wanted to expose the students to future opportunities in higher education by bringing them to the state’s flagship university.

“We want you to think of yourself as a University of Georgia student,” said Michelle Garfield Cook, UGA associate provost for institutional diversity, in welcoming the students to campus.

While on campus, the youths played their championship and third-place basketball games at the Ramsey Student Center for Physical Activities. They toured the recreation facility, as well as Butts-Mehre Athletic Heritage Hall, and had an opportunity to talk to UGA athletes Nasheema Oliver, Kenny Gaines, Marcus Thornton and Chris Conley. They had lunch at the Village Summit dining commons and participated in an interactive session with Office of Undergraduate Admissions. LIFE Leaguers ended their day with pictures in front of Sanford Stadium before heading back to Hawkinsville.

Formerly known as the Hoops League, LIFE League was founded in 2012 by three Pulaski Tomorrow graduates-Tyler Jenkins, Jeﬀ Tarver and Nevin Shennett-who wanted to make an impact in their community. Pulaski Tomorrow is the local leadership program developed through the Pulaski County Archway Partnership. The LIFE League has expanded to Fort Valley and is planning expansion into Warner Robins and Perry.

“We’ve just taken the lessons we learned in our Pulaski Tomorrow classes and put them into action,” said Jenkins. “Isn’t that what it’s all about? We should take our resources and use them to better our community.”

As part of the LIFE League, students spend their Saturdays learning life lessons in areas such as financial responsibility, personal accountability, job interviewing and preparing for college. As a primary focus this year, Tarver asked the students to promote discretion on social media. He awarded students who had improved their social media profiles with tickets to an Atlanta Dream basketball game or an Atlanta Falcons football game. Jumani Stephens, a rising senior, was awarded a $500 scholarship for college expenses.

“Whatever you aspire to do, you can achieve. Do not be mediocre. Be great,” Tarver told them. “It’s not really about basketball. It’s about life.”

“The Archway Partnership was created to connect communities with higher education resources,” said Archway Partnership Director Mel Garber. “The LIFE League and this type of event is a perfect example of how those two entities can work together to enhance Georgia’s future workforce. Hopefully this event will help to establish a connection for (under-represented) Pulaski County students to one day arrive at UGA.”

More information about the Archway Partnership, a unit of Public Service and Outreach at UGA, can be found at www.archwaypartnership.uga.edu.

Additional information about the Office of Institutional Diversity and the African-American male recruitment program can be found at http://diversity.uga.edu/programs/GAAME/.