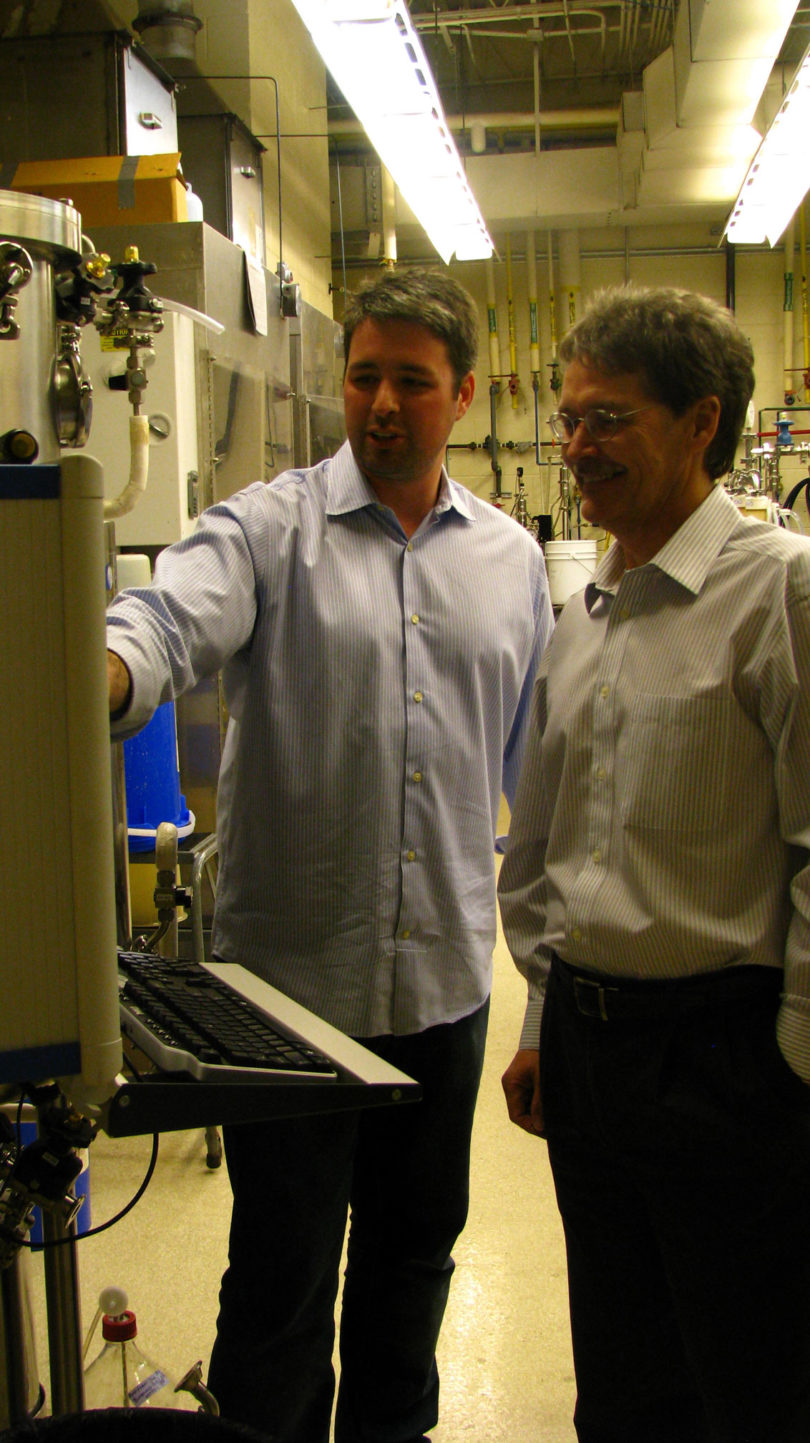 Chris Hopkins, a biochemistry and molecular biology doctoral candidate, is well-acquainted with the demands of working with his former undergraduate adviser and current major professor, Michael W. W. Adams.

“The man is incredible,” said Hopkins. “Every second of his day is scheduled.”

Adams, Georgia Power Professor in biotechnology, rushes between meetings and appointments while heading the Adams Laboratory in the Davison Life Sciences Complex.

Although Hopkins will likely finish his dissertation this spring, Adams and Hopkins may continue their partnership well past his graduation date. Adams, Hopkins and William Lanzilotta, an associate professor of biochemistry and molecular biology, hope to capitalize on their alternative energy research findings on hyperthermophiles, a unique type of robust microorganism.

Hyperthermophiles live in extreme environments, even thriving in temperatures up to 100 degrees Celsius.

“Adams is exploiting hyperthermophiles using in vivo biofactories to create bioproducts, like isobutanol, and other fuels that could replace oil,” said Hopkins.

In certain cases, said Hopkins, hyperthermophiles are the best source of enzyme-producing microorganisms and can metabolize various sources of biomass to produce hydrogen.

According to Adams, these biofuels and alternative energies will be adapted out of necessity.

“Over the next decade, in spite of politics, there will have to be a major push for alternate fuels, and more than one kind of them,” said Adams. “People make the mistake of seeing one solution. The other mistake, or misconception, is thinking that next Monday we will stop using oil and gasoline. It’s not going to happen.”

The key, according to Adams, will be to create biofuels that directly replace fossil fuels.

“People expect their oil and gas motors to run another 10 or 5 years,” he said. “Alternative biological fuels mean alternative ways to produce gasoline and diesel.”

Soon, the three UGA researchers plan to apply for a Small Business Innovation Research grant from the U.S. Department of Energy. SBIR grants provide promising small business energy companies with up to $1.2 million over several years.

The small business would expand on their genetic research concerning the enzyme hydrogenase.

Recently, hydrogenase has attracted attention for its potential to produce hydrogen with the new-found ability to readily manipulate the enzyme. Engineered autotrophic microorganisms that perform photosynthesis and produce the hydrogenase enzyme have the ability to consistently generate hydrogen gas from sunlight and water. According to Hopkins, the Adams Lab is one of the first groups to successfully modify the genetic information of hydrogenase in Pyrococcus furiosus, an archaeon originally found in hydrothermal sea vents.

“Today, we know how to manipulate Pyrococcus to make hydrogen or to use hydrogen to eventually make bioproducts,” said Hopkins.

Like Pyrococcus, many hyperthermophiles are archaea. Archaea are classified in their own biological domain due to significant differences from bacteria in their biochemistry and genetic information.

Through metabolic engineering, Pyrococcus can be designed to create hydrogen energy or use carbon dioxide to produce bioproducts, like biofuels, biochemicals or biodegradable plastics. The archaeon’s flexibility makes it attractive to alternative energy researchers. “If you can use carbon dioxide to supply the production of bioproducts, you could potentially close the loop on pollution and have carbon-neutral emissions,” said Hopkins.

While finalizing his post-graduation plans, Hopkins is hopeful he and Adams will continue pursuing the possibilities of their current research. “Adams is a really smart guy,” said Hopkins. “If something is going to happen, he’s definitely the guy to have on your side.”