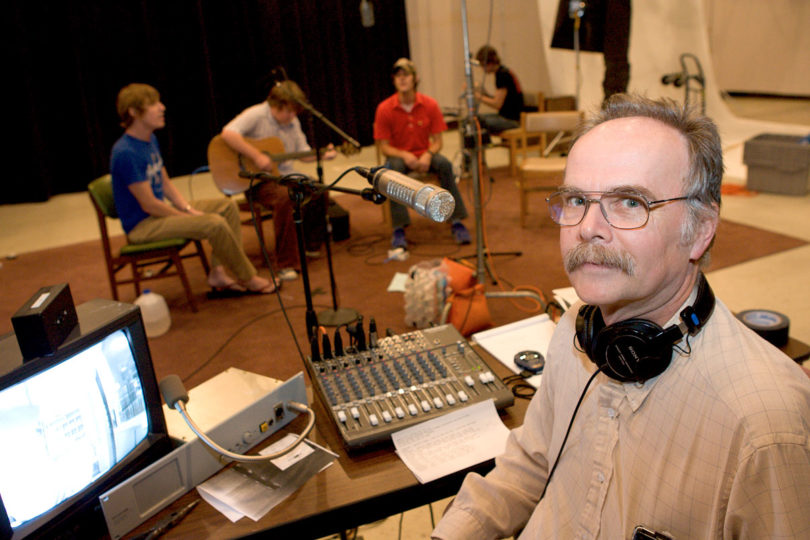 And not just this Friday, but every Friday for the past seven years, as he hosts the weekly radio show for WUGA 91.7/97.9 FM.

Holmes, the station’s program director, is the voice behind the show that hosts all kinds of musicians—from local rock bands to visiting marimba players—as they discuss their craft and perform selections. The show airs live every Friday at 4 p.m. on the radio and University Cable channel 15.

Holmes also is on the air Monday through Thursday from 3-4:30 p.m. hosting daily programs that feature a mixture of classical music, National Public Radio and local Athens news, along with occasional announcements or interviews with musicians or artists. As the station’s operator at that time, he “runs the board,” and operates the controls that determine what source is on the air at any given time.

He recently was named the Athens Banner-Herald’s 2009 Readers’ Choice favorite local radio personality. The award is voted on by community members.

“I am stunned to have been voted the No. 1 personality, since I don’t do the things that are usually considered to display personality on the air,” said Holmes. “But what’s really important to me is that WUGA has been chosen the No. 1 local radio station for four consecutive years.”

As program director at WUGA, Holmes is responsible for deciding the overall music schedule and which shows to add or cancel. He  also serves as the station’s music director, choosing the music to be aired daily, which he tries to have picked out in advance.

Holmes was first on the air in Athens in 1972, when he was a UGA student and worked at Athens station WDOL as “Roger Holly” and UGA’s then-new student radio station WUOG—competing radio stations at the time. In the early hours of Monday morning, Holmes would sign off at WUOG at 1 a.m. and would be back on the air at WDOL at 6 a.m.

“Because WDOL’s manager hated the idea of competing with a student radio station, I had to keep my role at WUOG secret. I went by the name of ‘John Hogg’ and tried to disguise my voice,” said Holmes.

Holmes got his first break into radio when a Griffin radio station where he spent a lot of time hanging around lost its 15-year-old announcer to a competing radio station. “Desperate to fill the shift,” Holmes said they decided to give him a chance.

His career had taken him in different directions, but in 1980 he came back to UGA. He worked as the booth announcer for channel 8, the public television station that was then operated by UGA. He became a full-time employee in 1982 and later helped start WUGA, which officially became a radio station in August 1987.

“I am very pleased, though, to have been part of the beginning of both UGA radio stations,” he said.