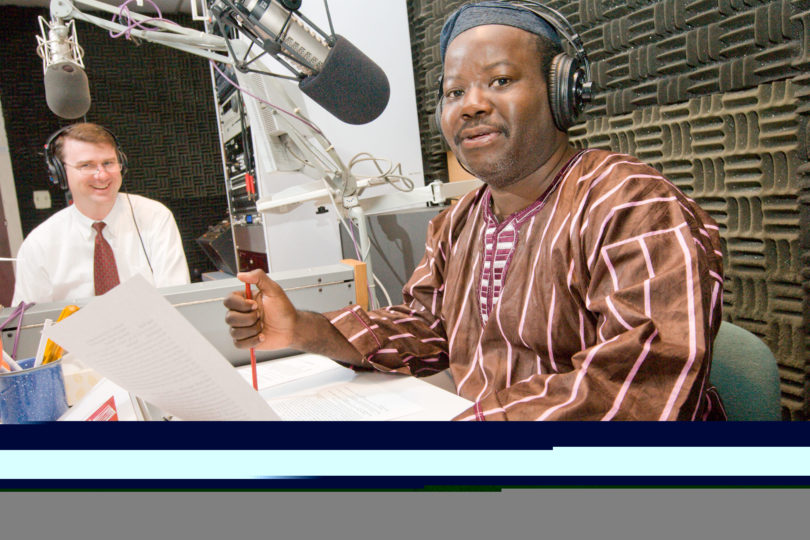 When Akinloye Ojo came to university radio station WUGA in 1997 with a proposal for a show about African music and culture, station officials were happy to give the young graduate student air time and figured he might last a couple of years.

Ojo, with no radio experience but lots of enthusiasm, assumed he’d do the show until he ran out of ideas or a better opportunity came along.

So when “African Perspectives” marked its 10th year on the air last month, it was a notable anniversary for both the station and the host.

“It’s something that’s unique. I don’t think there’s anything else around like it,” said Robb Holmes, WUGA program manager, about the show, which is now the second-longest-running locally produced show the station has ever broadcast.

With a lively mix of African music, commentary and guest interviews, “African Perspectives” has built a loyal audience on WUGA, the local National Public Radio affiliate. Though the station doesn’t track listenership, Holmes said phone calls, e-mails and other responses indicate a large number of people hear the show.

Ojo, a native of Nigeria, was a doctoral student and cultural secretary of the African Student Union when he came up with the idea for the show. Though his father had worked in radio and television in Nigeria for more than 30 years, Ojo had almost no radio experience when he approached WUGA.

Holmes said the station agreed to try the show because there was a lot of interest in Africa and a market for African music.

Ojo had a large collection of African music and originally planned the show to be almost exclusively musical. While music is still a major component, he expanded the format to include information about African history and culture, and commentary on news and events in Africa. He also opened the show to guests who discuss developments in government, politics, education, culture and other facets of African life.

“We try not to get into controversial issues,” said Ojo, who writes his scripts but doesn’t prepare questions for guests, striving instead for spontaneity and informality. “We try to focus more on education about Africa and celebrating the good things about Africa.”

African customs, religions, ­literature and popular culture are frequent topics of discussion. Ojo, who received his Ph.D. in 2001 and is an assistant professor in the comparative literature department, specializes in African studies and the Yoruba language, spoken primarily in Nigeria, Benin and Togo as well as Brazil and parts of the Caribbean. He likes to educate listeners about African languages, and opens and closes shows with welcomes and farewells in Yoruba, Swahili, Zulu, Hausa, Amharic or Igbo as well as English.

But he also tries to keep the show topical. He’s had pointed discussions about such issues as independence of African nations and events such as the deaths of thousands in the Darfur region of Sudan—discussions that sometimes spark disagreement from listeners. Holmes said the point is to provide information and not take political sides, and he credits Ojo with doing a good job of maintaining balance and neutrality.

Holmes said it’s unusual for a locally produced show to stay on the air for 10 years. Only “Invitation to Jazz,” featuring the late Roger Dancz, had a longer run on WUGA at 11 years.

“It’s very demanding to do a show week after week,” said Holmes. “Still being fresh after 10 years is a rarity, but maintaining consistent quality over that time is nearly unheard of. But Ojo manages to knit together some very diverse strands week after week, year after year. He’s providing an important service to members of the international community with roots in Africa, and at the same time reaching out to the rest of us, raising our awareness and appreciation.”