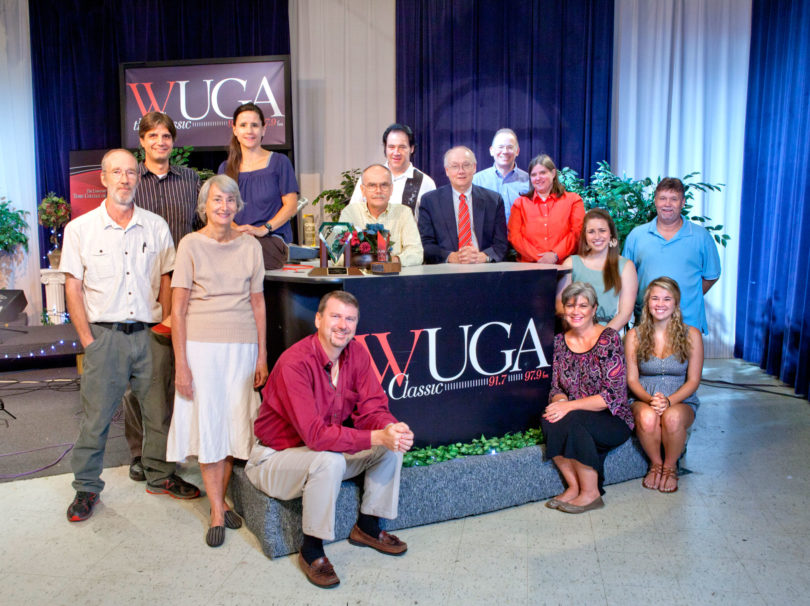 WUGA-FM is an affiliate of National Public Radio

Editor’s note: Robb Holmes, who until recently served as music director of WUGA-FM since the station was founded and continues to host the popular music show “It’s Friday!,” provides a retrospective of a quarter century of broadcasting.

Just before 6 a.m. on Aug. 28, 1987, WUGA-FM signed on for its first day of broadcasting to Athens and the surrounding area. To our listeners, WUGA’s history begins at that moment, but for many who played a part in bringing the radio station to life, the story began much earlier.

By the early 1980s, public radio had become an important part of the American cultural scene. Established in 1971, National Public Radio was a presence in most major metropolitan areas and at institutions of learning and research. Its absence at UGA was becoming increasingly conspicuous and was sometimes cited as an obstacle to faculty recruitment.

A grant from the W.K. Kellogg Foundation to UGA in 1984 designated funds for a public radio station. In 1985, the Georgia Public Telecommunications Commission created Peach State Public Radio, now GPB Radio, with the mission of bringing public radio to as many Georgians as possible. On Sept. 1, 1986, WUGA became an entity and consisted of an office occupied by two people. The process of becoming a radio station would take almost a year.

In its first 10 years, WUGA had some proud moments. The news department received national recognition for its local news programs. Beginning on the first day of broadcasting, “Centerlines” was a daily 15-minute magazine of local news and events. It was replaced in 1992 by “The Commons,” a daily half-hour program that was twice judged best in the nation by public radio news directors around the country.

By the station’s 15th anniversary in 2002, the full-time staff was the same size it had been in the beginning. In fact, during the state budget crisis of 2004, the leadership of the Georgia Center found it impossible to continue to fund WUGA. However, UGA’s Office of Public Affairs stepped in and assumed responsibility for the station and its staff. WUGA kept its existing office and studio space in the Georgia Center.

WUGA-FM’s program schedule now mirrors the schedule of the rest of the GPB radio network more closely than it had for most of the past decade, while it continues to offer a number of programs, locally-produced and otherwise, that are not heard elsewhere in Georgia.

I am happy to say that I feel that this radio station, which has played a huge part in my life, is in good hands.