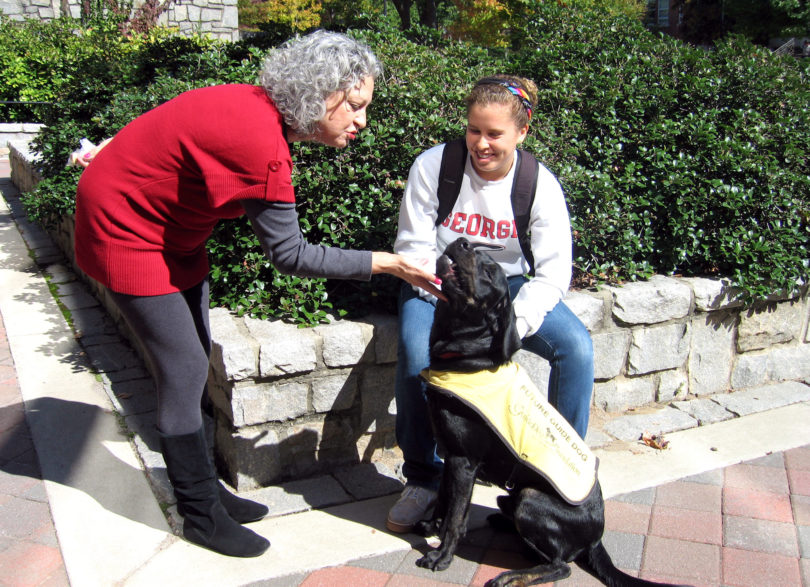 Athens, Ga. – First-year University of Georgia College of Pharmacy student Mallory Nelson has always loved dogs, so it’s not a stretch of the imagination that she’d have one living with her during college. The unusual part is that she’s training Pepsi, a black Labrador puppy, to be a guide dog for a disabled person.

“I first saw the guide dogs on the UGA campus about two years ago and was curious about them,” said Nelson, who found information about the Guide Dog Foundation for the Blind on the Internet. “Pepsi is actually the second dog I’ve trained; Ivory, a yellow lab, was the first.”

Raising the puppies is a full-time responsibility that requires constant companionship and complete dedication to their training, she said. Also, applicants themselves must go through a rigorous training period to make sure they’re suited to be raisers. They’re tested on their handling skills with dogs of different breeds and different personalities, assessed on their experience with dogs so that they can be matched according to skill level and evaluated during a home visit to make sure the puppy’s environment is suitable.

At seven to eight weeks, puppies begin their training, which lasts about a year. The program teaches them how to adjust to different environments, remember basic commands, memorize new routes, locate physical structures-such as doors, chairs, ramps and elevators-and react appropriately to safety concerns.

“Pepsi has an easy temperament and enjoys meeting students around campus,” Nelson said. “Each day we either walk to class or ride the bus. During class Pepsi usually sleeps.”

The New York-based Guide Dog Foundation for the Blind has around 75 puppy raisers in the Athens area, the largest group of raisers anywhere in the U.S., said Jessica Jones, the foundation’s area coordinator.

Only the most suitable dogs are placed with blind handlers, where they’re expected to remain healthy companions for at least seven years. Upon placement, the dogs undergo another three to four weeks of training to learn the new handler’s patterns and routes.

“We try to place the perfect dog in the best possible environment,” Jones said, adding that prospective blind handlers must have a stable lifestyle and prove themselves to be good candidates for companion dogs. “We’re one of only a few guide dog schools that pay all expenses for the blind handlers to receive a guide dog.”

Dogs not selected for service for the blind may become VetDogs, a program also run through the Guide Dog Foundation. In this role, dogs are used for balance or as retrievers for veterans with disabilities.

If a dog is not deemed suitable for service after finishing training, their raisers may have first option for adoption. Sometimes the dogs themselves develop physical problems or illnesses; others, like Pepsi, are deemed more suitable as breeders.

“During his year in training, Pepsi was chosen to become a breeder rather than a companion dog due to his good hips and temperament,” Nelson said.

Whether her dogs are chosen as guides or breeders, Nelson has enjoyed the adventure of being a raiser. “This entire experience has been so rewarding,” she said. “I was so honored to be able to attend my last dog’s graduation in New York where I met his new owner. Everyone is so dedicated and appreciative. I definitely expect to raise another guide dog.”