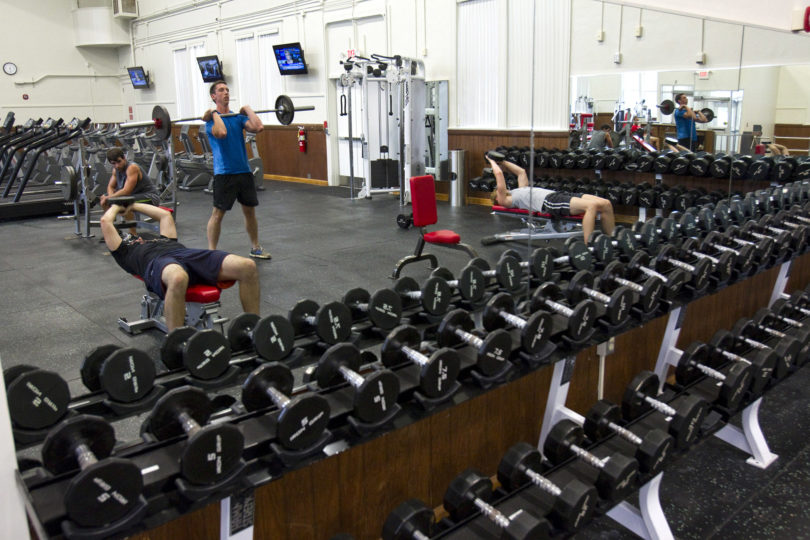 Students work out in Pound Hall at the UGA Health Sciences Campus.

As UGA students, faculty and staff keep hammering away at their New Year’s resolutions, one facility might make exercising easier and more accessible to the campus community.

UGA’s Pound Hall, a satellite facility for the Department of Recreational Sports located on the Health Sciences Campus, provides another spot on campus to get in a workout. It opened in fall 2012 and contains a variety of workout equipment as well as a regulation-size basketball court.

“For us, Pound Hall is an opportunity to put the Ramsey experience on the Health Sciences Campus,” said Brian Williams, senior associate director for facilities in the Department of Recreational Sports. “It’s open to all fee-paying Ramsey members, but it’s mainly utilized by staff, faculty and students on that campus.”

The facility has equipment very similar to the Ramsey Center, Williams said, although things are not identical.

“Although some of the equipment there is different, we provide the same great experience our patrons are used to,” he said.

During Pound Hall’s first year, the Department of Recreational Sports learned a lot about operating a facility used more by a specific population.

“With the majority of the students there being med students, we found that they operate a little different than typical undergraduate and graduate students,” Williams said. “For them, school is like a full-time job, so finding time to exercise can be a challenge.”

Williams said some former Ramsey Center employees were instrumental in getting feedback from the students visiting Pound Hall. That feedback, primarily that the hours needed to be extended, led to the decision to keep the facility open longer. Pound Hall is now open Monday through Thursday 11 a.m. to 9 p.m. and 11 a.m. to 7 p.m. on Fridays.

“It’s not completely crowded; you can do what you need to do and get out quickly,” Williams said. “I think we’ll be able to accommodate three to four times our current users there.”

While the number of campus members using Pound Hall is increasing, the facility also is host to more programs and events. Just this semester two Zumba classes started at Pound Hall in addition to yoga classes.

Despite the added users, Williams is confident his “more seasoned staff members” will be able to keep providing the great service their members expect.

“For me, my main concern is to maintain our quality of service,” he said. “It’s imperative that we continue to provide our patrons with quality programs and facilities.

“We’re here to help people adopt healthy lifetime behaviors, and we do that best through facilities like Pound Hall,” Williams said.