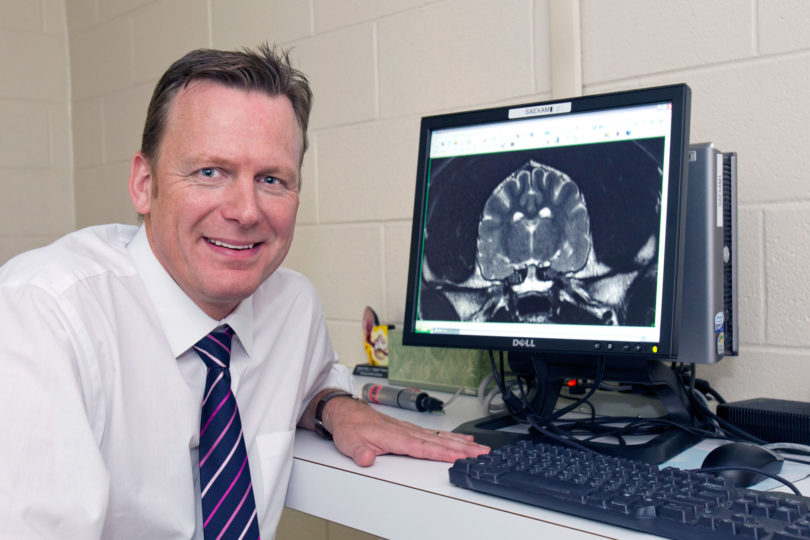 While he always possessed a natural interest in science and biology, there was one nonscience career Platt considered in his youth growing up in England: that of an Air Force pilot, like his grandfather.

“But he dissuaded me,” Platt said. “He said I’d get shot down and die. I was about 8 years old. It was quite powerful.”

So Platt pursued medicine instead. He made it all the way through veterinary school and was well into an internship in small animal medicine and surgery at the Ontario Veterinary College when he was assigned to the college’s neurology service for several weeks. Those few weeks began to chart the course for his career.

After that internship, Platt returned to the U.K. to work in private practice.

“And I saw all the neurology cases, but I got a bit frustrated because I really couldn’t work them up very well and didn’t have the equipment at hand, the knowledge and expertise, so I went to a few neurology continuing education courses and realized that I wanted to pursue a residency,” he said.

In 1995, Platt entered a residency at the University of Florida, where he studied for three years under Dr. Cheryl Chrisman.

“After six months, she was so inspirational, I knew I wanted to stay in academia,” he said.

He accepted his first teaching position at UGA’s College of Veterinary Medicine in October 1998, but left two years later to lead the neurology/neurosurgery unit for the Animal Health Trust Centre for Small Animal Studies in Suffolk, England. A desire to further his research led him back to the U.S. and to UGA in 2006, following a call from Sheila W. Allen, dean of the veterinary medicine college. She encouraged him to apply for a neurology faculty position.

“We were sorry to lose Dr. Platt in 2000,” Allen said. “He was an excellent instructor, and we were thrilled to be able to recruit him back to UGA.”

“I was brought up in a working-class environment in England,” he said. “When I was growing up, many people were told, ‘You’ll never be good enough to be in a profession, let alone to be in academia.’ Because of what I’ve achieved, I get fulfilled by enabling others to achieve things they may not have thought possible.”

Platt is working on a clinical trial for dogs with gliomas, the most common form of primary brain tumors affecting humans. The trial, being conducted in partnership with the Emory University School of Medicine’s Department of Neurosurgery, offers a glimpse into how Platt’s work is helping dogs and may one day help humans, too.

With the help of the Boo Radley Foundation and referring veterinarians, dogs with gliomas are being identified and enrolled by their owners in these trials, which call for the surgical resection of a glioma, followed by the novel delivery of a single dose of the drug Cetuximab to the tumor’s site. Some of these canine patients are living a high quality of life a year after their surgery.

While research collaborations will benefit both animals and humans, veterinary neurologists also must find more ways to work together to create a greater knowledge base about cases and conditions, according to Platt.

“Multi-center collaborations are likely the future for those of us who practice veterinary neurology,” he said, “because we have to address questions that relate to improving the diagnosis and treatment of our diseases by using as many cases as possible, with as varied a demographic as possible to make it realistic.”