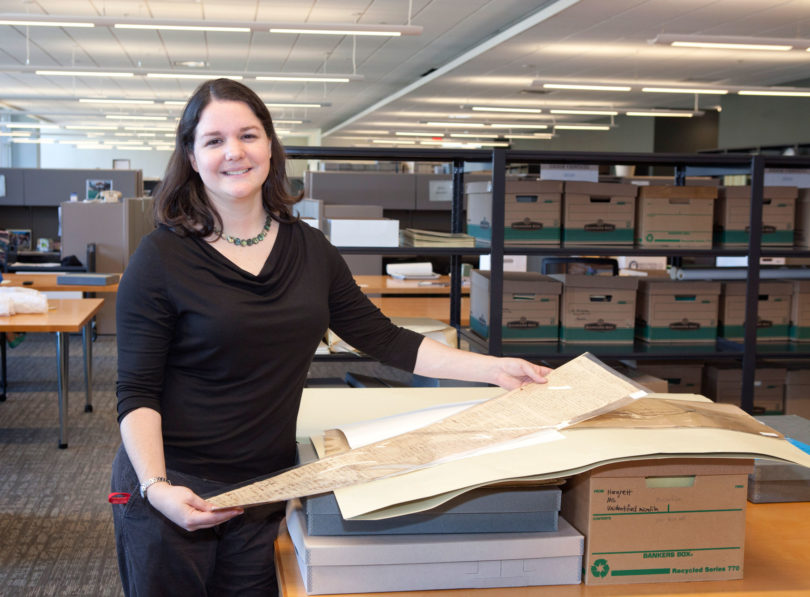 Growing up in Effingham County, near Savannah, Renna Tuten was very familiar with the drawing of Savannah in its very earliest days as a colony; its now-cherished squares containing a few Spartan houses, the clearing surrounded by tall pines.

That original 1734 drawing is one of the rarest items in the Hargrett Rare Book and Manuscript Library. It was taken back to the colony’s trustees in England to report on the settlers’ progress. Tuten had never seen the original before the exhibits in the Richard B. Russell Building Special Collections Libraries were revealed at its dedication last month. (The Richard B. Russell Building Special Collections Libraries, including the galleries with permanent and rotating exhibits, is open to the public weekdays 8 a.m. to 5 p.m. and Saturdays 1-5 p.m.).

“I had grown up seeing (replicas),” Tuten said. “When I saw the real thing, it was major. It was really special.”

Tuten is the reference archivist at the new research, archives and museum facility, after working in the Russell Library for Political Research and Studies since 2006.

“If I had known what it was called when I was 7, this (archival work) is what I would have wanted to do,” she said. “Doing reference is a lot of fun because you learn something new every day and if you try hard you can learn more than one thing.”

She assists a variety of people-professors, authors, genealogists, retirees and, of course, students-who come to the Russell Special Collections Building to do research in the three special collections, which also includes the Walter J. Brown Media Archives and Peabody Awards Collection.

After earning a degree in art history at UGA, Tuten was interested in graduate school when she learned of the Southern studies program at the University of Mississippi.

Rich in history as the home of William Faulkner and the national blues collection, the university also holds the papers of James Meredith, the first African-American student admitted to the University of Mississippi, an event considered a turning point in the civil rights movement.

“I remember opening a box and seeing a canister that had tear gas in it that someone had saved (from the unrest surrounding the integration),” she said. “That was a big moment, realizing these things need to be preserved.”

Tuten had no special interest in politics when she began working at the Russell political library, but came to view the players differently through their collections.

“It is interesting. It’s another lens through which you can look at everyday issues,” she said. “It’s a great way to learn the history of our country.”

One remarkable collection Tuten processed was that of former Georgia governor and U.S. Sen. Zell Miller.

A curious find came in the collection of Lamartine Hardman, a physician and former Georgia governor. The Smithsonian directed an archaeological dig in the early 1900s on land Hardman owned with an Indian mound. Georgia travelers will recognize the sight near Sautee-Nachoochee as a mound with a gazebo on top. Mixed in the Hardman artifacts was a pot shard Tuten feels certain was unearthed in the dig.

“So this piece of pre-Colombian Georgia is mixed up in this collection of someone who was governor in the 1920s, when there were automobiles and radios,” Tuten said. “And it had to come from that land mound that everyone drives past on their way to Helen. How fascinating is that? “