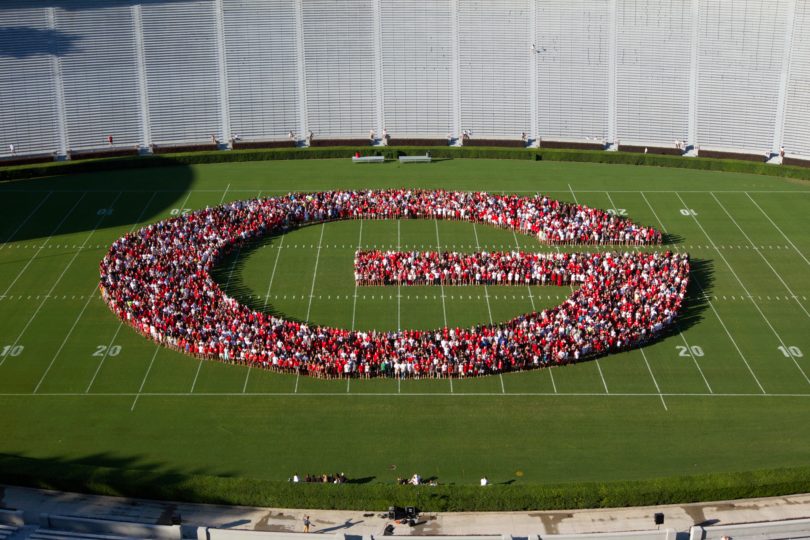 Students in the Class of 2017 form the "power G" logo on the field at Sanford Stadium Aug. 11 during the Freshman Welcome ceremony.

Class of 2017 introduced to university traditions at Freshman Welcome

For many students in the Class of 2017, their college careers will begin and end on the field at Sanford Stadium.

It was there that they were reminded on Aug. 11, the evening before classes began, that it will be what they do during the time in between-in classes and in student organizations-that will have a lasting impact.

It has long been the tradition to hold spring Commencement at Sanford Stadium, with graduates seated between the hedges on the field. Now, for the third year, the university invited first-year students to gather on the field as part of the Freshman Welcome event, organized by the Office of Alumni Relations and the Student Government Association.

As part of that tradition, the Class of 2017-aided by members of the Redcoat Marching Band-formed a giant version of the UGA “power G” logo centered on the 50-yard line. The formation encompassed nearly the entire field.

UGA ushered in the incoming class of first-year students with an introduction to some football traditions led by Brook Whitmire, Sanford Stadium’s public address announcer, and a few challenges from university leaders.

UGA President Jere W. Morehead addressed the class by congratulating them for being the most academically qualified-having the highest GPA and standardized test scores-to enter UGA.

With that distinction in mind, Morehead asked them, “What are you going to do with those academic qualifications?”

He encouraged the students to challenge themselves to work even harder.

“Use that potential, use that ability to chart new courses of actions, to reach new heights in your academic career,” he said.

UGA head football coach Mark Richt challenged first-year students to show up to games at Sanford Stadium early, loud and ready to cheer on the Bulldogs.

However, Richt also had another lesson for the students. He implored them to remember their family values and their faith as they begin their college careers.

Austin Laufersweiler, president of the university’s Student Government Association, encouraged students to take advantage of the numerous student organizations at the university.

“Involve yourself in something bigger than you,” he told them. “Find something that matters to you and pursue it.”

The Freshman Welcome has become a popular event for first-year students.

While the chance to join their classmates on the field may have been what drew students to attend, the messages delivered by both university administrators and their peers resonated with students like Allie Harbert, from Orlando, Fla.

Even though she heard similar messages from her parents, Harbert said she liked Richt’s message of holding tight to values.

“You don’t want to lose yourself in the process,” she said.