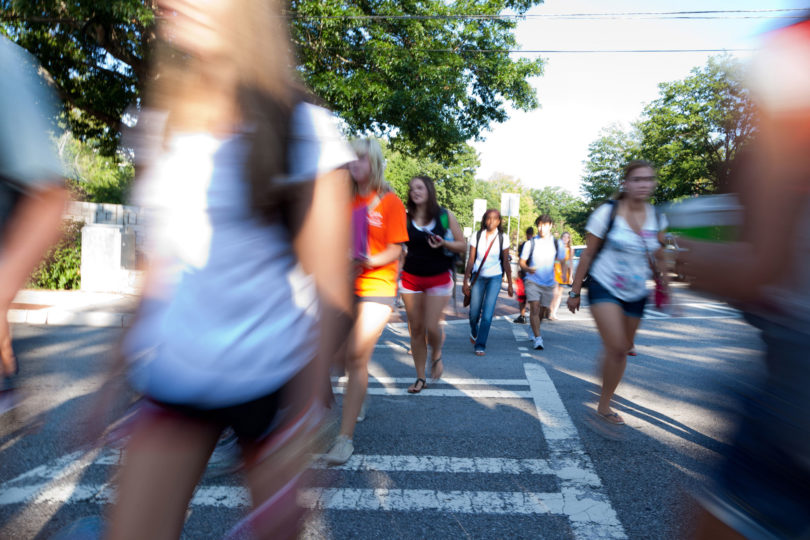 All incoming freshmen will participate in the First-Year Odyssey

A record number of new students have arrived on campus as fall semester classes get under way. According to data from the Office of Undergraduate Admissions compiled in early August, more than 5,500 freshmen-an increase of more than 10 percent over last year-will be enrolled. The number of new transfer students remains stable at around 1,400.

“This year’s class will set new benchmarks for the institution in many aspects while maintaining the academic excellence that has become associated with UGA on both state and national levels,” said Nancy McDuff, associate vice president for admissions and enrollment management. Those benchmarks include:

• The largest number of Georgia residents enrolled at UGA, with close to 4,900 new in-state freshmen and more than 1,300 in-state transfer students. Based on the projected number of high school graduates in Georgia in 2011, one in 20 will be enrolled this year at UGA.
• More than 480 first-year African-American students enrolled in fall 2011 (8.7 percent of the class). The previous high for entering freshmen was 440 in 1995. A record number of Hispanic students will be enrolled, with 300 entering first-year students having self-identified as Hispanic (5.4 percent of the class). With more than 1,400 of the entering freshmen self-identifying as other than Caucasian, the ethnic and racial makeup of the entering class shows record diversity.

For those students who took the ACT, the mean score this year was 28, with a mid 50th percentile range of 26-30. Approximately 37 percent of the students were admitted based on ACT scores.

“In a year of continuing economic uncertainty and significant adjustments to the HOPE scholarship, it was difficult to predict the impact this would have on our yield rate,” McDuff said. “But our goal was to continue to serve the state and maintain our commitment to excellence and academic achievement.”

The university continued to strengthen ties throughout the state, with students coming from 488 of the 796 high schools in Georgia and 142 of the 159 counties. About 12 percent of the class comes from other states and countries, with 223 of the incoming freshmen representing 51 different home countries. Almost 7 percent come from families where English is not the native language. For the first time in several years, men will make up 40 percent of the freshman class. Approximately 5 percent of the incoming freshmen are the first in their immediate family to attend college.

The 531 students enrolled in UGA’s nationally recognized Honors Program have a GPA of 4.03 (with a mid-50 percentile range of 3.95-4.13) and SAT average of 1453 (mid 50th percentile range of 1430-1490 on the critical reading and math components only). The ACT average is 33 (mid 50th percent range of 32-33).
The rigor of students’ high school curriculum continues to be a key factor in admissions decisions, with some 95 percent of the students having enrolled in College Board Advanced Placement or International Baccalaureate classes while in high school.

More than half of the incoming first-year class were in the top 10 percent of their high school class and 225 freshmen were first or second in their graduating class. Several students had a perfect composite score on the SAT or ACT and 136 had perfect scores on at least one of the components of the SAT. Nearly 10 percent of the students started college while still in high school.

All incoming freshmen will participate in the First-Year Odyssey (https://fyo.uga.edu/), a new program designed to introduce students to the academic life of the university by putting them in small group seminars taught by tenured and tenure-track faculty on topics tied to their area of scholarship.