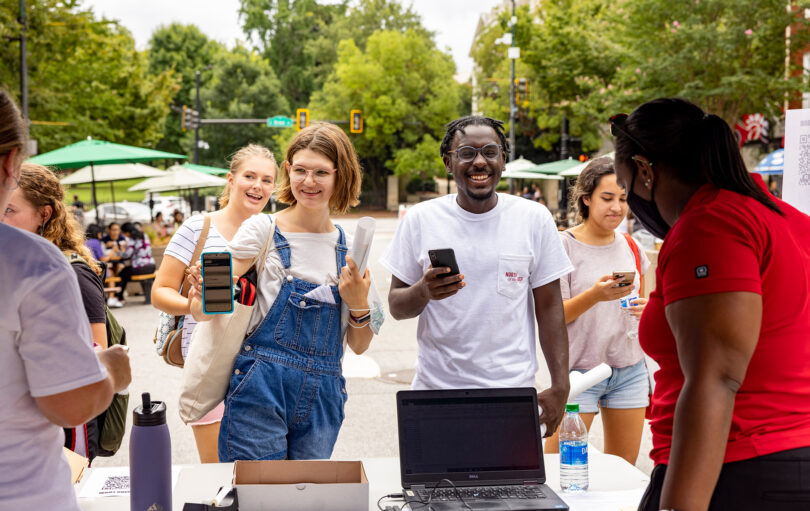 UGA students check in at the fifth annual North of the Arch event in College Square in downtown Athens. (Photo by Dorothy Kozlowski/UGA)

More than 400 University of Georgia students, ranging from newly admitted to graduate students, visited 26 local businesses in the downtown Athens district on Monday, Aug. 16, as part of North of the Arch 2021.

The event—sponsored by the UGA Office of Government Relations, UGA Student Affairs and the Athens Downtown Development Authority (ADDA)—traditionally welcomes first-year students, hallmates and friends, but shifted this year to welcome all students back to Athens. Participating locations included restaurants, boutiques, churches, gyms and more.

“North of the Arch is an incredibly impactful event for our downtown Athens businesses,” said Linda Ford, director of business services at ADDA. “Many students are introduced to some of their favorite restaurants, shops or entertainment venues through this event, and we are happy to co-sponsor the event each year.”

Students participating in North of the Arch who visited at least 10 of the 26 participating businesses and took photos at each location were entered to win over 20 raffle prizes, including a signed Kirby Smart football, free exercise classes, gift certificates to downtown businesses, UGA parking and dining coupons, T-shirts and other prizes. Participants could earn additional raffle entries for visiting all 26 locations and posting to social media using the event hashtag. 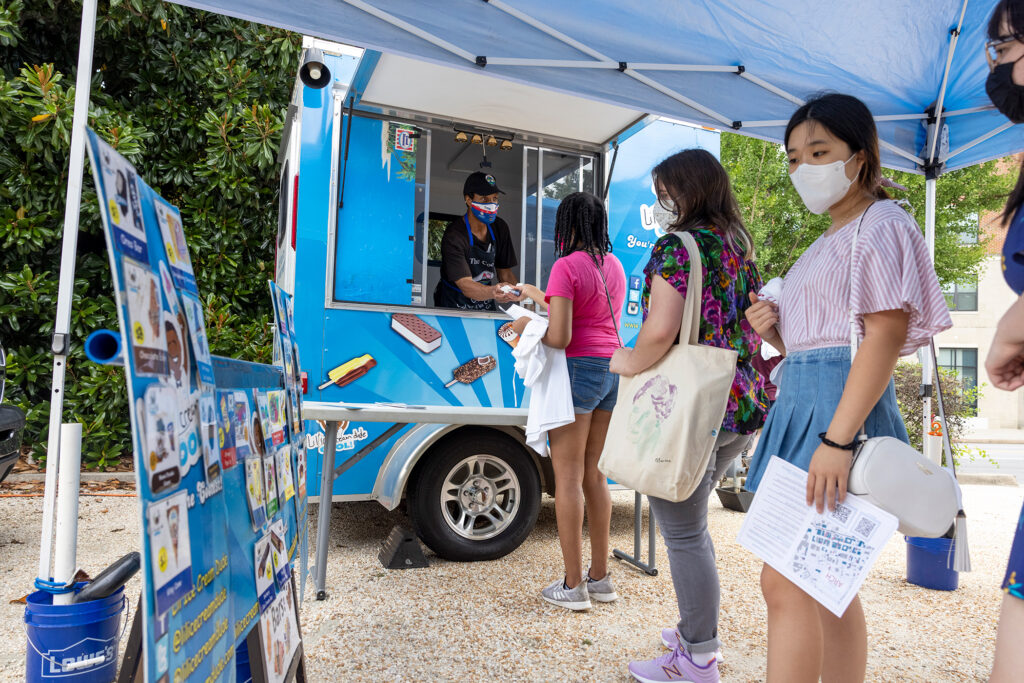 UGA students line up for a sweet treat from Lil Ice Cream Dude, a small business in Athens, at the 2021 North of the Arch event. (Photo by Dorothy Kozlowski/UGA).

Students took away more than prizes from North of the Arch. For many, the event is an introduction to the local business landscape and Classic City culture.

“I am originally from Greenville, SC, so I didn’t know the area or many people when I came to UGA as a freshman in 2018,” said fourth-year student Grace Gumpert, who has attended North of the Arch each of her four years in Athens. “I saw the welcome event on the UGA calendar and invited someone from my hall to go with me. I’ve enjoyed going back each year to explore all over again and see the new stores that have popped up. I came back this year as a senior and invited my roommates who had never been, and we all had a blast.”

UGA’s more than 35,000 students live, work, volunteer, shop and engage in the community. Students are a significant driver of the Athens economy, spending almost $496 million locally each year.

“We are really indebted to UGA students for their impact on our local economy,” said David Bradley, president and CEO of the Athens Area Chamber of Commerce. “UGA students have a substantial impact on businesses in downtown Athens. They also bring a creativity to the area that then attracts other people to Athens.”

The sixth annual North of the Arch event is expected to be held in August 2022.