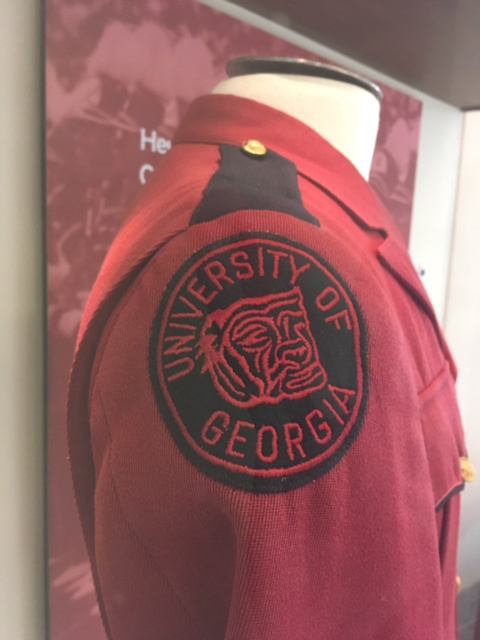 Keep your seats .... looks back at the UGA Redcoat Marching Band's history

For decades, fans in Sanford Stadium have been told, “Keep Your Seats Everyone …The Redcoats are Coming!”

This fall, the colorful history of the UGA Redcoat Marching Band will be on display in the rotunda of the Richard B. Russell Building Special Collections Libraries. For several years, there has been a football-related exhibit drawn from the UGA Athletic Association Archives, a part of University Archives. This year’s exhibit materials are from the Redcoat Band.

Tours of the exhibit will be offered Fridays at 3 p.m. before each home football game.

The Keep Your Seats exhibit features memorabilia, photographs, uniforms and sheet music celebrating the 110-year history of the band. An original copy of the “Red & Black March,” the first music composed specifically for UGA, will be on display. The sheet music, composed in 1908, was thought to have been lost but was discovered by a graduate student researching his dissertation and donated to the Hargrett Rare Book and Manuscript Library. Sheet music composed for the Redcoats by longtime director Roger Dancz also is included.

Highlights of the exhibit include photos of the band through the years, from its beginning in 1906, and the Sudler Trophy, given by the John Phillip Sousa Foundation to recognize special merit. UGA became the first SEC school to win the Sudler Trophy when it was awarded in 2000.

“There are also band, flag line, Georgette and featured twirler uniforms from different eras of the band’s history,” said Jason Hasty, exhibit curator. “We hope visitors will come explore the traditions and people who helped make the band one of UGA’s most visible (and audible) symbols.”

The exhibit will be on display through Dec. 23.